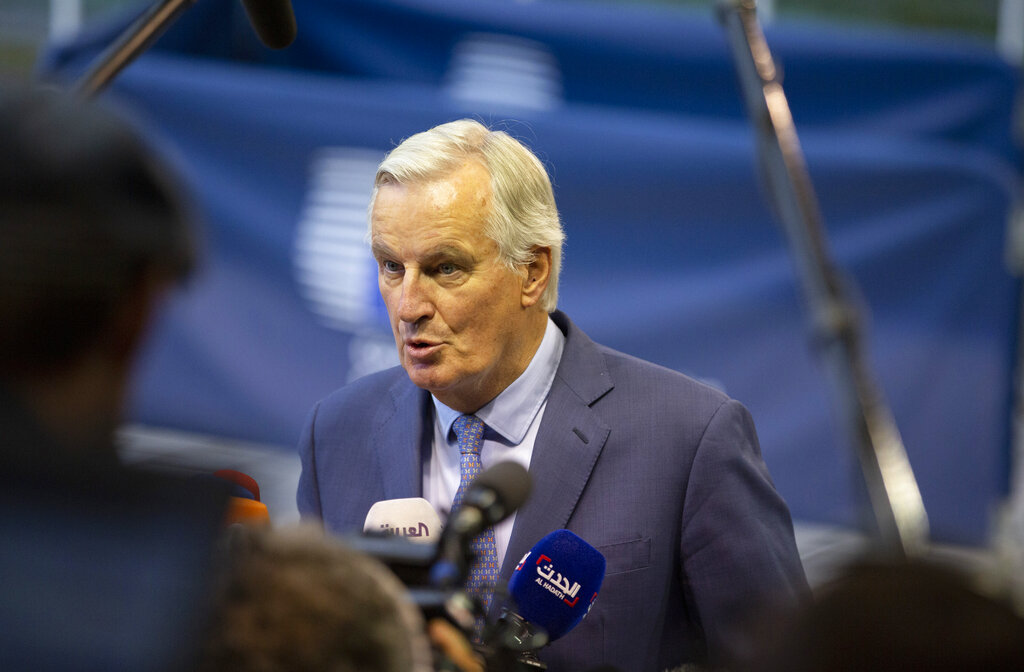 LUXEMBOURG (AP) — A Brexit divorce deal is possible ahead of Thursday’s European Union summit but the British government needs to move ahead with more compromises to seal an agreement in the next few hours, the bloc declared today.

A French diplomatic official says France hopes that a divorce deal with Britain will be negotiated by tonight.

Johnson’s spokesman says the U.K. wants to nail down a Brexit deal “as soon as possible and we want to make progress ahead of the EU council (summit) on Thursday.”

Spokesman James Slack said today: “We are working hard. The prime minister is aware of the time constraints that we are under.”

Even though many open questions remained, diplomats made clear that both sides were for the first time within touching distance since an earlier EU-U.K. Brexit withdrawal agreement fell apart in the British House of Commons in March.

EU Brexit negotiator Michel Barnier said ahead of a meeting of EU ministers that the main challenge now is to turn the new British proposals on the complex Irish border issue into something binding.

Barnier said it is “high time to turn good intentions into a legal text.” He wants a clear answer by Wednesday morning to tell EU capitals what should be decided once the bloc’s two-day summit kicks off Thursday.

Britain is scheduled to leave the EU on Oct. 31, and the EU summit was long considered one of the last possible chances to approve a divorce agreement to accommodate that timeframe. British Prime Minister Boris Johnson insists his country will leave at the end of the month with or without a divorce deal, but British lawmakers have been adamant on avoiding a no-deal Brexit.

Irish Foreign Minister Simon Coveney, who had a long, intense talk with Barnier early today, said from the EU side the belief is that “this is difficult, but it is doable.”

He said Barnier addressed EU ministers and “did point to progress in the last number of days where the gaps have been narrowed.”

Dutch Foreign Minister Stef Blok said the British proposals to keep the Irish border protected from smuggling and fraud once the U.K. leaves the bloc are insufficient so far.

“The U.K. proposal contained some steps forward but not enough to guarantee that the internal market will be protected,” Blok said.

“Even if an agreement will be difficult — more and more difficult, we think — it is still possible this week,” Barnier said.

One EU diplomat said for things to work, technical negotiators would need to finish their text and make it available in a secure room by 10 a.m. Wednesday so European governments have time to assess them.

EU ministers insisted it was time for Johnson to make the next move — and he seemed to be listening. The British leader had a phone call with French President Emmanuel Macron today to assess latest developments and shifted Britain’s weekly Cabinet meeting from today to Wednesday, so Johnson could give his ministers a better idea of Brexit progress.

Meanwhile, the insistence that the EU summit this week would be a cutoff moment for Brexit talks is quickly fading. Three EU nations have predicted the negotiations could spill over into next week.

Antti Rinne, prime minister of Finland, which currently holds the rotating EU presidency, said in Helsinki that he had given up hope for a quick breakthrough ahead of the Brexit summit.

“There is no time in a practical way, and in legal base, to reach an agreement before the meeting,” Rinne said. “We need to have more time.”

Blok, the Dutch minister, agreed, saying “let’s use the remaining time until Oct. 31.”

There has been increasing talk about having an extra EU summit close to the end of the month.