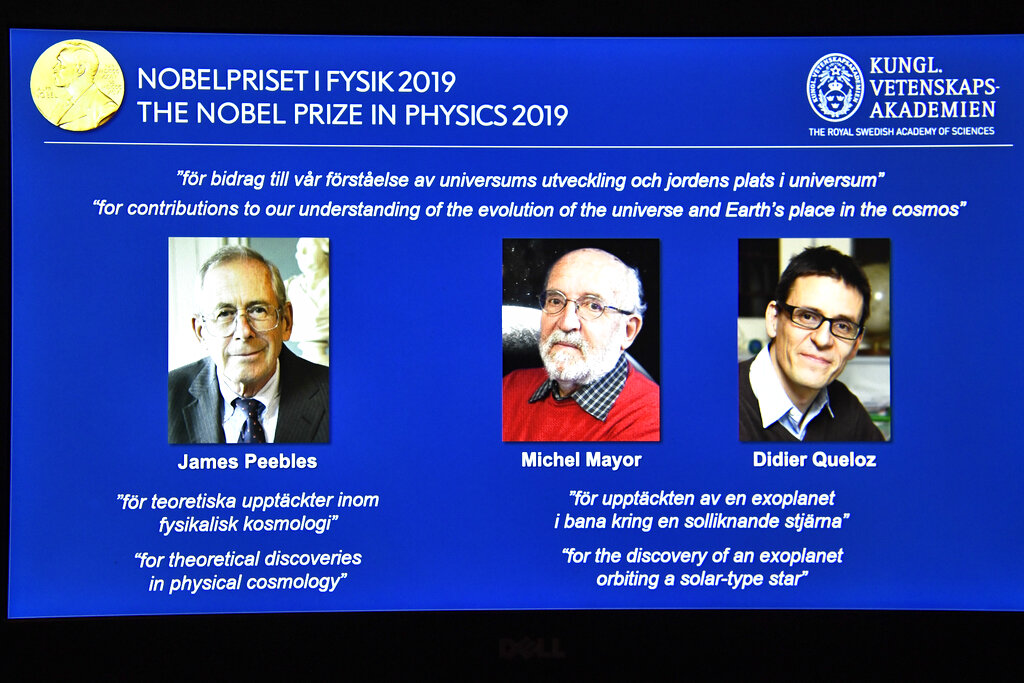 A screen displays the portraits of the laureates of the 2019 Nobel Prize in Physics, with left to right, James Peebles, Michel Mayor and Didier Queloz, during a news conference today at the Royal Swedish Academy of Sciences in Stockholm, Sweden. (Claudio Bresciani / TT via AP)

STOCKHOLM (AP) — A Canadian-American cosmologist and two Swiss scientists won this year’s Nobel Prize in Physics today for their work in understanding how the universe has evolved from the Big Bang and the blockbuster discovery of the first known planet outside our solar system.

Canadian-born James Peebles, 84, of Princeton University, was credited for “theoretical discoveries in physical cosmology” and Switzerland’s Michel Mayor, 77, and Didier Queloz, 53, each from the University of Geneva, were honored for discovering “an exoplanet orbiting a solar-type star,” said Prof. Goran Hansson, secretary general of the Royal Swedish Academy of Sciences.

Peebles, hailed as one of the most influential cosmologists of his time, will collect one half of the 9-million kronor ($918,000) cash award, and the Swiss men will share the other half.

The Nobel committee said Peebles’ theoretical framework about the cosmos — and its billions of galaxies and galaxy clusters — amounted to “the foundation of our modern understanding of the universe’s history, from the Big Bang to the present day.”

His work set the stage for a “transformation” of cosmology over the last half-century, using theoretical tools and calculations that helped interpret traces from the infancy of the universe, the committee said. Peebles is the Albert Einstein Professor of Science at Princeton.

Mayor and Queloz were credited having “started a revolution in astronomy” notably with the discovery of exoplanet 51 Pegasi B, a gaseous ball comparable with Jupiter, in 1995 — a time when, as Mayor recalled — that “no one knew whether exoplanets existed or not.”

An exoplanet is a planet outside the solar system.

“Prestigious astronomers had been searching for them for years, in vain!” Mayor quipped.

More than 4,000 exoplanets have since been found in the Milky Way since then, and “Strange new worlds are still being discovered, with an incredible wealth of sizes, forms and orbits,” the committee said.

The University of Geneva quoted Mayor and Queloz as saying it was “simply extraordinary” that they won the prize for “the most exciting” discovery of their careers.

The cash prize comes with a gold medal and a diploma that are received at an elegant ceremony in Stockholm on Dec. 10, the anniversary of the death of prize founder Alfred Nobel in 1896, together with five other Nobel winners. The sixth one, the peace prize, is handed out in Oslo, Norway on the same day.

This was the 113th Nobel Prize in Physics awarded since 1901, of which 47 awards have been given to a single laureate. Only three women have been awarded it so far: Marie Curie in 1903, Maria Goeppert-Mayer in 1963 and Donna Strickland in 2018, according to the Nobel website.

On Monday, Americans William G. Kaelin Jr. and Gregg L. Semenza and Britain’s Peter J. Ratcliffe won the Nobel prize for Physiology or Medicine, for discovering details of how the body’s cells sense and react to low oxygen levels, providing a foothold for developing new treatments for anemia, cancer and other diseases.

Nobel, a Swedish industrialist and the inventor of dynamite, decided the physics, chemistry, medicine and literature prizes should be awarded in Stockholm, and the peace prize in Oslo.

The Nobel Prize for Chemistry will be announced Wednesday, two Literature Prizes will be awarded on Thursday, and the Peace Prize comes Friday. This year will see two literature Prizes handed out because the one last year was suspended after a scandal rocked the Swedish Academy.