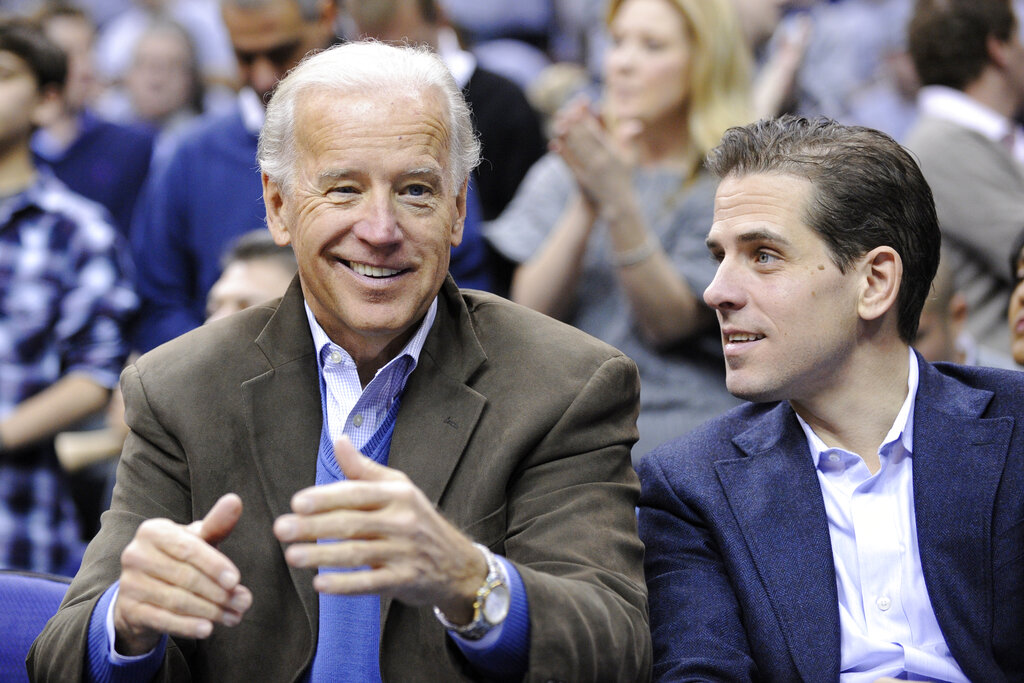 In this Jan. 30, 2010, file photo, Vice President Joe Biden, left, with his son Hunter, right, at the Duke Georgetown NCAA college basketball game in Washington. Since the early days of the United States, leading politicians have had to contend with awkward problems posed by their family members. (AP Photo/Nick Wass, File)

WASHINGTON (AP) — Joe Biden’s son Hunter is rejecting assertions by President Donald Trump and his Republican allies that he did anything wrong in engaging in foreign work in Ukraine and China.

Hunter Biden also says he failed to take into account potential implications for his father’s political career. The former vice president is a front-runner in the 2020 Democratic presidential contest.

In an ABC News interview that aired this morning, Hunter Biden concedes he may have made a mistake “in the grand scheme of things” for failing to see the political repercussions for his father. But he adds, “Did I make a mistake based on some ethical lapse? Absolutely not.”

Hunter Biden also acknowledged that he likely would not have been named to the board of a foreign company if his last name weren’t Biden.

“I don’t think there’s a lot of things that would have happened in my life if my last name wasn’t Biden,” he said.

Trump and Republicans have targeted Hunter Biden for his work in Ukraine and China, making baseless claims of corruption.

In a July 25 phone call, Trump pressured Ukraine’s leader to investigate the Bidens. Hunter Biden was on the board of an energy company in Ukraine. That phone call is the focus of a whistleblower complaint that triggered the formal House impeachment inquiry into Trump.

Hunter Biden said he never discussed his business dealings with his father.

His interview aired hours before the former vice president and other Democratic presidential candidates were set to appear at their fourth debate tonight night at Otterbein University in Westerville, Ohio.

Hunter Biden, who recently said he would step down from the board of directors of a Chinese-backed private equity firm, blamed his father’s political opponents for creating a firestorm over his work.

“I gave a hook to some very unethical people to act in illegal ways to try to do some harm to my father. That’s where I made the mistake,” he said. “So I take full responsibility for that. Did I do anything improper? No, not in any way. Not in any way whatsoever.”

He added: “What I regret is not taking into account that there would be a Rudy Giuliani” — Trump’s personal lawyer — “and a president of the United States that would be listening to this ridiculous conspiracy idea.”

Trump has denied doing anything wrong and has defended his phone call with Ukraine’s president, calling it “perfect” and “beautiful.”