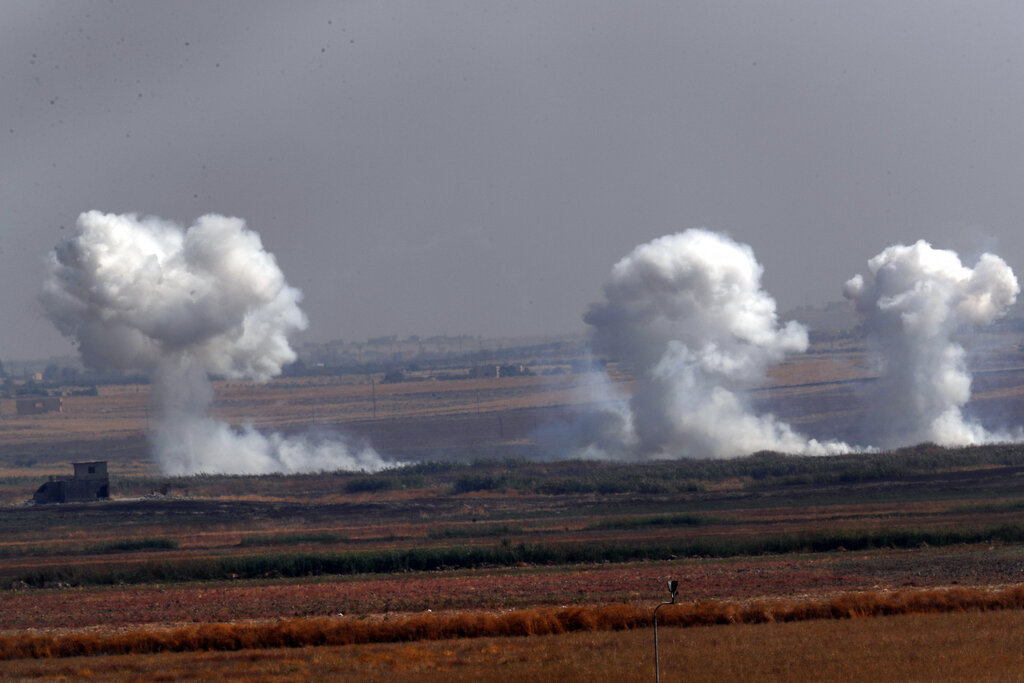 In this photo taken today from the Turkish side of the border between Turkey and Syria, in Akcakale, Sanliurfa province, southeastern Turkey, smoke billows from targets inside Syria during bombardment by Turkish forces. (AP Photo/Lefteris Pitarakis)

AKCAKALE, Turkey (AP) — Turkish ground forces seized at least one village from Kurdish fighters in northern Syria as they pressed ahead with their assault today, launching airstrikes and unleashing artillery shelling on towns and villages the length of its border.

The Turkish invasion, now in its second day, has been widely condemned around the world. In northern Syria, residents of border areas scrambled in panic as they tried to get out on foot, in cars and with rickshaws piled with mattresses and a few belongings.

It was wrenchingly familiar for the many who only a few years ago had fled the advances on their towns and villages by the Islamic State group.

A Kurdish news agency and a war monitor say Turkish troops have bombarded a convoy of vehicles taking residents of the northern city of Raqqa to a border town, inflicting casualties among them.

The Kurdish Hawar news agency said the attack today on the road leading to the border town of Tal Abyad killed three people and wounded several others.

The Britain-based Syrian Observatory for Human Rights said the Turkish airstrike occurred when a convoy carrying a tribal leader reached the entrance of Tal Abyad. It said several people were wounded but that no one was killed.

Such contradictions in casualties’ figures are common in the aftermath of attacks.

Turkish troops have been bombarding the town of Tal Abyad since the start of their ground offensive against Kurdish fighters on Wednesday.

A Kurdish-led group and Syrian activists claimed today that despite the heavy barrage, Turkish troops had not made much progress on several fronts they had opened over the past hours. But their claims could not be independently verified and the situation on the ground was difficult to assess.

Turkish President Recep Tayyip Erdogan claimed that 109 “terrorists” were killed since Ankara launched the offensive into Syria the previous day — a reference to the U.S.-allied Syrian Kurdish fighters. He did not elaborate, and the reports on the ground did not indicate anything remotely close to such a large number of casualties.

Erdogan also warned the European Union not to call Ankara’s incursion into Syria an “invasion,” and renewed his threat of “opening the gates” and letting Syrian refugees flood Europe.

Turkey’s state-run news agency said Turkey-allied Syrian opposition fighters cleared two villages across the border in Syria, Yabisa and Tel Fander, and entered them. It did not provide further details.

Maj. Youssef Hammoud, a spokesman for the Turkish-backed Syrian fighters, tweeted that they were in Yabisa, near the town of Tal Abyad, describing it as “the first village to win freedom.”

Turkey began its offensive in northern Syria on Wednesday with airstrikes and artillery shelling, and then ground troops began crossing the border later in the day.

U.S. troops pulled back from the area, paving the way for Turkey’s assault.

Turkey has long threatened to attack the Kurdish fighters whom Ankara considers terrorists allied with a Kurdish insurgency in Turkey. Expectations of an invasion increased after President Donald Trump’s abrupt decision Sunday to essentially abandon the Syrian Kurdish fighters, leaving them vulnerable to a Turkish offensive.

The Kurds, who have been America’s only allies in Syria fighting the Islamic State group, stopped today all their operations against the IS extremists in order to focus on fighting advancing Turkish troops, Kurdish and U.S. officials said.

Turkey considers its operations against the Kurdish militia in Syria a matter of its own survival and has long insisted it won’t tolerate a local Kurdish administration in Syria along its border. It says Kurdish fighters there are linked to its outlawed Kurdistan Workers’ Party, or PKK, which has led an insurgency against Turkey for 35 years, killing tens of thousands.

Turkey’s PKK is considered a terror group by Turkey and its Western allies, including the United States. Ankara has been infuriated by U.S. support for the Syrian Kurdish fighters, claiming that Washington was arming an extension of a terror group — charges both the U.S. and the Syrian Kurds deny.

The Turkish Defense Ministry statement today did not provide further details on the offensive but shared a brief video of commandos in action. The ministry said Turkish jets and artillery had struck 181 targets east of the Euphrates River in Syria since the incursion started.

“No advance as of now,” he tweeted today.

The Observatory, a war monitor that has activists throughout the country, said that since Turkey began its operation, seven civilians have been killed.

Turkey says it intends to create a “safe zone” that would push the Kurdish militia away from its border and eventually allow the repatriation of up to 2 million Syrian refugees in the area.

Trump’s decision to have American troops step aside in northeastern Syria was a major shift in U.S. policy and drew opposition from all sides at home. It also marked a stark change in rhetoric by Trump, who during a press conference in New York last year vowed to stand by the Kurds, who have been America’s only allies in Syria fighting IS.

Trump said at the time that the Kurds “fought with us” and “died with us,” and insisted that America would never forget.

After Erdogan announced the offensive, Trump called the operation “a bad idea.” Later Wednesday, he said he didn’t want to be involved in “endless, senseless wars.”

Turkey’s campaign — in which a NATO member rained down bombs on an area where hundreds of U.S. troops had been stationed — drew immediate criticism and calls for restraint from Europe.

Australia today expressed concerns the Turkish incursion could galvanize a resurgence of the Islamic State group and refused to endorse the close ally U.S. for pulling back its troops from the area. Prime Minister Scott Morrison said he had been in contact with the Turkish and U.S. governments overnight and admitted to being worried about the situation.

In Washington, officials said Wednesday that two British militants believed to be part of an Islamic State cell that beheaded hostages had been moved out of a detention center in Syria and were in U.S. custody.

The two, El Shafee Elsheikh and Alexanda Amon Kotey, along with other British jihadis allegedly made up the IS cell nicknamed “The Beatles” by surviving captives because of their English accents. In 2014 and 2015, the militants held more than 20 Western hostages in Syria and tortured many of them.

The group beheaded seven American, British and Japanese journalists and aid workers and a group of Syrian soldiers, boasting of the butchery in videos released to the world.