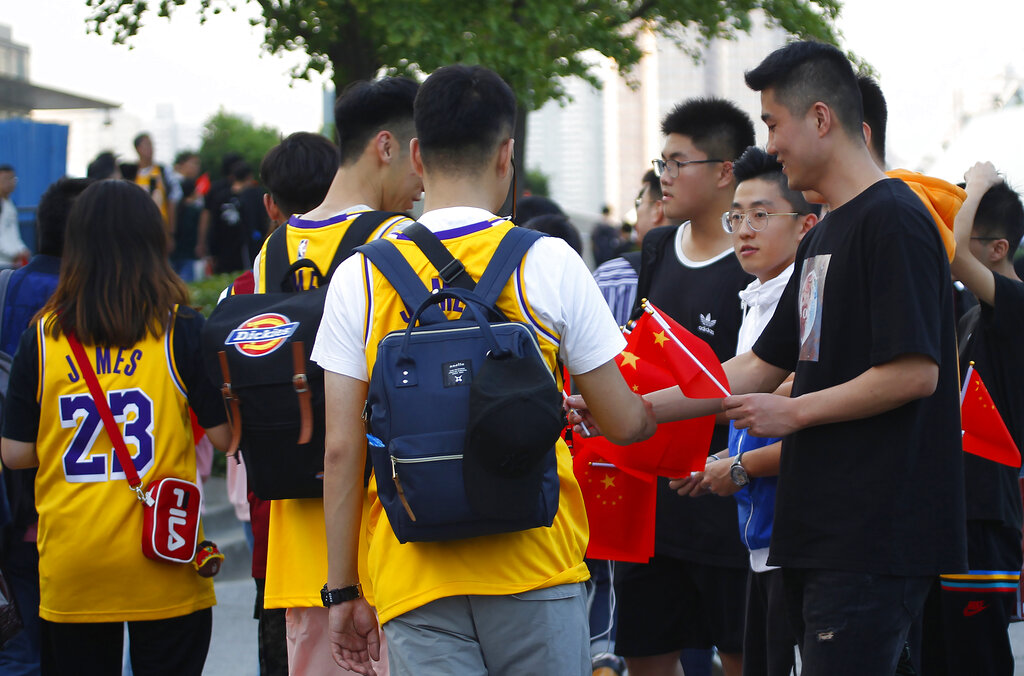 Fans hand out Chinese national flags to others arriving for the NBA preseason game to be held today at the Mercedes Benz Arena in Shanghai, China. All media events such as news conferences have been canceled inside the arena hosting Thursday's NBA preseason game in China between the Los Angeles Lakers and Brooklyn Nets, though the matchup itself remains on as scheduled. (AP Photo) /// DQo=

SHANGHAI, China (AP) — In response to the NBA defending Daryl Morey’s freedom of speech, Chinese Officials took it away from the Los Angeles Lakers and Brooklyn Nets.

All of the usual media sessions surrounding the Lakers-Nets preseason game in Shanghai today — including a scheduled news conference from NBA Commissioner Adam Silver and postgame news conferences with the teams — have been canceled. It’s the latest salvo in the rift between the league and China stemming from a since-deleted tweet posted last week by Morey, the general manager of the Houston Rockets.

“There will be no media availabilities for tonight’s game between the Brooklyn Nets and Los Angeles Lakers,” the NBA said in a statement today, released a few hours before the game.

The game was held as scheduled, with Lakers forward LeBron James and Nets guard Kyrie Irving getting loud ovations when they were introduced as starters. But neither national anthem was played before the game, and no players addressed the crowd before tip-off in a departure from tradition before such international games. Fans arriving at the arena to watch — many of them donning NBA jerseys — were handed small Chinese flags to carry with them inside, and at least one person carried a sign critical of Silver.

“I understand that there are consequences from that exercise of, in essence, his freedom of speech,” Silver said at a news conference in Tokyo earlier this week. “We will have to live with those consequences.”

And this move was one of those consequences.

Most seats were filled, and fans reacted as they would normally — oohs and aahs for good plays, applause for baskets, the loudest cheers coming whenever James touched the ball. Some fans may be upset with the NBA, but they still seem to have their favorite players.

“If we have to choose, we will choose to support our country,” said fan Ma Shipeng, who brought 900 flags to hand out to fellow fans. “We only like some particular basketball players, but we don’t like NBA anymore. I give away Chinese flags tonight, as I hope people to put the national interest in front of following NBA. I will continue to support James. But none of our Chinese people would accept what Morey and Silver said.”

Morey’s tweet expressed support for anti-government protesters in Hong Kong, and sparked fallout that has completely overshadowed the NBA’s annual trip to China — which typically takes on a celebratory tone.

Not this year. Most events in advance of the game, such as NBA Cares events to benefit educational causes and the Special Olympics, were called off, as was a “fan night” where Lakers and Nets players were to interact directly with some Chinese ticketholders. Signage in Shanghai to promote the game — huge photos of James, Anthony Davis, Irving and other players — was ripped down, and mentions of the game were scrubbed from the arena website.

All that comes as many Chinese corporations suspended their business ties to the NBA. Chinese state broadcaster CCTV said it was not going to show the Lakers-Nets games today or in Shenzhen on Saturday, and NBA broadcast partner Tencent also said it was changing its coverage plans for the league.

Silver said earlier this week that Rockets great Yao Ming, a Basketball Hall of Famer and now the president of the Chinese Basketball Association — which has also suspended its ties with Houston as part of the Morey tweet fallout — is angry as well.

“I’m not sure he quite accepts sort of how we are operating our business right now, and again, I accept that we have a difference of opinion,” Silver said. “I also think that as part of our core values, tolerance is one of those as well. I think tolerance for differing societies’ approaches, tolerance for differing points of view and the ability to listen. Certainly I don’t come here, either as the commissioner of the NBA or as an American, to tell others how they should run their governments.”

In the U.S., there was governmental reaction as well leading up to the game.

On Wednesday in Washington, a bipartisan group of lawmakers — including the rare alignment of Republican Sen. Ted Cruz of Texas and Democratic Rep. Alexandria Ocasio-Cortez of New York — sent a letter to Silver saying the NBA should show the “courage and integrity” to stand up to the Chinese government. They asked the NBA to, among other things, suspend activities in China until what they called the selective treatment against the Rockets ends.

“You have more power to take a stand than most of the Chinese government’s targets and should have the courage and integrity to use it,” the lawmakers told Silver.

The Rockets were extremely popular in China, largely because of Yao. But the team’s merchandise has been taken off e-commerce sites and out of stores selling NBA apparel in the country, murals featuring the team’s stars and logo were painted over and even the Chinese consulate office in Houston expressed major displeasure with Morey and the Rockets.

Morey has been silent on the matter since a tweet Sunday where he attempted to make some sort of amends with the Chinese.

“I have always appreciated the significant support our Chinese fans and sponsors have provided and I would hope that those who are upset will know that offending or misunderstanding them was not my intention,” he wrote Sunday. “My tweets are my own and in no way represent the Rockets or the NBA.”

Saturday’s game between the Lakers and Nets in Shenzhen also remains on as scheduled.