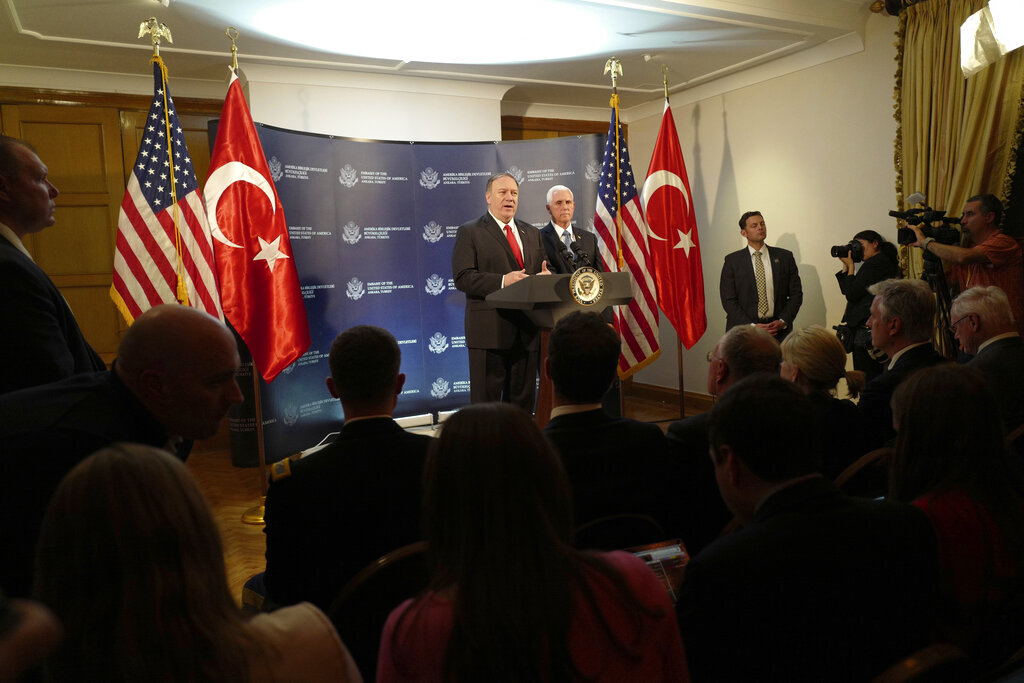 U.S. Secretary of State Mike Pompeo speaks as Vice President Mike Pence listens during a news conference Thursday at the U.S. ambassador's residence in Ankara, Turkey. The U.S. and Turkey agreed to a five-day cease-fire in the Turks' attacks on Kurdish fighters in northern Syria to allow the Kurds to withdraw to roughly 20 miles away from the Turkish border. (AP Photo/Burhan Ozbilici) (AP Photo/Burhan Ozbilici)

JERUSALEM (AP) — U.S. Secretary of State Mike Pompeo met with Israel’s prime minister today to reaffirm the countries’ close ties at a time when many in Israel fear the Trump administration intends to cut and run from the Middle East.

The meeting came a day after a U.S. delegation led by Vice President Mike Pence and Pompeo reached an agreement with Turkey to halt its week-old offensive against Kurdish forces in northern Syria. Turkey invaded after the U.S. moved its troops aside, abandoning the Syrian Kurdish fighters America had partnered with against the Islamic State group. Turkey views the Kurdish fighters as terrorists because of their links to an insurgency inside its borders.

Israel has strongly condemned the offensive, with Prime Minister Benjamin Netanyahu warning of “ethnic cleansing.” Others have expressed fear that President Donald Trump’s stated desire to get out of “stupid endless wars” in the Middle East makes him an unreliable ally as Israel faces threats from Iran.

In brief remarks after their meeting, Pompeo said “the remarkable, close relationship between our two countries is as strong as it has ever been.” He said they discussed ways to push back against Iran, and “efforts to jointly combat all the challenges that the world confronts here in the Middle East.”

Netanyahu thanked America for its “consistent support” and said they discussed ways of making the alliance “even stronger.”

When asked about the agreement to halt the fighting in northern Syria, Netanyahu said “we hope things will turn out for the best,” without elaborating. Pompeo declined to comment.

Later, Pompeo met with officials from the Simon Wiesenthal Center, which works to combat anti-Semitism worldwide. The center said its representatives had shared with Pompeo the “fears of millions of Americans over the plight of the Kurdish minority in Syria.” They said Pompeo assured them the United States was not abandoning the Middle East.

Netanyahu has portrayed his close relationship with Trump as a godsend for Israel, pointing to the American president’s decisions to withdraw from the Iranian nuclear deal and to recognize Jerusalem as Israel’s capital.

But Israelis have expressed alarm over a series of recent decisions, culminating in the Syria pullout, that they fear portend an American withdrawal from the region. Trump’s expressed willingness to open negotiations with Iran, which nearly resulted in talks with President Hassan Rouhani, raised fears that the U.S. would back away from tough sanctions on the Islamic republic. Trump’s refusal so far to retaliate for an attack on Saudi oil facilities, which the U.S. blamed on Iran , sparked further concern.

“Trump abandons allies without blinking and Israel is liable to be next,” the popular Yediot Ahronot newspaper said in an article earlier this week. “The entire balance of power in the Middle East is built on a very delicate web of supports, pressures, understandings and agreements–and Trump is unraveling that web.”

Rapid advances by Turkish forces this week forced the Kurds to turn to Syrian President Bashar Assad for protection, and Syrian and Russian forces have already fanned out across the vast swathes of northeastern Syria held by the Kurds. That could allow Iran, a close ally of Assad, to further expand its presence, which already stretches across the Middle East to Israel’s northern frontier.

The questions about the U.S. alliance come at a sensitive time for Netanyahu, who made his relations with Trump and other top world leaders a major plank of his campaign ahead of last month’s elections. The vote left him deadlocked with his main opponent, with no clear path for either to form a government.

On Wednesday, a Yediot Ahronot columnist accused Netanyahu of placing all his eggs in “Trump’s basket,” saying the American president has become a “flimsy crutch.”