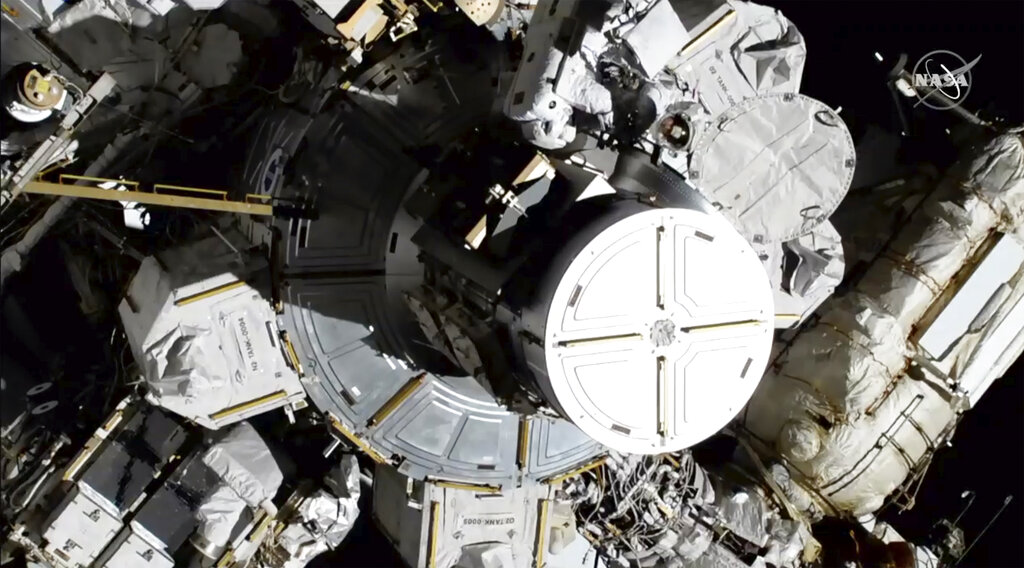 In this photo provided by NASA astronauts Christina Koch and Jessica Meir exits the International Space Station this morning. The world’s first female spacewalking team is making history high above Earth. This is the first time in a half-century of spacewalking that a woman floated out without a male crewmate. Their job is to fix a broken part of the station’s solar power network.(NASA via AP)

CAPE CANAVERAL, Fla. (AP) — The world’s first female spacewalking team made history high above Earth this morning, floating out of the International Space Station to fix a broken part of the power network.

As NASA astronauts Christina Koch and Jessica Meir emerged one by one, it marked the first time in a half-century of spacewalking that a woman floated out without a male crewmate. The spacewalk is scheduled to last until around 1:30 p.m.

America’s first female spacewalker from 35 years ago, Kathy Sullivan, was delighted. She said It’s good to finally have enough women in the astronaut corps and trained for spacewalking for this to happen.

NASA leaders — along with women and others around the world — cheered Koch and Meir on. At the same time, many noted that this will hopefully become routine in the future.

“We’ve got qualified women running the control, running space centers, commanding the station, commanding spaceships and doing spacewalks,” Sullivan told The Associated Press earlier this week. “And golly, gee whiz, every now and then there’s more than one woman in the same place.”

Tracy Caldwell Dyson, a three-time spacewalker who watched from Mission Control, added: “Hopefully, this will now be considered normal.”

“We have the right people doing the right job at the right time,” he said. “They are an inspiration to people all over the world including me. And we’re very excited to get this mission underway.”

NASA originally wanted to conduct an all-female spacewalk last spring, but did not have enough medium-size suits ready to go. Koch and Meir were supposed to install more new batteries in a spacewalk next week, but had to venture out three days earlier to deal with an equipment failure that occurred over the weekend. They need to replace an old battery charger for one of the three new batteries that was installed last week by Koch and Andrew Morgan.

“Jessica and Christina, we are so proud of you. You’re going to do great today,” Morgan radioed from inside as the women exited the hatch.

Meir, making her spacewalking debut, became the 228th person in the world to conduct a spacewalk and the 15th woman.

It was the fourth spacewalk for Koch, who is seven months into an 11-month mission that will be the longest ever by a woman.