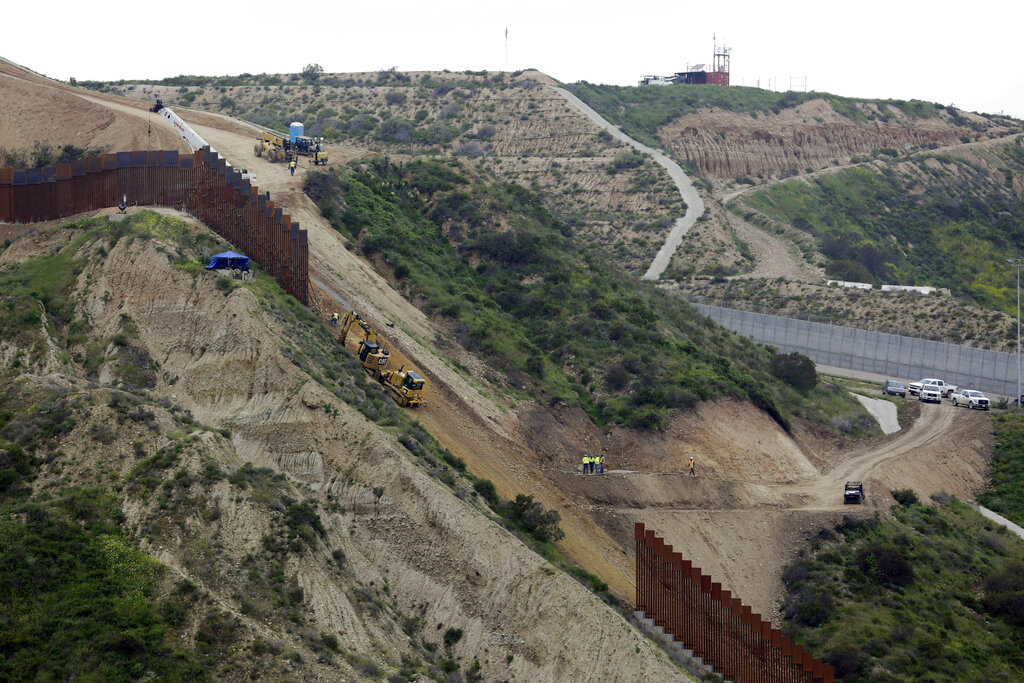 In this March 11 file photo, construction crews replace a section of the primary wall separating San Diego, above right, and Tijuana, Mexico, below left, seen from Tijuana, Mexico. Defense Secretary Mark Esper has approved the use of $3.6 billion in funding from military construction projects to build 175 miles of President Donald Trump’s wall along the Mexican border. (AP Photo/Gregory Bull, File)

WASHINGTON (AP) — Defense Secretary Mark Esper approved the use of $3.6 billion in funding from military construction projects to build 175 miles of President Donald Trump’s wall along the Mexican border.

Esper’s decision Tuesday fuels what has been a persistent controversy between the Trump administration and Congress over immigration policies and the funding of the border wall. And it sets up a difficult debate for lawmakers who refused earlier this year to approve nearly $6 billion for the wall but now must decide if they will refund the projects that are being used to provide the money.

Elaine McCusker, the Pentagon comptroller, said the now-unfunded projects are not being canceled. Instead, the Pentagon is saying the military projects are being “deferred.” The Defense Department, however, has no guarantee from Congress that any of the money will be replaced, and a number of lawmakers made it clear during the debate earlier this year that they would not fall for budget trickery and sleight of hand to build the wall.

“It is a slap in the face to the members of the Armed Forces who serve our country that President Trump is willing to cannibalize already allocated military funding to boost his own ego and for a wall he promised Mexico would pay to build,” said Senate Democratic Leader Chuck Schumer of New York. He said the funding shift will affect the U.S. Military Academy at West Point.

Congress approved $1.375 billion for wall construction in this year’s budget, same as the previous year and far less than the $5.7 billion that the White House sought. Trump grudgingly accepted the money to end a 35-day government shutdown in February but simultaneously declared a national emergency to take money from other government accounts, identifying up to $8.1 billion for wall construction.

The Pentagon reviewed the list of military projects and said none that provided housing or critical infrastructure for troops would be affected, in the wake of recent scandals over poor living quarters for service members in several parts of the country. Defense officials also said they would focus on projects set to begin in 2020 and beyond, with the hope that the money could eventually be restored by Congress.

“Canceling military construction projects at home and abroad will undermine our national security and the quality of life and morale of our troops, making America less secure,” said House Speaker Nancy Pelosi, a California Democrat.

The government will spend the military housing money on 11 wall projects in California, Arizona and Texas, the administration said in a filing Tuesday in a lawsuit brought by the American Civil Liberties Union. The most expensive is for 52 miles in Laredo, Texas, at a cost of $1.27 billion.

The Laredo project and one in El Centro, California, are on private property, which would require purchase or confiscation, according to the court filing. Two projects in Arizona are on land overseen by the Navy and will be the first to be built, no earlier than Oct. 3. Seven are at least partly on federal land overseen by the Interior Department.

The 175 miles covered by the Pentagon funding represents just a small fraction of the 1,954-mile U.S.-Mexico border.

Army Lt. Gen. Andrew W. Poppas, director of operations for the Joint Staff, told reporters that shoring up the wall could eventually lead to a reduction in the number of troops who are deployed along the border. About 3,000 active-duty troops and 2,000 members of the National Guard are being used along the border to support Homeland Security and border patrol efforts. About 1,200 of the active-duty troops are conducting surveillance in mobile truck units.

Pappas and other officials couldn’t say how soon or by how many the troop numbers could go down. Pentagon spokesman Jonathan Hoffman said the troops would remain at the border for as long as they are needed. It could depend in part on the number of attempted border crossings by migrants and other issues.