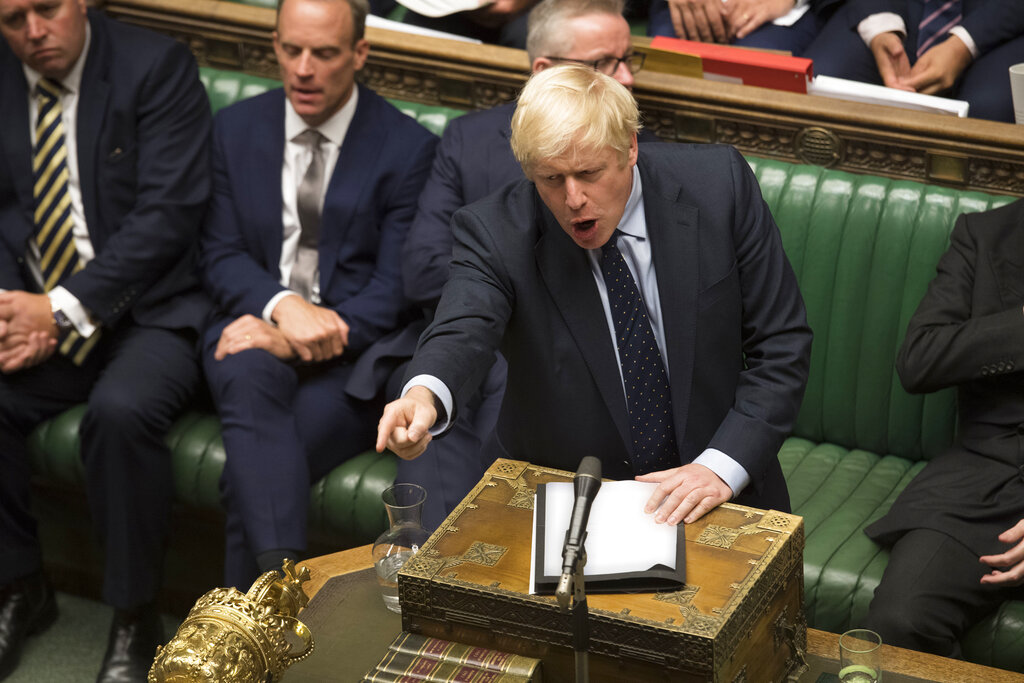 LONDON (AP) — Britain’s Parliament was attempting to defy Prime Minister Boris Johnson’s Brexit plans today as lawmakers sought a way out of the impasse that has gripped the nation since the 2016 vote to leave the European Union.

The House of Commons was set to confront Johnson over his insistence that the U.K. leave the EU on Oct. 31 even without a withdrawal agreement to cushion the economic blow. Opposition lawmakers, supported by rebels in Johnson’s Conservative Party, planned to fast-track a law that would block a no-deal departure, amid cries from lawmakers that it would cause irreparable harm.

“To deliver Brexit like this is to create a poison pill which for 40 years will divide this country straight down the middle,” former Conservative Party leadership candidate Rory Stewart told the BBC. “If you are going to deliver Brexit at all, try to do it legally, constitutionally and with consent.”

Johnson accused his opponents of undermining the government’s attempt to strike a new divorce deal with the EU, and said he would seek a general election if the lawmakers succeed this week, taking his message directly to the people in his bid to deliver Brexit come what may.

Today Johnson said the opposition’s “surrender bill” would “wreck any chance” of Britain concluding successful negotiations with the EU.

He said that if the bill passed he would call for “a general election on October 15.”

But it is unclear whether Johnson has the votes to trigger an election, which needs the approval of two-thirds of the 650 House of Commons lawmakers.

The main opposition Labour Party said it would oppose an election until legislation is in place to block a no-deal Brexit. The party’s spokesman on Brexit issues, Keir Starmer, said Johnson had violated the trust of the House of Commons with his decision last week to suspend Parliament for several weeks before the Brexit deadline.

Johnson needs the support of Labour to win Parliament’s backing for an election.

“He has zero trust, because I’m afraid he has been dishonest time and again,” Starmer told the BBC.

While Johnson insists that talks with the EU are “making substantial progress,” the bloc says the U.K. has not submitted any substantial new proposals.

“These negotiations are a sham. All he is doing is running down the clock,” Corbyn told lawmakers in the House of Commons.

On Tuesday, Johnson lost his first vote in Parliament since becoming prime minister in July, as lawmakers passed a motion enabling their push for a law stopping a no-deal Brexit. His government lost its working majority as one Conservative lawmaker defected to the opposition, and more than 20 Tory legislators sided with the opposition on the no-deal vote.

Johnson responded with swift vengeance, expelling the rebels from the Tory group in Parliament, leaving them as independent lawmakers. Among those bounced out were Stewart; Nicholas Soames, the grandson of Winston Churchill; and Kenneth Clarke, a former treasury chief and the longest-serving member of the House of Commons.

The beleaguered U.K. leader received a boost today when a Scottish court refused to intervene in his decision to suspend Parliament. A Scottish judge ruled that it was a matter for lawmakers to decide, rather than the courts.

The case was only the first of several challenges to Johnson’s maneuver, however.

Transparency campaigner Gina Miller, who won a ruling in the Supreme Court in 2017 that stopped the government from triggering the countdown to Brexit without a vote in Parliament, has another legal challenge in the works — set to be heard Thursday. A human rights campaigner has sued in Northern Ireland, arguing that the historic Good Friday accord that brought peace is in jeopardy because of Johnson’s actions.