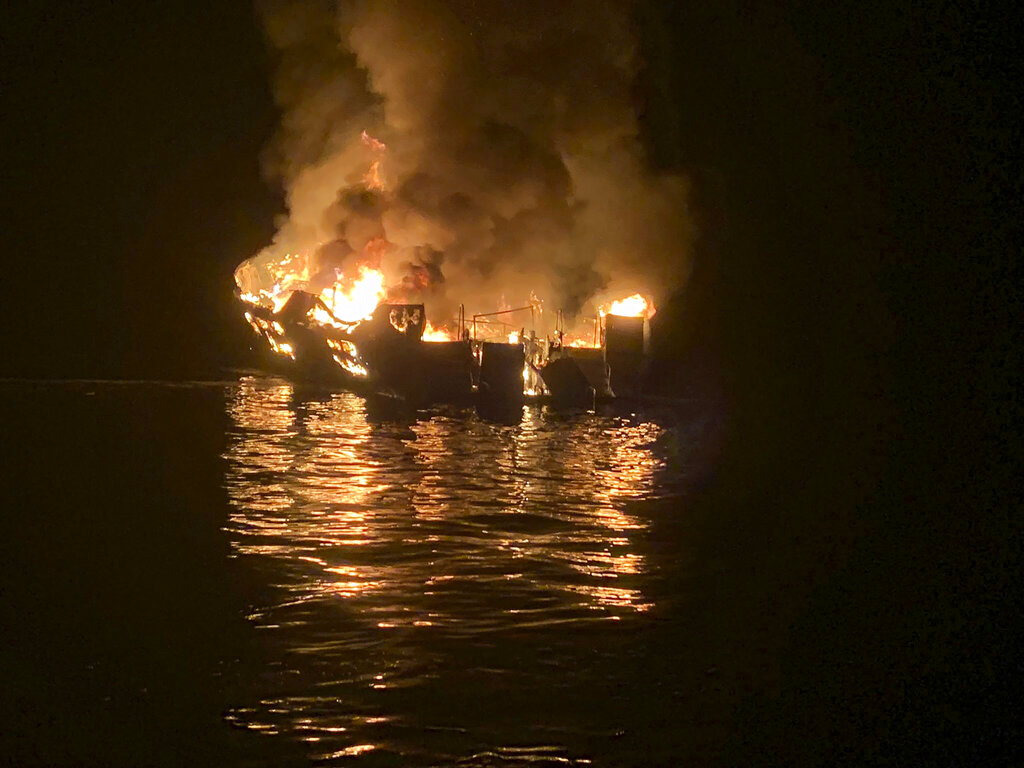 SANTA BARBARA, Calif. (AP) — When the mayday call came in, authorities in Southern California quickly realized they were facing just about the worst firefighting scenario imaginable: A boat fully ablaze far out to sea in the middle of the night with one narrow stairway out for over 30 sleeping passengers.

Coast Guard Lt. Cmdr. Matthew Kroll says at least 25 people on a recreational scuba-diving trip died and the search will continue through the night for the nine others still missing. He says five others have been found but not recovered due to unsafe conditions under the boat, which sank in about 60 feet (18 meters) of water. Kroll that says these numbers are based on initial reports and authorities are awaiting final counts from the autopsies.

Five crew members sleeping on the top deck jumped off and took a dinghy to safety. Two had minor injuries.

Meanwhile, authorities opened a family assistance center where counseling was being provided to relatives of those onboard. None of their names were immediately released.

The missing and dead were among 39 passengers and crew who had departed Santa Barbara’s Channel Islands Harbor on Saturday aboard the boat Conception for a Labor Day weekend scuba-diving trip.

The fire broke out about 3 a.m. as the Conception was anchored off Santa Cruz Island, about 90 miles (145 kilometers) northwest of Los Angeles. The crew appeared to quickly call for help.

“The call was garbled, it was not that clear, but we were able to get some information out of it to send vessels,” said Coast Guard Petty Officer Mark Barney.

Capt. Paul Amaral of the vessel assistance company TowBoatUS also launched a fast boat from Ventura Harbor, but it was some 30 miles away. By the time it got there around 5 a.m. a Coast Guard helicopter and a fireboat were on scene.

Amaral said he first searched the water and shoreline, then turned back to the Conception, which was adrift and going aground. He attached a line and pulled it into deeper water where the fireboats could reach.

“We launched that boat knowing that the vessel was on fire, lots of people aboard,” he told The Associated Press.

The five crew members, meanwhile, had taken their dingy to a private fishing boat, The Grape Escape, that was anchored near the north shore of Santa Cruz Island.

That boat’s owners, Bob and Shirley Hansen, told The New York Times they were asleep when they heard pounding on the side of their 60-foot vessel about 3:30 a.m. and discovered the frightened crew members.

“When we looked out, the other boat was totally engulfed in flames, from stem to stern,” Hansen said. “I could see the fire coming through holes on the side of the boat. There were these explosions every few beats. You can’t prepare yourself for that. It was horrendous.”

Hansen said two of the crew members went back toward the Conception looking for survivors but found no one.

It wasn’t immediately clear when the other bodies that have been found might be retrieved or when divers could search the boat for others.

“It’s upside down in relatively shallow water with receding tides that are moving it around,” Brown said. Investigators have not yet determined a cause for the fire.

The 75-foot Conception was on a three-day excursion to the chain of rugged, wind-swept isles that form Channel Islands National Park in the Pacific Ocean west of Los Angeles. The fire broke out as the boat sat anchored in Platt’s Harbor off Santa Cruz Island.

House passes bill legalizing use of fireworks in Ohio