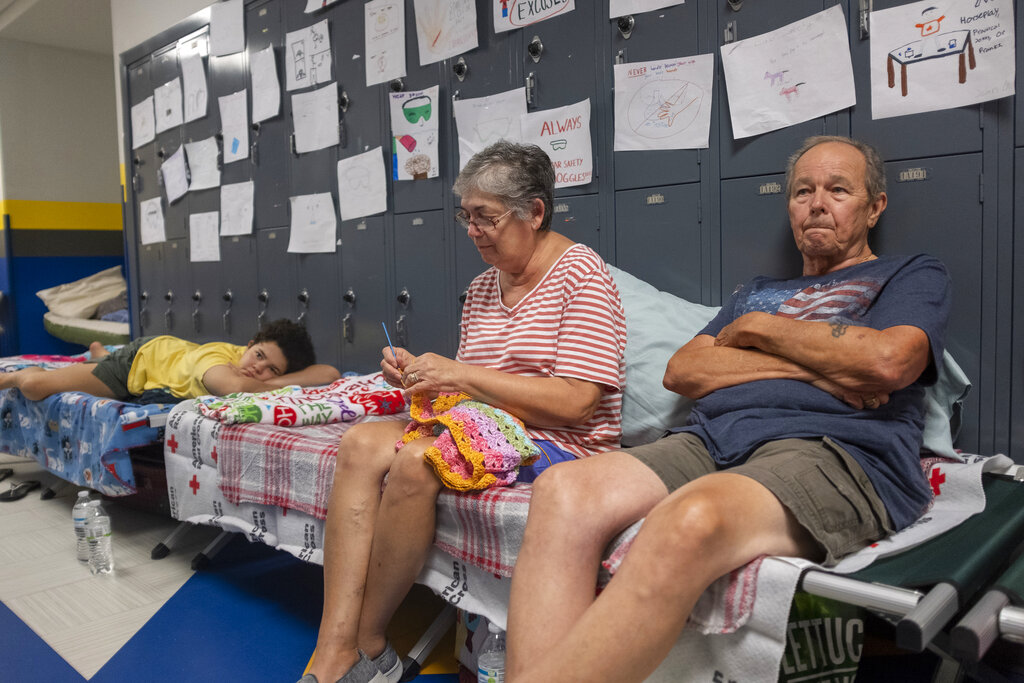 Gordon and Dina Reynolds, with their 11-year-old granddaughter, Abby, sit on cots in the hall way of the North Myrtle Beach High School that is currently being used as a Red Cross evacuation shelter Wednesday in North Myrtle Beach, S.C. Weakened but still deadly, Hurricane Dorian crept up the Southeastern coast of the United States and millions were ordered to evacuate as forecasters said near-record levels of seawater and rain could inundate Georgia and the Carolinas. (Jason Lee/The Sun News via AP)

CHARLESTON, S.C. (AP) — Hurricane Dorian , back to a Category 3 storm, began raking the Southeast U.S. seaboard early today and left tens of thousands without power as it threatened to inundate low-lying coasts from Georgia to Virginia with a life-threatening storm surge after its deadly mauling of the Bahamas.

Dorian squatted over the island nation as its strongest hurricane on record, leaving widespread devastation and at least 20 people dead. But it weakened substantially in the days since, dropping from a Category 5 to a Category 2 storm before increasing again late Wednesday. Dorian could maintain this intensity for several days before gradually weakening through Saturday, according to the National Hurricane Center.

Duke Energy in a news release Wednesday said it expected the storm to cause 700,000 outages in the Carolinas and that it brought in resources from 23 states and Canada to respond “as soon as it was safe to do so.”

More than 1,500 people sought refuge in 28 shelters in South Carolina, where sheets of rain began falling late Wednesday in the historic port city of Charleston, located on a peninsula prone to flooding. As Dorian crept dangerously closer, winds picked up sending rain sheets sideways, thunder boomed in the night sky and power flickered on and off in places.

Dorian remained a force to be reckoned with, its swirling circle of winds and rain wrapped around a large, gaping eye visible on photos taken from space. At 8 a.m. today, the distinct eye of the hurricane churned about 70 miles south-southeast of Charleston, moving north at 8 mph off the coast with dangerously high winds of 115 mph extending about 60 miles outward.

In Charleston’s downtown, stores and restaurants were boarded up with wood and corrugated metal and about 830,000 people were under mandatory evacuation orders on the South Carolina coast. A flood chart posted by the National Weather Service projected a combined high tide and storm surge around Charleston Harbor of 10.3 feet; the record, 12.5 feet, was set by Hugo in 1989.

The Charleston County Emergency Operations Center advised early today that all bridges were a Code Yellow due to 35 mph winds. It said high-profile vehicles such as box trucks and tractor trailers should not travel the bridges and that the public should use extreme caution.

Hundreds of shelter animals from coastal South Carolina arrived in Delaware ahead of the storm. The News Journal of Wilmington reports nearly 200 animals were airlifted early Tuesday from shelters at risk of flooding. About 150 other animals were expected to arrive that night via land transport. WDBJ-TV reports more than 50 animals from North Carolina were shipped to Virginia and may be available for adoption as early as this weekend.

Hundreds of thousands also were ordered off the Georgia coast. Georgia Gov. Brian Kemp said “we are very worried, especially about the barrier islands getting cut off.”

In North Carolina, where authorities said an 85-year-old man died after falling from a ladder while preparing his home for Dorian, Gov. Roy Cooper warned of a coming storm surge and flash flooding from heavy rains. The Outer Banks barrier islands were particularly exposed.

In Florida, initially projected to take a direct hit, there was widespread relief Wednesday after Dorian passed by from a relatively safe distance offshore. Orlando’s international airport reopened, as did Walt Disney World and Universal. But one Florida resident had died while preparing for the storm, a 56-year-old man who was knocked to the ground from a tree Monday evening as he trimmed limbs with a chainsaw in an Orlando suburb.

The Navy ordered ships at its huge base in Norfolk, Virginia, to head to sea for safety, and warplanes at Langley Air Force Base in Hampton, Virginia, were being moved inland. The commander of the Navy Region Mid-Atlantic issued an emergency evacuation order for military personnel and their dependents in five North Carolina counties.

“We are ready to go,” Gaynor said. “We’ll follow Dorian up the coast until it is not a threat.”