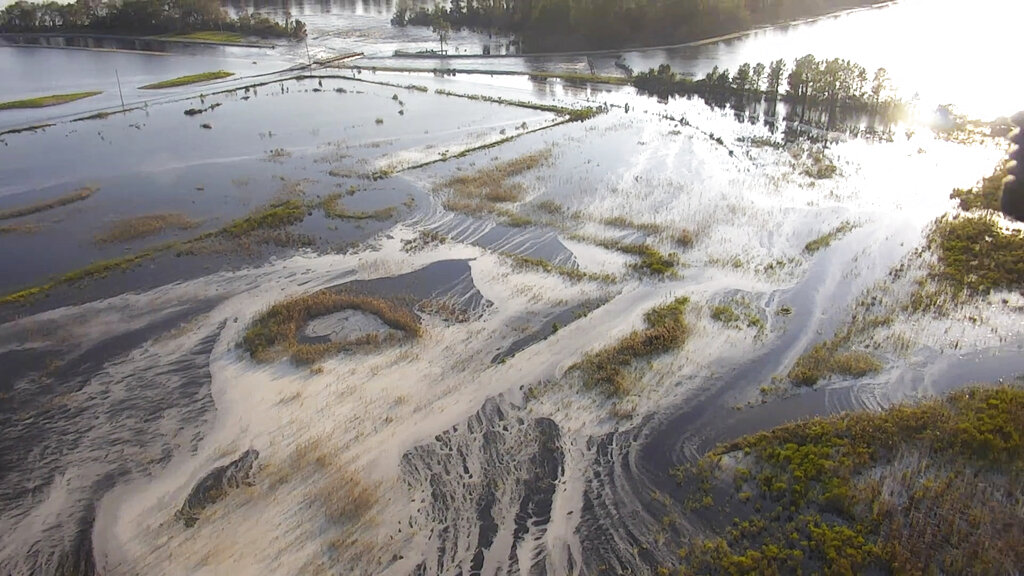 In this file image made from Sept. 21 drone video provided by the N.C. Department of Environmental Quality, light gray material flows out of a flooded coal ash dump toward the Cape Fear River at Duke Energy's L.V. Sutton Power Station near Wilmington, N.C. Duke Energy said Wednesday that it had completed extensive repairs to the dam that breached during Florence at the L.V. Sutton Power Station. (N.C. Department of Environmental Quality via AP, File)

As Hurricane Dorian blows off the coast of the Carolinas, forecasters are predicting high storm surges and drenching rains that could trigger flooding and unleash environmental hazards in areas still recovering from last year’s Hurricane Florence.

The National Weather Service said hurricane warnings were are in effect today for the Carolina coasts up to Virginia, with a “potentially life threatening storm surge” of up to 8 feet around the North Carolina-South Carolina line. Coupled with high tide, the storm’s arrival today is expected to push water up the mouths of coastal rivers, causing low-lying areas to flood. There could also be up to a foot of rainfall across much of Eastern North Carolina, raising concerns of flash flooding well inland.

Some areas in the region expected to be affected by Dorian are still rebuilding from Florence, which caused widespread damage in September 2018 that included scores of flooded hog and chicken farms, inundated sewage treatment plants and breached dam at a power plant near a coal ash landfill.

Dorian’s eye was skirting the coast, potentially making landfall before brushing past Cape Hatteras. It was shaping up to be a more glancing blow than Florence, which slowly moved inland a year ago, dumping record-shattering rains of more than 2 feet in places.

Jen Kendrick, spokeswoman for the N.C. Pork Council, said the members of her organization are well positioned to weather Dorian after a relatively dry summer.

“Farmers in North Carolina have seen about 20 hurricanes in the past two decades and have learned much about preparation and readiness,” Kendrick said.

Those preparations include relocating animals from flood-prone farms, stocking up on livestock feed in case roads are flooded and filling up the fuel tanks for the generators used to keep pumps going in the event of power outages.

Duke Energy said Wednesday that it had completed extensive repairs to the dam that breached during Florence at the L.V. Sutton Power Station near Wilmington, North Carolina. The company said it had also competed excavation of a large coal ash dump that flooded last year, removing the gray ash containing toxic heavy metals to a landfill on higher ground covered with an artificial turf cap designed to repeal rainwater.

Though part of that landfill is still under construction, Duke spokeswoman Paige Sheehan said they were not expecting any problems from Dorian at the Sutton site.

“We feel very well prepared for this storm,” Sheehan said.

Duke also operates the Brunswick Nuclear Plant near the mouth of the Cape Fear River. The company said it will safely shut down the plant’s twin nuclear reactors at least two hours prior to the arrival of any hurricane force winds.