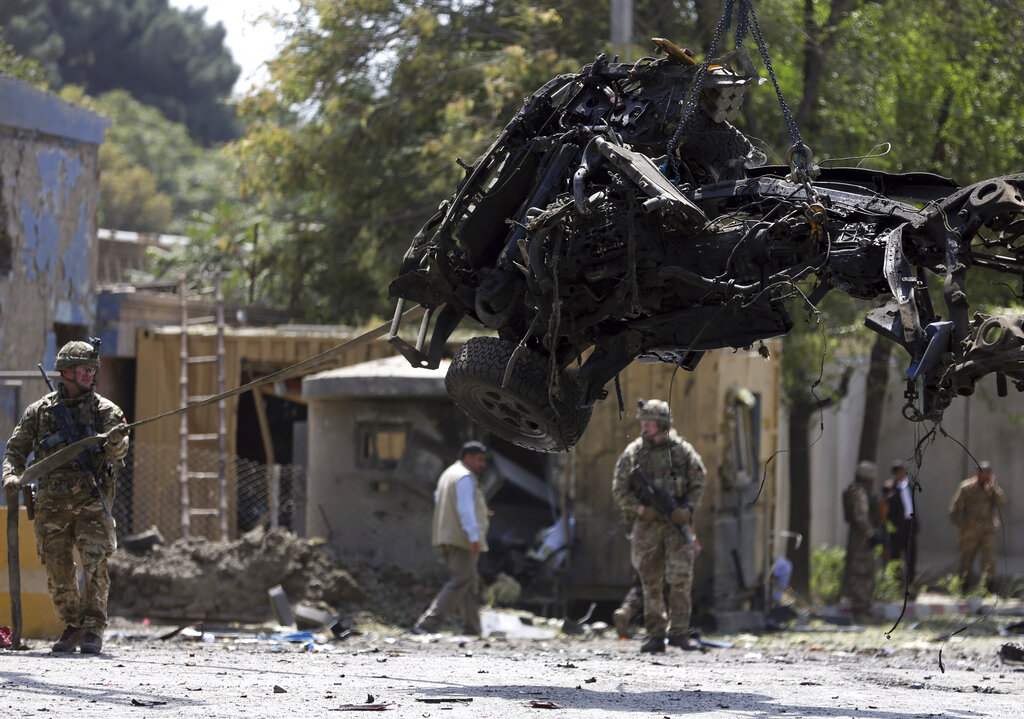 Resolute Support forces remove a damaged vehicle after a car bomb explosion today in Kabul, Afghanistan. A car bomb rocked the Afghan capital today and smoke rose from a part of eastern Kabul near a neighborhood housing the U.S. Embassy, the NATO Resolute Support mission and other diplomatic missions. (AP Photo/Rahmat Gul)

“Peace with a group that is still killing innocent people is meaningless,” Afghan President Ashraf Ghani said in a statement.

A NATO Resolute Support mission statement said the two service members were “killed in action,” without providing details or releasing their names pending notification of their families.

The American soldier was the fourth U.S. service member killed in the past two weeks in Afghanistan.

Interior Ministry spokesman Nasrat Rahimi said another 42 people were wounded and 12 vehicles destroyed. Hours later, the Taliban set off a car bomb outside an Afghan military base in a neighboring province, killing four civilians.

The Taliban said they targeted vehicles of “foreigners” as they tried to enter the heavily guarded Shashdarak area in Kabul where Afghan national security authorities have offices. The NATO Resolute Support mission is nearby, and British soldiers were at the scene, retrieving what appeared to be the remains of a NATO vehicle.

Footage widely shared on social media showed the suicide bomber’s vehicle turning into the checkpoint and exploding — and a passer-by trying to sprint away just seconds before. “We all saw on security camera who were targeted!” presidential spokesman Sediq Seddiqi tweeted.

Once again, stunned civilians made up most of the victims.

“I don’t know who brought us to the hospital and how,” said one of the wounded, Nezamuddin Khan, who was knocked unconscious and woke up in a local hospital.

The explosion at the checkpoint, which has been targeted in the past, follows a Taliban attack against a foreign compound late Monday that killed at least 16 people and wounded more than 100, almost all of them local civilians. An Associated Press reporter on the phone with the U.S. Embassy when today’s blast occurred heard sirens begin blaring there.

Hours later, the Taliban claimed responsibility for a car bombing outside an Afghan military base in the Logar provincial capital, Puli Alam, which houses members of the Afghan special forces. Provincial council chief Haseebullah Stanekzai said a small number of international forces also had been in the area. Governor Anwar Khan Es-Haqzai said four civilians were killed and four others wounded.

U.S. envoy Zalmay Khalilzad has been in Kabul this week briefing Ghani and other Afghan leaders on the U.S.-Taliban deal to end nearly 18 years of fighting that he says only needs President Donald Trump’s approval to become a reality. Khalilzad has not commented publicly on this week’s attacks.

The Afghan government has raised serious concerns about the deal, including in new comments today as the latest attack occurred. The agreement was moving with “excessive speed,” presidential adviser Waheed Omer told reporters, warning of difficult days ahead.

“Afghans have been bitten by this snake before,” Omer said, recalling past agreements from which, like now, the Afghan government has been sidelined. “Where there is no feeling of ownership there is no safety,” he said.

The Taliban, at their strongest since their 2001 defeat by a U.S.-led invasion, have refused to negotiate with the government, calling it a U.S. puppet.