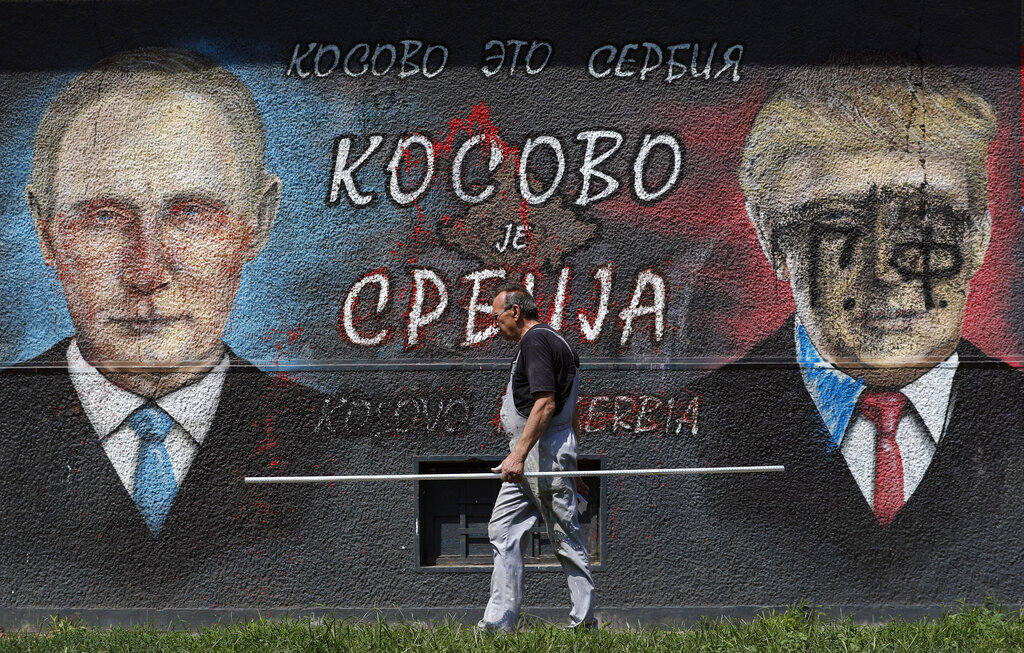 A man passes by graffiti depicting the Russian President Vladimir Putin, left, and US President Donald Trump in Belgrade, Serbia. The Cyrillic letters on graffiti read "Kosovo is Serbia". A former Serbian province, Kosovo declared independence in 2008, a move that Belgrade does not recognize. Talks between the two that are being mediated by the European Union, stalled last year over Kosovo's decision to impose a 100 percent tax on goods from Serbia. (AP Photo/Darko Vojinovic)

Britain, France, Germany, Italy and the U.S. said in a joint statement that they “stand united in our aim to see the full normalization of relations between Kosovo and Serbia via a comprehensive, politically sustainable, and legally binding agreement that contributes to regional stability.”

A former Serbian province, Kosovo declared independence in 2008, a move that Belgrade and its ally Russia do not recognize. The U.S. and over 100 countries recognize Kosovo’s statehood following a NATO intervention in 1999 that stopped a Serbian crackdown against Kosovo Albanian separatists.

Talks between the two stalled last year over Kosovo’s decision to impose a 100 percent tax on goods from Serbia.

The statement urged Kosovo to lift the tariffs, but also asked Serbia to suspend “the de-recognition campaign against Kosovo.” Serbia has recently stepped up efforts — mostly among developing African countries — to suspend recognition of Kosovo’s statehood.

“The status quo prevents progress on Kosovo’s and Serbia’s path toward the European Union and is simply not sustainable,” the statement said, adding “We stand ready to assist in any way possible.”