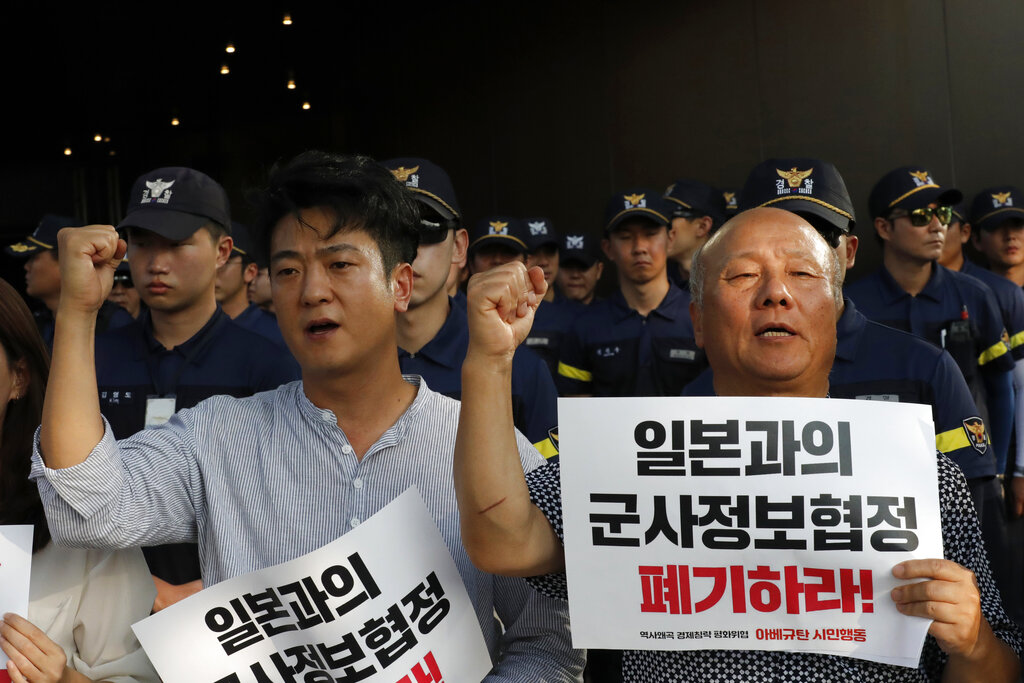 SEOUL, South Korea (AP) — South Korea will stop exchanging classified intelligence on North Korea with Japan amid a bitter trade dispute, an official said today, a surprise announcement that is likely to set back U.S. efforts to bolster security cooperation with two of its most important allies in the Asian region.

South Korea’s decision to cancel the intelligence-sharing pact will also further aggravate its ties with Japan, which are already at their lowest point since the two countries established diplomatic ties in 1965. Japanese media said Tokyo will lodge a protest with Seoul and quoted unidentified Tokyo officials as calling the South Korean move “extremely regrettable” and “unbelievable.”

Many experts had predicted that South Korea would be unlikely to spike the 3-year-old intelligence-sharing deal for the sake of its relations with the United States. South Korea has been seeking U.S. help in resolving the trade dispute, and Seoul and Washington have also been working together to restart stalled talks on stripping North Korea of its nuclear weapons.

“Under this situation, the government has determined that maintaining the agreement, which was signed for the purpose of exchanging sensitive military intelligence on security, does not serve our national interests,” Kim You-geun, the deputy director of South Korea’s presidential national security office, said in a nationally televised statement.

He said South Korea will formally notify Japan of its decision before Saturday, the deadline for an extension of the pact for another year.

South Korea accuses Japan of weaponizing trade to punish it over a separate dispute linked to Japan’s brutal colonial rule of the Korean Peninsula from 1910 to 1945. Japan denies that, saying its steps were taken because of unspecified security concerns.