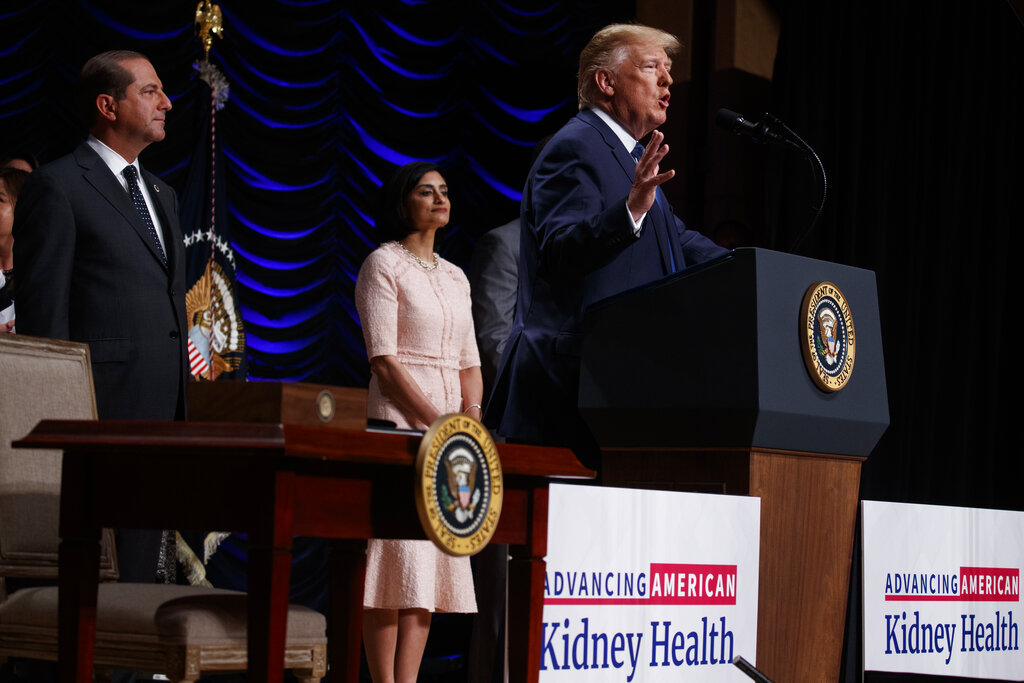 Secretary of Health and Human Services Alex Azar and administrator of the Centers for Medicare and Medicaid Services Seema Verma look on as President Donald Trump speaks during an event Wednesday on kidney health at the Ronald Reagan Building and International Trade Center in Washington. Today, the president will hold a social media summit, followed by a news conference about his quest to add a citizenship question to the national census. (AP Photo/Evan Vucci)

WASHINGTON (AP) — President Donald Trump said he’ll hold a news conference late this afternoon to talk about the 2020 census and his push to include a question on citizenship.

A Supreme Court ruling has temporarily barred the question, but Trump has said he may issue an executive order or memorandum to try to force the issue.

The government has already begun the process of printing the census survey without that question .

The administration’s focus on asking about citizenship for the first time since 1950 reflects the enormous political stakes and potential costs in the once-a-decade population count that determines the allocation of seats in the House of Representatives for the next 10 years and the distribution of some $675 billion in federal spending.

If immigrants are discounted for lack of citizenship, Democrats fear that would redistribute money and political power away from Democratic-led cities where immigrants tend to cluster to whiter, rural areas where Republicans do well.

An executive order would not, by itself, override court rulings blocking the question. But such a move could give administration lawyers a new basis to try to convince federal courts the question could be included.

Meanwhile, the Justice Department said it’s replacing the legal team that has been pursuing Trump’s efforts, putting in place a new team consisting of both career and politically appointed attorneys. A top lawyer in the department’s civil division who had been leading the team told Attorney General William Barr that a number of people who had been litigating the case preferred “not to continue during this new phase,” Barr said.

But this week, two federal judges rejected the Justice Department’s plan to switch up the legal team, saying it can’t replace the team so late in the dispute without satisfactorily explaining why it’s doing so.