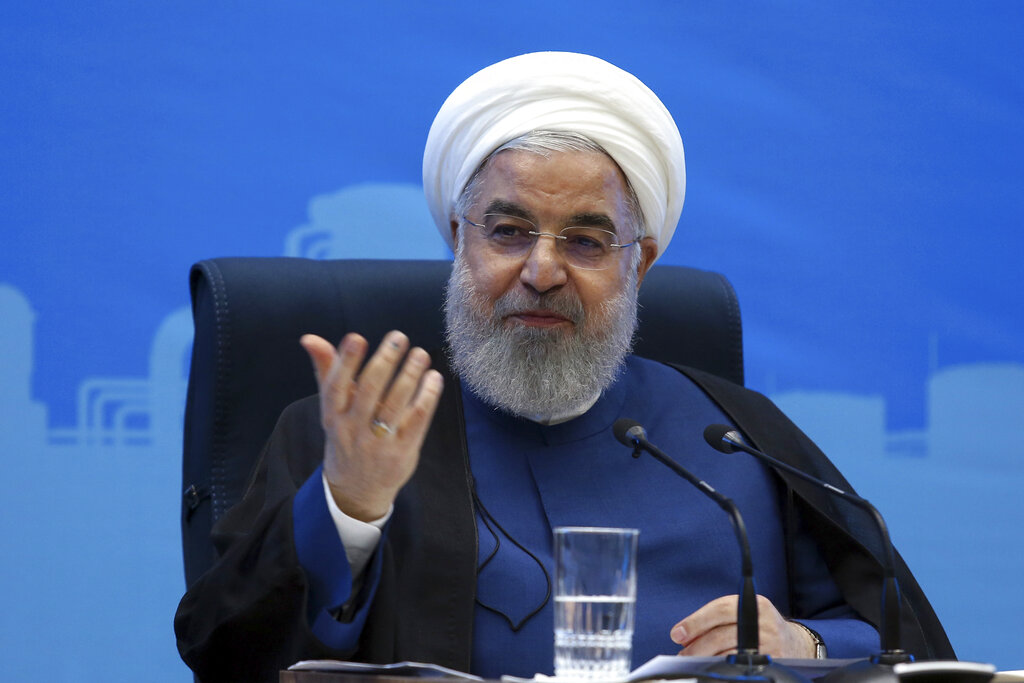 In this photo released by the official website of the office of the Iranian Presidency, President Hassan Rouhani speaks in a meeting Sunday during his provincial tour to the North Khorasan, Iran. Rouhani said his country is ready to negotiate with the United States if Washington lifts its economic sanctions. (Iranian Presidency Office via AP)

The seizure was the latest in a series of dramatic developments as tensions mount between the United States and Iran over the unravelling nuclear deal between Tehran and world powers.

The Panamanian-flagged oil tanker MT Riah stopped transmitting its location early Sunday near Qeshm Island, which has a Revolutionary Guard base on it, according to data listed on tracking site Maritime Traffic.

Iran’s state television did not identify the seized vessel or nationalities of the crew, but said it was intercepted on Sunday. It said the oil tanker had 12 foreign crew members on board and was involved in smuggling some 1 million liters (264,000 gallons) of fuel from Iranian smugglers to foreign customers.

The report said the oil tanker was intercepted south of Iran’s Larak Island in the Strait of Hormuz. Larak is a smaller island just southeast of the larger Qeshm Island.

Crude prices, which had been falling since last week, ticked higher almost immediately after reports of the incident.

The seizure of the ship does not immediately appear to directly target any one particular country and shows the Revolutionary Guard cracking down on illegal smuggling of Iranian oil.

If the MT Riah was indeed the ship seized, the move directly singles out UAE-bound and based vessels. The 58-meter (190-foot) Riah typically made trips from Dubai and Sharjah on the UAE’s west coast before going through the strait and heading to Fujairah on the UAE’s east coast.

The UAE has been calling for a de-escalation of tensions between the U.S. and Iran in past weeks, but has also lobbied for tougher U.S. policies on Iran and supports the maximum pressure campaign of sanctions imposed by the Trump administration since the U.S. unilaterally pulled out of Iran’s nuclear deal with world powers.

The ship’s seizure comes after a tense, but brief standoff last week between the British navy and Iran’s Revolutionary Guard in the Strait of Hormuz, the narrow mouth of the Persian Gulf through which a fifth of all crude oil passes. The British government said a navy frigate had to warn away the paramilitary vessels from disrupting the passage of a British oil tanker through the strait.

It also comes after British marines helped seize an Iranian supertanker off Gibraltar, a British overseas territory at the southern tip of Spain. Britain has since said it would facilitate the release of the tanker if Iran can provide guarantees the vessel would not breach European Union sanctions on shipments to Syria.

Iran has recently increased uranium production and enrichment over the limits of its 2015 nuclear deal, trying to put more pressure on Europe to offer it better terms and allow it to sell its crude oil abroad.

The U.S. has sent thousands of additional troops, B-52 bombers and advanced fighter jets to the region amid the heightened tensions. Iran also shot down a U.S. surveillance drone, raising fears of a wider conflict.

In May, two Emirati oil tankers were among four tankers attacked in acts of sabotage that the U.S. has blamed on Iran. The UAE has stopped short of blaming any country for the attacks off its coast of Fujairah and maintains that diplomacy is the way forward.

Last month saw two other attacks on oil vessels. Iran denies involvement in any of the vessel attacks.

A U.S. defense official had told The Associated Press earlier this week that America had suspicions that Iran had seized the MT Riah when its tracker was turned off in the Strait of Hormuz. An Emirati official had told the AP the small oil tanker made no distress call before switching off its tracker.

Iran’s acknowledgement that a vessel has been seized by the Revolutionary Guard appears to contradict statements by Iran’s Foreign Ministry spokesman on Wednesday saying Iran had aided a foreign oil tanker with a malfunction.

The ship’s registered owner, Dubai-based Prime Tankers LLC, told the AP earlier this week it had sold the ship to another company called Mouj Al-Bahar. A man who answered a telephone number registered to the firm told the AP it didn’t own any ships.

Man gets five years on drugs and other charges