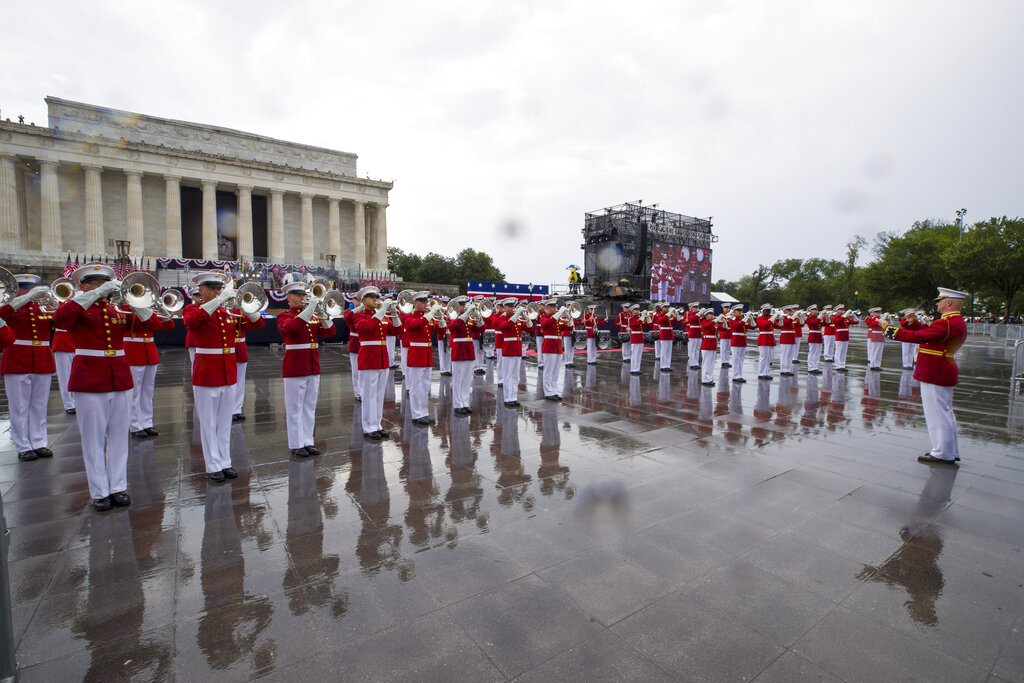 The U.S. Marine Corps Drum and Bugle Corps performs in the rain today during an Independence Day celebration in front of the Lincoln Memorial, Thursday in Washington. (AP Photo/Alex Brandon)

WASHINGTON (AP) — In a sweltering capital threatened by storms, the traditional Fourth of July parade today served as a warm-up act to a distinctly nontraditional evening event at the Lincoln Memorial, where President Donald Trump planned to command the stage against the backdrop of a show of military muscle.

According to a speech he plans to deliver at 6:30 p.m. at the Lincoln Memorial, Trump says the “future of American Freedom” lies with the men and women who are willing to defend it, as it did when America was founded.

“There will be nothing that America cannot do” as long as Americans remember the nation’s history and “never stop fighting for a better future,” he says.

Protesters unimpressed by his “Salute to America” program inflated a roly-poly balloon depicting Trump as an angry, diaper-clad baby.

By adding his own, one-hour production to festivities that typically draw hundreds of thousands anyway, Trump set himself up to be the first president in nearly seven decades to address a crowd at the National Mall on Independence Day. “I will speak on behalf of our great Country!” he said in a morning tweet. “Perhaps even Air Force One will do a low & loud sprint over the crowd.”

An afternoon downpour drenched the Independence Day crowds and presaged an evening of possible on-and-off storms, raising some suspense about whether Trump’s program of military flyovers and the capital’s annual July 4 fireworks — scheduled for 9 p.m. — would be interrupted. The rain chased off a steady stream of people while others arrived, using plastic bags and chairs and covers of baby strollers for shelter.

Trump set aside a historic piece of real estate — a stretch of the Mall from the Lincoln Monument to the midpoint of the reflecting pool — for a mix of invited military members, Republican and Trump campaign donors and other bigwigs. It’s where Martin Luther King Jr. gave his “I have a dream” speech, Barack Obama and Trump held inaugural concerts and protesters swarmed into the water when supporters of Richard Nixon put on a July 4, 1970, celebration, with the president sending taped remarks from California.

Aides to the crowd-obsessed Trump fretted about the prospect of empty seats at his event, said a person familiar with the planning who was not authorized to be identified. Aides scrambled in recent days to distribute tickets and mobilize the Trump and GOP social media accounts to encourage participation for an event hastily arranged and surrounded with confusion.

In the shadow of the Washington Monument, the anti-war organization Codepink erected a 20-foot tall “Trump baby” balloon to protest what it called the president’s co-opting of Independence Day.

“We think that he is making this about himself and it’s really a campaign rally,” said Medea Benjamin, the organization’s co-director. “We think that he’s a big baby. … He’s erratic, he’s prone to tantrums, he doesn’t understand the consequences of his actions. And so this is a great symbol of how we feel about our president.”

The balloon remained tied down at the Mall because park officials restricted the group’s permission to move it or fill it with helium, Benjamin said.

Protesters also handed out small Trump-baby balloons on sticks. Molly King of La Porte, Indiana, a 13-year-old Trump supporter in sunglasses and a “Make America Great Again” hat, happily came away with one.

“They’re making a big stink about it but it’s actually pretty cute,” she said. “I mean, why not love your president as you’d love a baby?”

A small crowd gathered to take pictures with the big balloon, which drew Trump supporters and detractors.

“Even though everybody has different opinions,” said Kevin Malton, a Trump supporter from Middlesboro, Kentucky, “everybody’s getting along.”

But Daniela Guray, a 19-year-old from Chicago who held a “Dump Trump” sign, said she was subjected to a racial epithet while walking along the Constitution Avenue parade route and told to go home.

She said she did not come to the Mall to protest but ended up doing so. “I started seeing all the tanks with all the protests and that’s when I said, àWait, this is not an actual Fourth of July,'” she said. “Trump is making it his day rather than the Fourth of July.”

Weather permitting, Trump planned showcase flyovers by warplanes, aircraft in the presidential Air Force One and Marine One fleet and the Navy Blue Angels aerobatics team, as well as make his remarks. A larger than usual fireworks display was assembled.

Trump had sounded a defensive note Wednesday, tweeting that the cost “will be very little compared to what it is worth.”

“We own the planes, we have the pilots, the airport is right next door (Andrews), all we need is the fuel,” he said, referring to Maryland’s Joint Base Andrews, home for some of the planes expected for the holiday flyover. “We own the tanks and all. Fireworks are donated by two of the greats.”

Trump glossed over the expense of shipping tanks and fighting vehicles to Washington by rail and guarding them for several days, and other costs.

Not since 1951, when President Harry Truman spoke before a large gathering on the Washington Monument grounds to mark the 175th anniversary of the signing of the Declaration of Independence, has a commander in chief made an Independence Day speech to a sizable crowd on the Mall.

One of the Democrats running for president said “this business of diverting money and military assets to use them as a kind of prop, to prop up a presidential ego, is not reflecting well on our country.” Pete Buttigieg, the mayor of South Bend, Indiana, is a Navy Reserve veteran who served in Afghanistan in 2014.

Some of the Republican president’s supporters welcomed his stamp on the holiday.

Rachel McKenna of McKinney, Texas, said her relatives have served in the military and she thought it was important to say “‘We love you guys, we appreciate everything you do,’ and I love the fact I can see that,” as she pointed to the Bradley fighting vehicle positioned near the Lincoln Memorial. 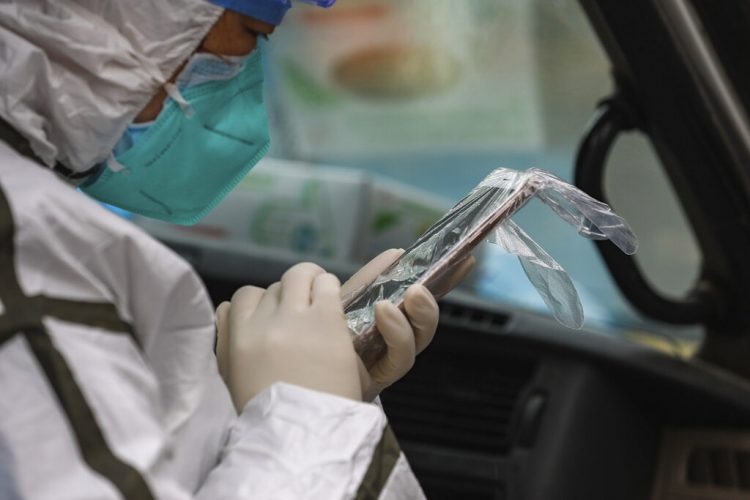 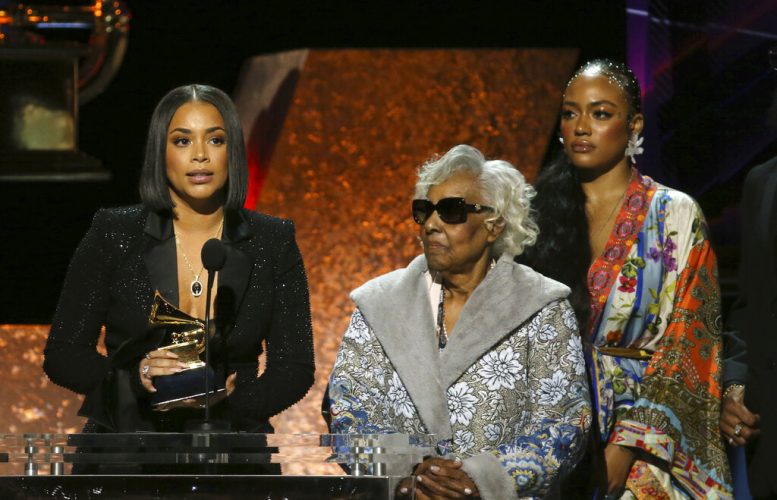 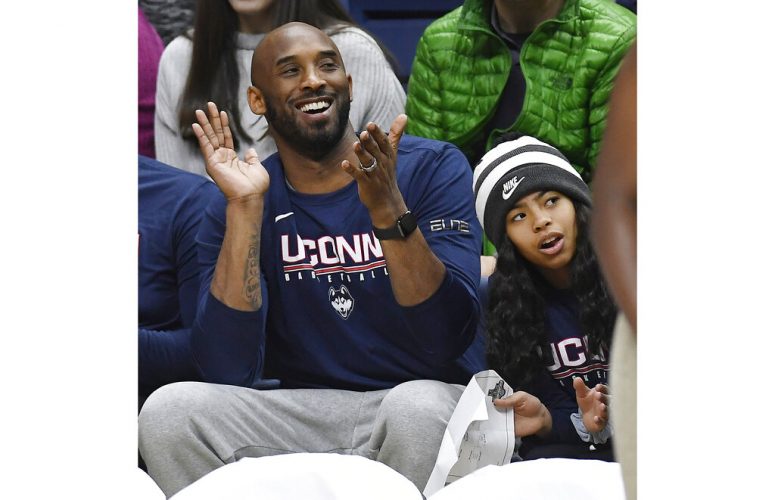