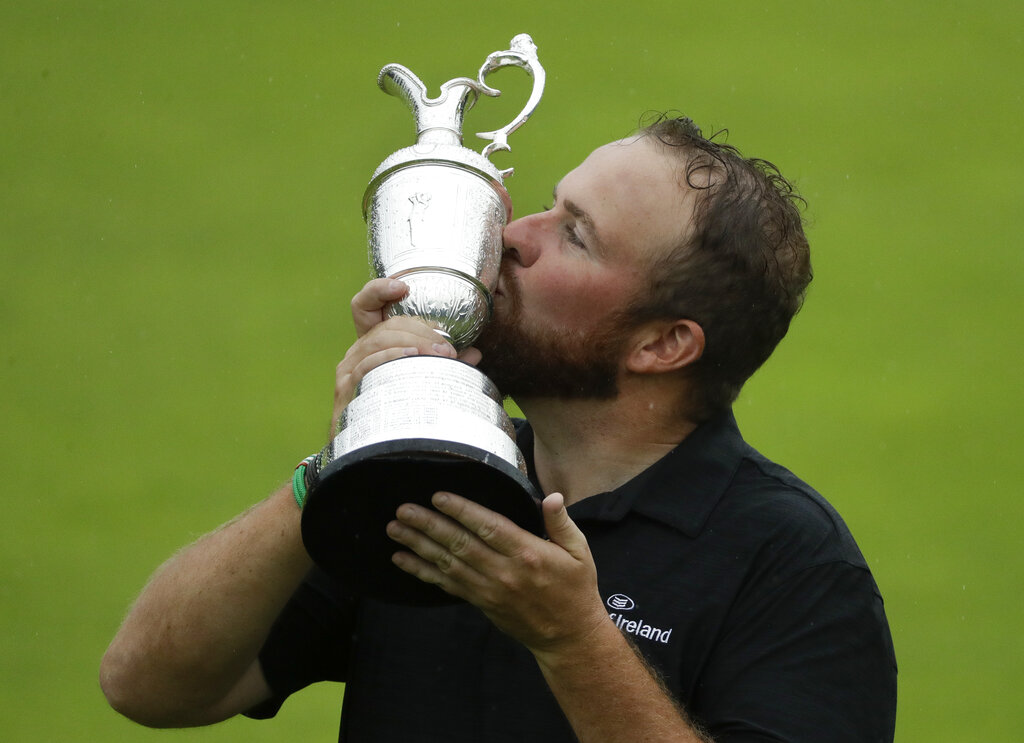 PORTRUSH, Northern Ireland (AP) — The outcome was never in doubt to just about everyone but Shane Lowry.

A year ago, he sat in the parking lot at Carnoustie and cried after missing the cut in the British Open for the fourth straight year. Even with a four-shot lead today at Royal Portrush, in a raging wind and pouring rain, Lowry kept telling his caddie he was nervous and scared, worried that he would ruin a storybook ending to the first Open in Northern Ireland in 68 years.

“I suppose I didn’t even know going out this morning if I was good enough to win a major,” Lowry said. “And look, I’m here now, a major champion. I can’t believe I’m saying it, to be honest.”

The 32-year-old Irishman marks his golf ball with a green shamrock. This had nothing to do with luck.

With stout nerves and a soft touch around the greens, Lowry gave a sellout crowd what they wanted to see. He endured the worst weather of the week, held up under Sunday pressure and expectations of fans who cheered his every step, and won the British Open by six shots.

All he could think about was that walk up the final hole, and it was everything he imagined.

Even as the rain stopped, the tears began flowing.

Lowry closed with a 1-over 72, the first time since 1996 the Open champion was over par in the final round, and it was no less impressive. More difficult than the rain was wind strong enough to break an umbrella. Lowry made four bogeys in the toughest stretch of Royal Portrush without losing ground.

No one from the last 12 groups broke par. No one got closer than three shots of Lowry all day.

“It was Shane’s time, Shane’s tournament,” said Tommy Fleetwood, who closed with a 74 to finish runner-up for the second time in a major.

Thousands of fans who filled these links off the North Atlantic began to celebrate when Lowry rolled in an 8-foot birdie putt on the 15th hole to stretch his lead to six with three holes to play.

His smile got wider with every hole coming in. The cheers got louder.

When his approach to the 18th was just on the fringe, he stretched out his arms and hugged caddie Bo Martin, whom Lowry had leaned on with brutal honesty.

“He was great at keeping me in the moment,” Lowry said. “I kept telling him how nervous I was, how scared I was, how much I didn’t want to mess it up. All I could think about was walking down 18 with a four- or five-shot lead, and lucky I got to do that.”

The loudest roar of a raucous week was for a tap-in par that made Lowry a major champion.

“He’s done brilliantly,” Lee Westwood said after grinding out a 73 to tie for fourth. “All the chasers would have wanted tough conditions and he’s clearly played brilliantly to be on the score he has, under the pressure he’s under.”

Fleetwood, the only player who kept Lowry in range, had chances early to put more pressure on Lowry. He missed a 10-foot birdie putt on the opening hole when Lowry still had work left for bogey. Fleetwood missed a 5-foot par putt on the third and his hopes ended from a bunker and the rough that led to double bogey on the 14th.

Tony Finau shot 71 to finish alone in third, though he was never closer than seven shots. Brooks Koepka, going for his fourth major in the last seven, began the final round seven shots behind and opened with four straight bogeys. He shot 74 and tied for fourth.