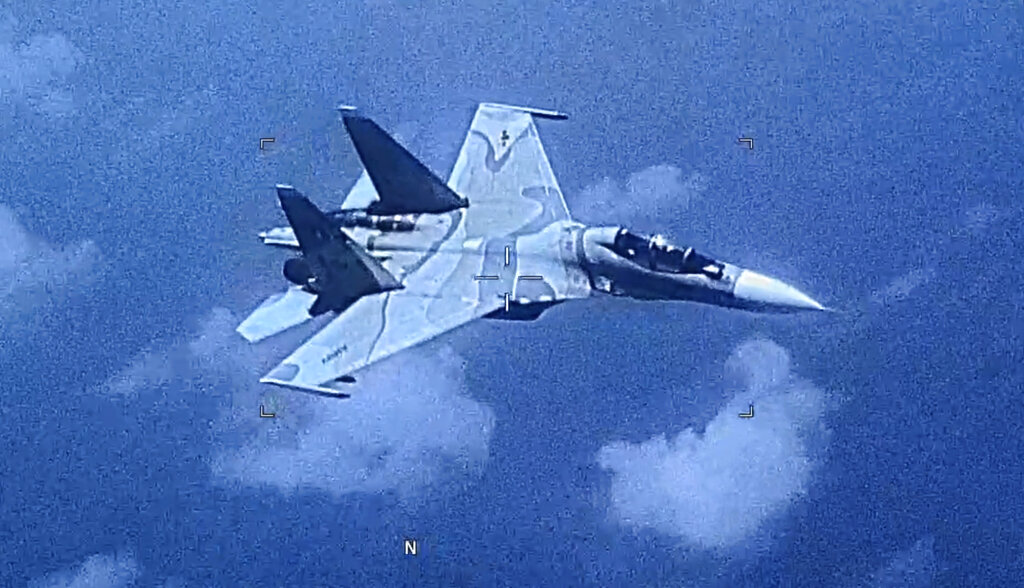 This image made from a Friday provided by the U.S. Southern Command shows a Venezuelan SU-30 fighter jet over the Caribbean. U.S. authorities today said that the Venezuelan fighter jet "aggressively shadowed" an American intelligence plane flying in international airspace over the Caribbean, underscoring rising tensions between the two nations. (U.S. Southern Command/Department of Defense via AP)

U.S. authorities said their EP-3 plane was performing a multi-nationally approved mission on Friday and the Venezuelan SU-30 fighter jet closely trailed the plane, which the U.S. says endangered its crew.

The response by the Venezuelan fighter jet “undermines int’l rule of law & efforts to counter illicit trafficking,” U.S. authorities tweeted, providing video of what they said was the Russian-made jet.

The Trump administration and more than 50 other nations back opposition leader Juan Guaido’s attempt to oust Maduro, whom they accuse of leading the country into a historic crisis. The socialist leader maintains support from countries including Cuba, China and Russia.

Upon identifying the plan as a U.S. electronic intelligence gathering aircraft, the fighter jet escorted it from the region, Venezuelan authorities said, adding that there have been 76 such incidents this year.

“The Armed Forces of Venezuela firmly reject this type of provocation on the part of the United States of America,” Padrino Lopez said in a statement. “We will continually be alert to watching over the tranquility of the Venezuelan people.”

Florida Republican Sen. Marco Rubio, who is a harsh critic of Maduro, issued a warning to Venezuela while tweeting video images of the fighter jet.

“Venezuela only has 3 fighter jets that can fly,” Rubio said on Twitter. “If they ever harmed any U.S. aircraft they would soon have zero.”