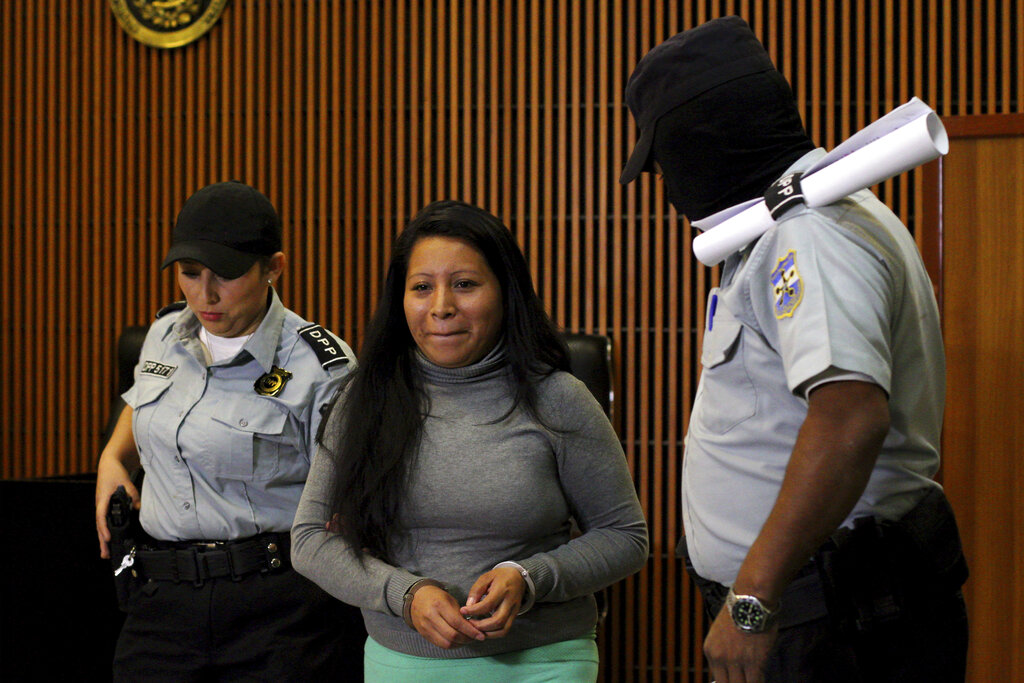 In this Dec. 13, 2017 file photo, Teodora Vasquez, who was found guilty of what the court said was an illegal abortion via a miscarriage, arrives in handcuffs to a courtroom to appeal her 30-year prison sentence, in San Salvador, El Salvador. Another young woman, Evelyn Beatriz Hernandez, faces a second trial for murder today in a case that has drawn international attention because of the country's highly restrictive abortion laws. (AP Photo/Salvador Melendez, File)

SAN SALVADOR, El Salvador (AP) — A young woman who birthed a baby into a toilet in El Salvador faces a second trial for murder today in a case that has drawn international attention because of the country’s highly restrictive abortion laws.

Evelyn Beatriz Hern’ndez had already served 33 months of her 30-year sentence when the Supreme Court overturned the ruling against her in February and ordered a new trial, with a new judge. This is the first retrial of an abortion case in a country that aggressively pursues legal cases against women who have experienced miscarriages and obstetric emergencies, accusing them of murder.

Women’s rights advocates hope the new government of President Nayib Bukele, who took office in June, will soften the country’s stance on women’s reproductive rights — starting with an acquittal for Hern’ndez. Dozens of women have been jailed in El Salvador with similar convictions.

“What Evelyn is living is the nightmare of many women in El Salvador,” said her lawyer, Elizabeth Deras.

Hern’ndez says she had no idea she was pregnant, as a result of a rape. She recalls making her way to an outhouse in a poor, rural community one day in 2016 with strong abdominal pains. She squatted to defecate, she says, and the baby must have slid to the bottom of the septic tank. Evelyn’s mother says she found her daughter passed out next to the makeshift toilet and hailed a pickup truck to transport her to a hospital 30 minutes away.

The fetus was 32 weeks old — nearly full term — and forensic examiners weren’t able to determine whether the death occurred in the womb, or in the feces. The cause of death remains unclear.

Both women insist they didn’t know there was a baby in the septic tank.

Prosecutors don’t believe them, though the Supreme Court accepted defense lawyers’ argument that no proof had been presented that Hern’ndez caused the baby’s death.

The Associated Press only identifies victims of alleged sexual assault by name if the victims themselves go public with the allegations.

The trial of Hern’ndez, 21, was set to begin today in what looks to be the first test for women’s reproductive rights under Bukele, who is young and has expressed disdain for all forms of discrimination.

Bukele has said he believes abortion is only acceptable when the mother’s life is at risk but that he’s “completely against” criminalizing women who have miscarriages.

“If a poor woman has a miscarriage, she’s immediately suspected of having had an abortion,” Bukele said in 2018. “We can’t assume guilt when what a woman needs is immediate assistance.”

Women who turn up at public hospitals following a miscarriage are sometimes accused of having killed the fetus.

Recent public opinion polls in El Salvador show broad support for more lenient abortion laws, such as allowing medical interventions when a mother’s life is in danger or the fetus is not viable. However, many Salvadorans still believe rape victims should be obligated to carry out their pregnancies.