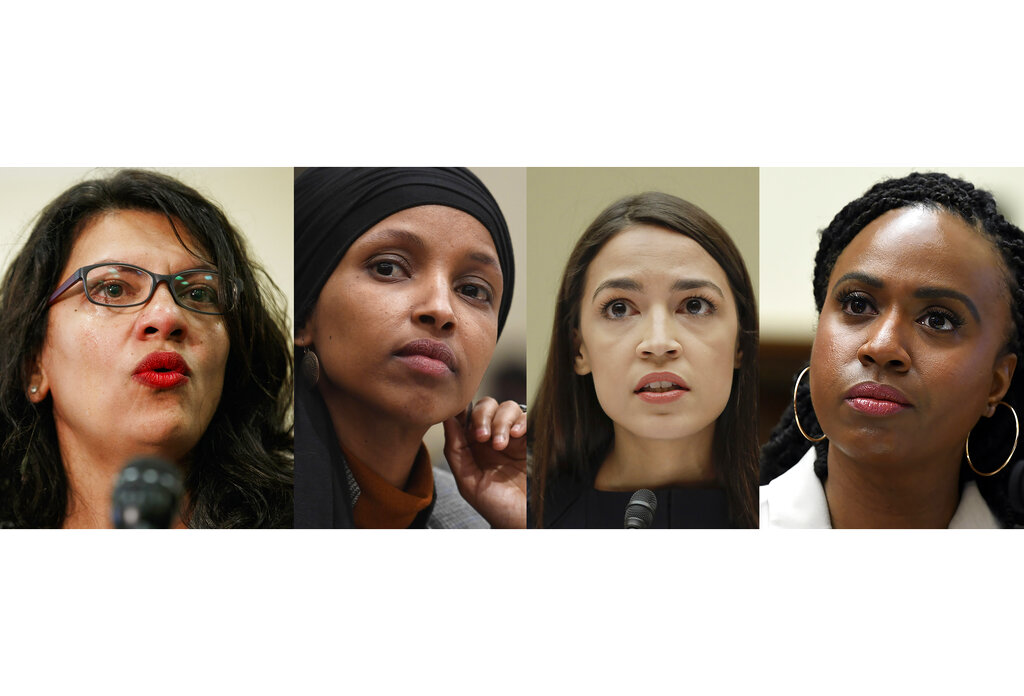 In this combination image are, from left, Rep. Rashida Tlaib, D-Mich., Rep. Ilhan Omar, D-Minn., Rep. Alexandria Ocasio-Cortez, D-NY., and Rep. Ayanna Pressley, D-Mass. In tweets Sunday, President Donald Trump portrays the lawmakers as troublemakers who should go back to their countries of origin and fix problems there. (AP Photo)

WASHINGTON (AP) — President Donald Trump is not apologizing for his weekend tweets that four congresswomen of color should go back to the “broken and crime infested” countries they came from. Instead, Trump tweeted this morning that they ought to apologize to him for past remarks about Israel and about him.

Marc Short, chief of staff to Vice President Mike Pence, said this morning that those tweets were aimed at “very specific” comments made by Reps. Ilhan Omar of Minnesota, who was born in Somalia, and not as a “universal statement.”

He says: “I don’t think that the president’s intent any way is racist.”

All four of the congresswomen are U.S. citizens.

But even as Short spoke, Trump’s new tweets this morning referenced “congresswomen,” not just Omar. He tweeted “When will the Radical Left Congresswomen apologize to our Country, the people of Israel and even to the Office of the President, for the foul language they have used, and the terrible things they have said. So many people are angry at them & their horrible & disgusting actions!”

Omar ignited a bipartisan uproar in Washington several months ago when she suggested that members of Congress support Israel for money. Another congresswoman, Rep. Rashida Tlaib of Michigan, riled up a supportive crowd by calling the president a profanity and predicting that Trump will be removed from office.

In a tweet Sunday night, Trump says it is “so sad” to see Democrats sticking up for the women.

Ocasio-Cortez tweeted in reply, “You are angry that people like us are serving in Congress and fighting against your hate-filled agenda.”