Fri. 8:47 a.m.: US prepped for strikes on Iran before approval was withdrawn 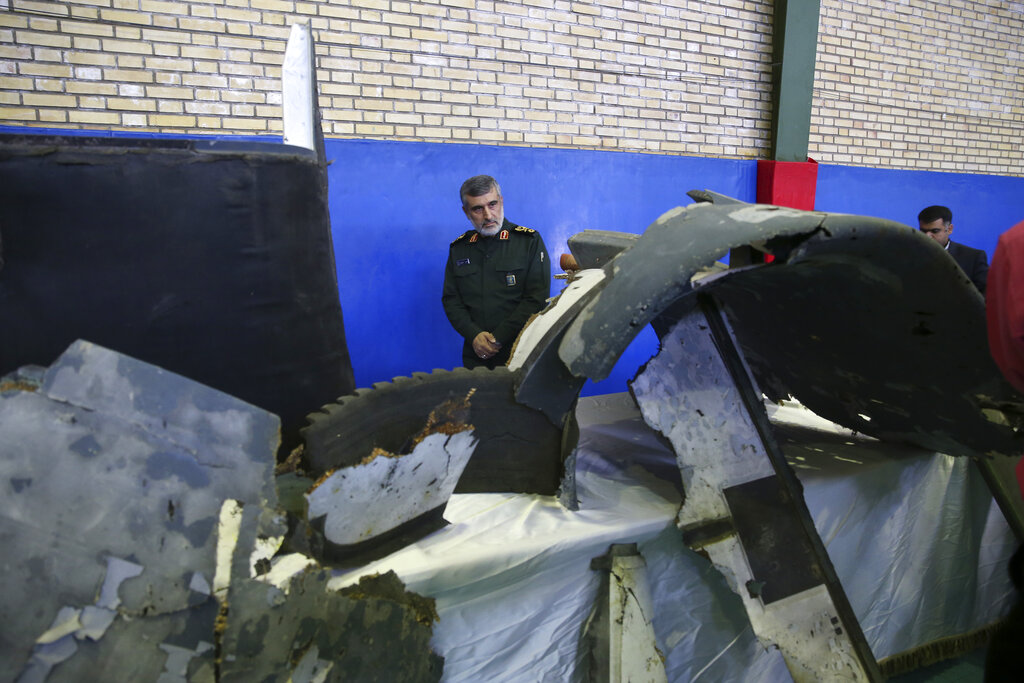 Head of the Revolutionary Guard's aerospace division Gen. Amir Ali Hajizadeh today in Tehran, Iran, looks at debris from what the division describes as the U.S. drone which was shot down on Thursday. Major airlines from around the world began rerouting their flights today to avoid areas around the Strait of Hormuz following Iran's shooting down of a U.S. military surveillance drone there. (Meghdad Madadi/Tasnim News Agency/via AP)

WASHINGTON (AP) — The United States abruptly called off preparations for a military strike against Iran over the downing of a U.S. surveillance drone, a U.S. official said, while Iran claimed this morning it had issued several warnings before shooting down the drone over what it said was Iranian territory.

The Trump administration offered no immediate public account of the thinking behind the last-minute halt in U.S. preparations for retaliation, amid sharply escalating tensions between the two countries . A U.S. official, who was not authorized to discuss the operation publicly and spoke on condition of anonymity, said the targets would have included radars and missile batteries.

The swift reversal was a reminder of the serious risk of military conflict between U.S. and Iranian forces as the Trump administration combines a “maximum pressure” campaign of economic sanctions with a buildup of American forces in the region. As tensions mounted in recent weeks, there have been growing fears that either side could make a dire miscalculation that led to war.

Today, the head of Iran’s Revolutionary Guard’s aerospace division told Iranian state television that Iran had given repeated warnings before launching a missile at the U.S. military surveillance drone.

Gen. Amir Ali Hajizadeh, standing in front of what Iranian authorities described as pieces of the U.S. Navy RQ-4A Global Hawk drone, told state TV that Iranians gave the warnings over radio frequencies that are routinely monitored by drone pilots and the U.S. military. “Unfortunately, they did not answer,” he said.

He added Iran collected the debris from its territorial waters. The U.S. military says that the drone was in international airspace over the Strait of Hormuz when it was shot down.

The New York Times separately reported that President Donald Trump had approved the strikes Thursday night, but then called them off. The newspaper cited anonymous senior administration officials.

According to the U.S. official who spoke to The Associated Press, the strikes were recommended by the Pentagon and were among the options presented to senior administration officials.

It was unclear how far the preparations had gone, but no shots were fired or missiles launched, the official said.

The military operation was called off around 7:30 p.m. Washington time, after Trump had spent most of Thursday discussing Iran strategy with top national security advisers and congressional leaders.

The downing of the U.S. drone — a huge, unmanned aircraft — over the Strait of Hormuz prompted accusations from the U.S. and Iran about who was the aggressor. Iran insisted the drone violated Iranian airspace; Washington said it had been flying over international waters.

Trump’s initial comments on the attack were succinct. He declared in a tweet that “Iran made a very big mistake!” But he also suggested that shooting down the drone — which has a wingspan wider than a Boeing 737 — was a foolish error rather than an intentional escalation, suggesting he may have been looking for some way to avoid a crisis.

“I find it hard to believe it was intentional, if you want to know the truth,” Trump said at the White House. “I think that it could have been somebody who was loose and stupid that did it.”

Trump, who has said he wants to avoid war and negotiate with Iran over its nuclear ambitions, cast the shootdown as “a new wrinkle … a new fly in the ointment.” Yet he also said “this country will not stand for it, that I can tell you.”

He said the American drone was unarmed and unmanned and “clearly over international waters.” It would have “made a big, big difference” if someone had been inside, he said.

Democratic leaders in particular urged the president to work with U.S. allies and stressed the need for caution to avoid any unintended escalation. Senate Democratic leader Chuck Schumer said he told Trump that conflicts have a way of escalating and “we’re worried that he and the administration may bumble into a war.”