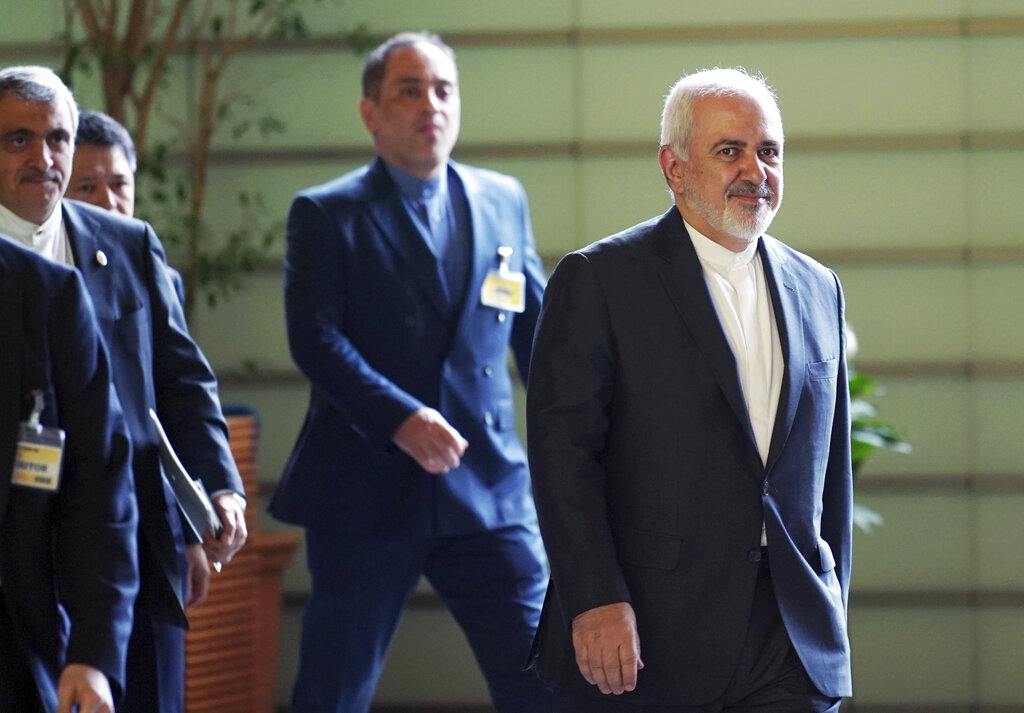 DUBAI, United Arab Emirates (AP) — Iran’s foreign minister today said sanctions imposed by the Trump administration are “unacceptable” but that his country is committed to an international nuclear deal that has steadily unraveled amid rising tensions.

On a visit to Tokyo, Mohammad Zarif defended Iran’s right to respond to the U.S. pullout from the nuclear deal last year and the imposition of sanctions.

“We believe that escalation by the United States is unacceptable and uncalled for. We have exercised maximum restraints,” he said. In other comments carried on the semi-official Mehr news agency, Zarif was quoted as saying “a multilateral deal cannot be treated unilaterally.”

Recent days have brought allegations of sabotage attacks targeting oil tankers off the coast of the United Arab Emirates, a drone attack on a Saudi oil pipeline claimed by Yemen’s Iran-allied Houthi rebels, and the dispatch of U.S. warships and bombers to the region.

“The attack by the Iranian-backed Houthi militias against the two Aramco pumping stations proves that these militias are merely a tool that Iran’s regime uses to implement its expansionist agenda in the region,” he wrote.

Iran has been accused by the U.S. and the U.N. of supplying ballistic missile technology and arms to the Houthis, which Tehran denies.

Saudi Arabia responded to Tuesday’s drone attack with a wave of airstrikes on Houthi targets in Yemen’s rebel-held capital, Sanaa. Today, residents scrambled to pull 14 wounded people from the rubble of a building.

Fawaz Ahmed told The Associated Press he saw three bodies being retrieved from the rubble — a father, mother and child, all buried together. Yemen’s Health Ministry said the strikes killed six people, including four children, and wounded more than 40.

The ministry says 41 people were also wounded, including two women of Russian nationality.

A Saudi-led coalition has been at war with the Houthis since 2015, and carries out near-daily airstrikes. The drone attacks on the pipeline marked one of the rebels’ deepest and most significant strikes inside Saudi territory since the conflict began.

The Saudi-led coalition acknowledged in a statement it had struck a number of Houthi targets today, including what it said were weapons depots and military sites.

At the root of the recent spike in Persian Gulf tensions appears to be President Donald Trump’s decision a year ago to pull the U.S. from Iran’s nuclear deal with world powers, embarking on a maximalist sanctions campaign against Tehran to cripple the country’s economy.

In response, Iran’s supreme leader issued a veiled threat Tuesday, saying it wouldn’t be difficult for the Islamic Republic to enrich uranium to weapons-grade levels. He also said that while his country would not negotiate with the United States, Iran is not seeking war.

On Wednesday, the U.S. State Department ordered all nonessential government staff to leave Iraq, and Germany and the Netherlands both suspended their military assistance programs in the country in the latest sign of tensions.

The movement of diplomatic personnel is often done in times of conflict, but what is driving the decisions from the White House remains unclear. Iraq is home to powerful pro-Iranian militias, while also hosting more than 5,000 American troops. The U.S. military’s Central Command said its troops were on high alert, without elaborating.

Last week, U.S. officials said they had detected signs of Iranian preparations for potential attacks on U.S. forces and interests in the Middle East, but Washington has not publicly provided any evidence to back up claims of an increased Iranian threat.

A senior British officer in the U.S.-backed coalition fighting the Islamic State group appeared to push back against the U.S. claims, telling reporters earlier in the week that there’d been no increased threat from Iranian-backed forces in Iraq and Syria. Maj. Gen. Chris Ghika’s comments exposed international skepticism over the American military buildup.

Iran recently threatened it might resume higher enrichment by July 7, beyond the level permitted by the current deal between Tehran and world powers. The U.S. pulled out of the deal last year, re-imposing sanctions that penalize countries and global companies that do business with Iran.

Though Iran maintains its nuclear program is for peaceful purposes, scientists say the time needed to reach the 90 percent threshold for weapons-grade uranium is halved once uranium is enriched to around 20 percent.

However, he also said the UAE is “very committed to de-escalation” after the alleged sabotage of oil tankers off the country’s coast on Sunday. Gargash declined to directly blame Iran for the attack, though he repeatedly criticized Tehran.

In a joint letter to the U.N. Security Council, the UAE, Saudi Arabia and Norway said that while the alleged sabotage targeted four ships, “the attacks damaged the hulls of at least three.” It did not elaborate. A U.S. official previously said all four ships sustained damage at or below their waterlines.

Meanwhile, the Qatar-funded satellite news broadcaster Al-Jazeera said Qatar is trying to “defuse escalating tensions.” It cited an anonymous official as saying that Qatar’s foreign minister, Sheikh Mohammed bin Abdulrahman Al Thani, had traveled to Tehran in recent days to speak with his Iranian counterpart, and that the U.S. was aware of the trip in advance.

Qatar hosts the forward headquarters of the U.S. military’s Central Command at its vast Al-Udeid Air Base. Several of the B-52 bombers ordered by the White House to the region amid the latest escalation between Washington and Tehran are stationed there.

Qatar has grown closer to Iran diplomatically over the past two years after four Arab nations, including Saudi Arabia and the UAE, cut ties to protest its regional policies.

SUNY chancellor will be next Ohio State University president

Report: Three more officers to be charged in Floyd’s death

MINNEAPOLIS (AP) -- The three other police officers on the scene when a Minneapolis officer pressed his knee on ...