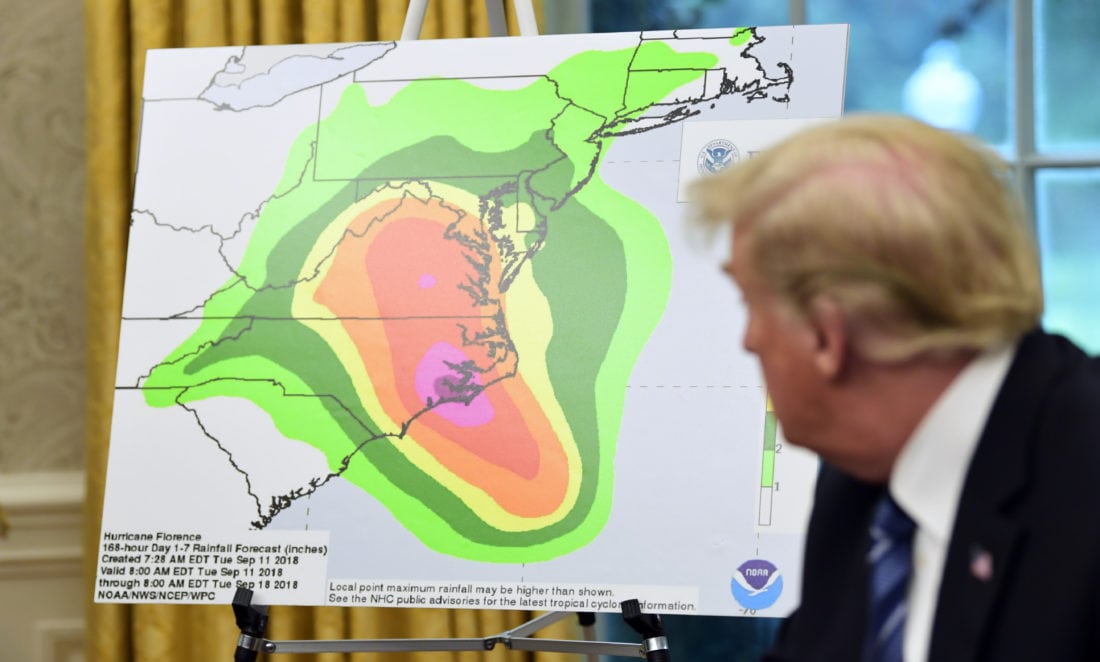 President Donald Trump looks at a chart showing potential rainfall totals from Hurricane Florence during a briefing in the Oval Office of the White House in Washington, Tuesday, Sept. 11, 2018. (AP Photo/Susan Walsh)

WASHINGTON (AP) — President Donald Trump said this morning the government is ready for massive Hurricane Florence and insisted that his administration’s response to the devastation in Puerto Rico last year was an “underappreciated great job.”

In a series of morning tweets as Florence bore down on the Southeast U.S. coast, Trump bristled over criticism of the response to Hurricane Maria, in which 3,000 people died in Puerto Rico.

“We got A Pluses for our recent hurricane work in Texas and Florida (and did an unappreciated great job in Puerto Rico, even though an inaccessible island with very poor electricity and a totally incompetent Mayor of San Juan). We are ready for the big one that is coming!” Trump tweeted.

His next dispatch warned people about Florence, predicted to dump massive amounts of rain on the already-soggy Southeast later this week.

“Hurricane Florence is looking even bigger than anticipated. It will be arriving soon. FEMA, First Responders and Law Enforcement are supplied and ready. Be safe!”

The administration’s efforts in Puerto Rico received widespread criticism, and he battled with Mayor Carmen Yulín Cruz. But after visiting the island last September, Trump said that Puerto Ricans were fortunate that the storm did not yield a catastrophe akin to the havoc wreaked by Hurricane Katrina along the Gulf Coast.

All told, about 1,800 people died in that 2005 storm. Puerto Rico’s governor last month raised the U.S. territory’s official death toll from Hurricane Maria from 64 to 2,975. The storm is also estimated to have caused $100 billion in damage.

A day earlier, the president praised the response to the series of storms. “I think Puerto Rico was an incredible, unsung success.”

The governor of Puerto Rico, Ricardo Rossello, seized on Trump’s use of the word “successful” and said in a statement issued later Tuesday: “No relationship between a colony and the federal government can ever be called ‘successful’ because Puerto Ricans lack certain inalienable rights enjoyed by our fellow Americans in the states.”

Rossello called Hurricane Maria “the worst natural disaster in our modern history” and said work still remained before they could move on to other stages of recovery. He also said he was still waiting for Trump to respond to a petition to help Puerto Rico complete work on emergency housing restoration programs and debris removal.

Trump, having long struggled to express empathy at times of national crises, sparked outrage when during his visit to the island he feuded with the mayor of San Juan and passed out paper towels to victims like he was shooting baskets.

While defending the handling of the previous storm, he urged caution in regards to the new one bearing down on North Carolina, South Carolina and Virginia.

“The safety of American people is my absolute highest priority,” Trump told reporters in the Oval Office. “We are sparing no expense. We are totally prepared. We are ready. We are ready as anybody has ever been.”