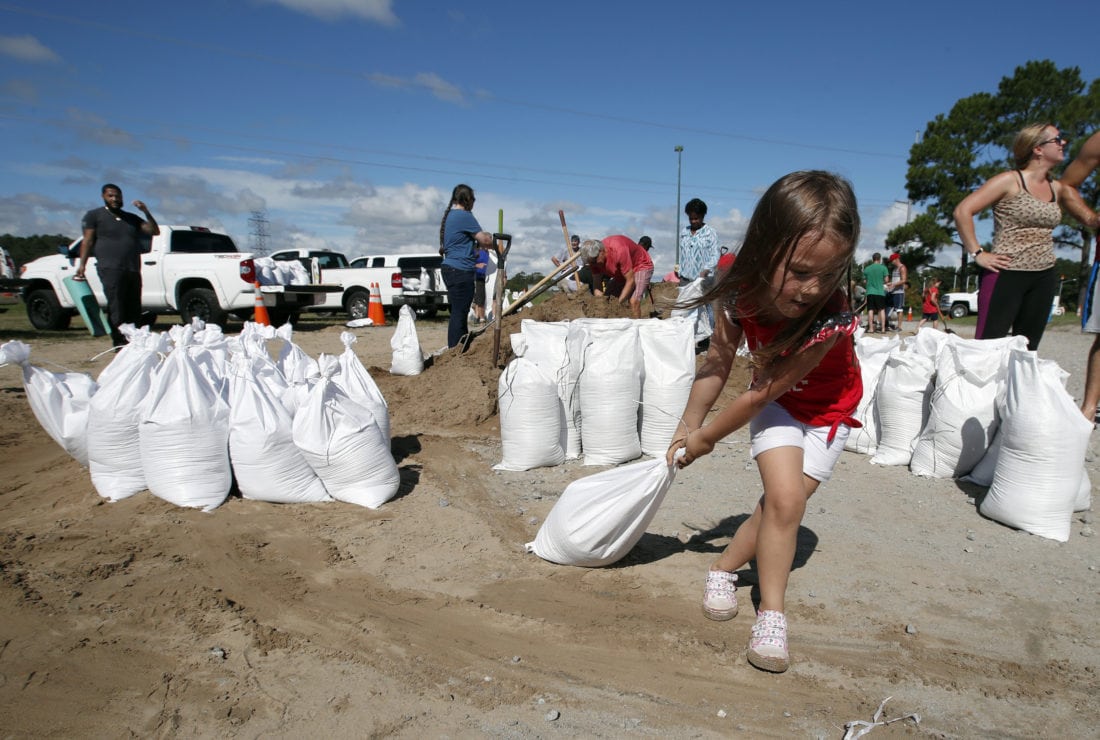 Chloe Heeden, 4, from Virginia Beach, Va., drags a sandbag to her father's car today in Virginia Beach, Va., as Hurricane Florence moves towards the eastern shore. The National Hurricane Center's projected track had Florence hovering off the southern North Carolina coast from Thursday night until landfall Saturday morning or so, about a day later than previously expected. The track also shifted somewhat south and west, throwing Georgia into peril as Florence moves inland. (AP Photo/Alex Brandon)

WILMINGTON, N.C. (AP) — People who thought they were relatively safe from the onslaught of Hurricane Florence began boarding up and Georgia’s governor declared a state of emergency today as uncertainty over the path of the monster storm spread worry along the Southeastern coast.

Closing in with terrifying winds of 125 mph and potentially catastrophic rain and storm surge, Florence is expected to blow ashore Saturday morning along the North Carolina-South Carolina line, the National Hurricane Center said.

While some of the computer forecasting models conflicted, the latest projections more or less showed the storm shifting southward and westward in a way that suddenly put more of South Carolina in danger and imperiled Georgia, too.

Portions of the Georgia coast face a growing threat of strong winds as Hurricane Florence nears the Southeast coast, but officials there aren’t calling for evacuations.

Hurricane Florence has gotten a little bit weaker but it remains a very large and dangerous storm.

At 2 p.m., the storm was centered 435 miles southeast of Wilmington, North Carolina, moving at 16 mph, with the potential for 1 to 3 feet of rain in places — enough to touch off catastrophic flooding inland and an environmental disaster, too, if the water inundates the region’s many industrial waste sites and hog manure ponds.

Some fluctuations in strength are expected through Thursday morning. Florence will weaken once it stops drawing energy from warm ocean waters, but it’s still expected to make landfall late Thursday or early Friday as an extremely dangerous major hurricane.

The National Hurricane Center says a buoy about 100 miles northeast of Florence’s eye has clocked hurricane-force wind gusts and sustained winds of 53 mph.

Pence’s office said in a news release today that Pence would visit the Delta Air Lines TechOps facility in Atlanta on Thursday, and would later stop by the American Red Cross Disaster Field Supply Center to thank the staff and volunteers.

The TechOps facility provides aviation maintenance to Delta and services its fleet.

At the White House, President Donald Trump urged people to “get out of its way.”

With the change in the forecast, Georgia Gov. Nathan Deal issued an emergency declaration for the entire state to ease regulations on trucks hauling gasoline and relief supplies, and asked people to pray for those in Florence’s path. North and South Carolina and Virginia declared emergencies earlier in the week.

The shift in the projected track had areas that once thought they were out of range worried. In South Carolina, Beaufort County Emergency Management Division Commander Neil Baxley told residents they need to prepare again for the worst just in case.

“We’ve had our lessons. Now it might be time for the exam,” Baxley said late in the morning.

The hurricane center’s projected track had Florence hovering off the southern North Carolina coast starting Thursday night before finally blowing ashore. That could punish a longer stretch of coastline, and for a longer period of time, than previously thought.

The trend is “exceptionally bad news,” said University of Miami hurricane researcher Brian McNoldy, since it “smears a landfall out over hundreds of miles of coastline, most notably the storm surge.”

If some of the computer projections hold, “it’s going to come roaring up to the coast Thursday night and say, àI’m not sure I really want to do this, and I’ll just take a tour of the coast and decide where I want to go inland,'” said Jeff Masters, meteorology director of the private Weather Underground forecasting service.

As of Tuesday, about 1.7 million people in North and South Carolina and Virginia were under warnings to evacuate the coast, and hurricane watches and warnings extended across an area with about 5.4 million residents. Cars and trucks full of people and belongings streamed inland.

“This is not going to be a glancing blow,” warned Jeff Byard, an administrator with the Federal Emergency Management Agency. “This is going to be a Mike Tyson punch to the Carolina coast.”