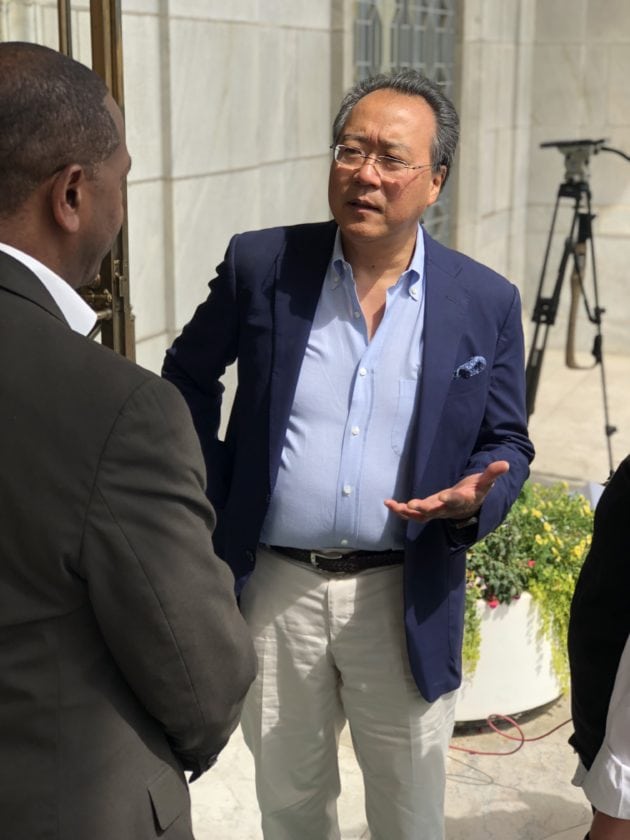 Special to the Tribune Chronicle Cellist Yo-Yo Ma greets Warren Mayor Doug Franklin outside the Butler Institute of American Art in Youngstown before an invitation only luncheon, dialogue and strategy session with politicians and arts professionals on expanding revitalization efforts and mobilizing the Mahoning Valley's cultural assets. Ma will perform as part of a free event starting at 5 p.m. today at the Warren Community Amphitheatre.

WARREN – Hundreds gathered at Quinby Park Monday morning as the first event in a full day of activities planned around Yo-Yo Ma’s visit to the Mahoning Valley.

The cellist was not in attendance, but representatives from the Kennedy Center for the Peforming Arts in Washington, D.C., and Americans for the Arts were there. Warren was the fourth stop on the Kennedy Center’s 50-stop Arts Across America campaign, which celebrates communities committed to using the arts to promote connection, a strong creative economy and increased cultural citizenship.

“We’re going across America to find the hidden gems in America, the small towns that are doing big work, the towns that don’t always get the recognition they deserve and the places we in D.C. can really learn from,” said Kathy Fletcher, national director of Turnaround Arts at the Kennedy Center.

Trumbull Neighborhood Partnership unveiled two pieces of public art, a decorative bird bath and a trelice, by Youngstown artist Tony Armeni, that were paid for with a grant from the Ohio Arts Council.

TNP announced a $40,000 grant from the William Swanston Charitable Foundation that is earmarked to improve active play in young children. Attendees were encouraged to share their ideas about what kinds of playground equipment and other amenities they would like to see at the park.

Ma from noon to 3 p.m. attended an invitation only luncheon at the Butler Institute of American Art in downtown Youngstown. Scheduled to follow was a discussion on expanding revitalization efforts and mobilizing the Mahoning Valley’s cultural assets.

He was scheduled to tour the Mahoning County Juvenile Justice Center in Youngstown after before heading to Warren at about 5 p.m. for several events, including the concert featuring Ma and the Warren Philharmonic Orchestra.

The concert will be followed by a community forum.