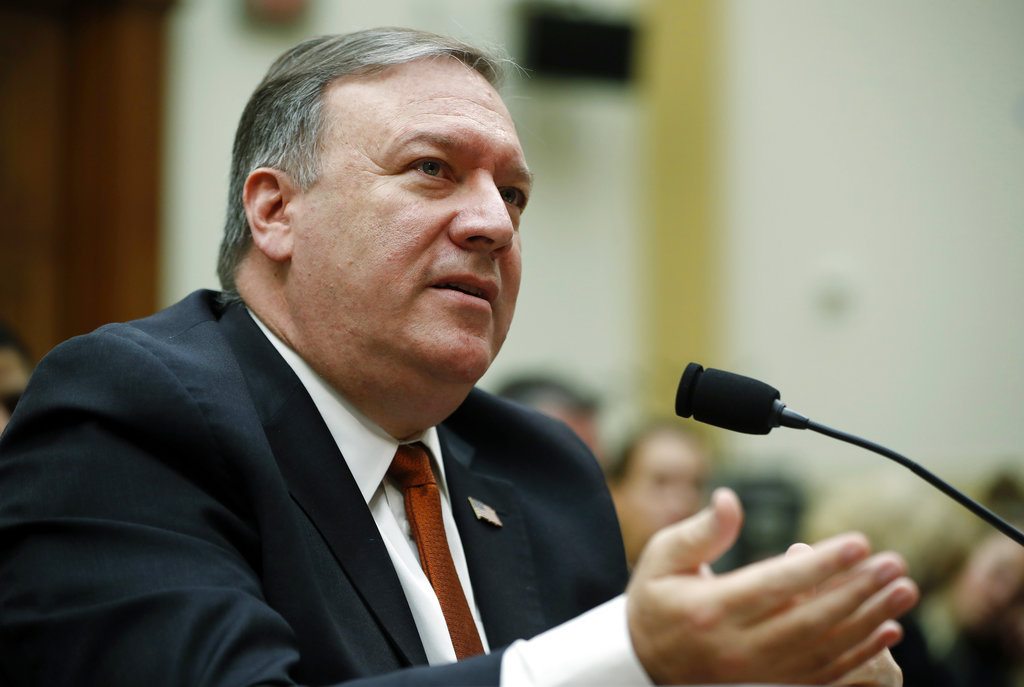 WASHINGTON (AP) — Secretary of State Mike Pompeo said today he was “very hopeful” that the U.S.-North Korean nuclear summit would take place as planned next month, although he laid the meeting’s fate squarely on Kim Jong Un.

The decision about whether the June 12 meeting in Singapore between Kim and President Donald Trump happens is “ultimately up to Chairman Kim,” Pompeo told the House Foreign Affairs Committee.

Lawmakers’ questioning of Pompeo followed Trump’s comment Tuesday that “there’s a very substantial chance” the meeting would not proceed as scheduled.

Pompeo said the North Korean leader “asked for the meeting, the president agreed to meet with him. I’m very hopeful that meeting will take place.”

The former CIA director, who has met twice with Kim since the start of April, told the committee that it’s his hope that when Trump and Kim confer, “we can get the North Koreans to make this strategic shift about how best to serve the country — that the nuclear weapons program isn’t in fact the thing that keeps the regime in power, but the thing that prevents the regime from being in a place it wants to be with economic success.”

Pompeo said he had raised the issue of human rights with Kim “and it will be part of the discussions as we move forward.” Asked by lawmakers whether he had a commitment from Kim to make it the part of a deal, Pompeo said, “We have broad outlines of what it is that each nation is prepared to do.”

The summit would offer a historic chance for peace. But there also is the risk of a diplomatic failure that would allow the North to revive and advance its program.

Trump’s newfound hesitation appears to reflect recent setbacks in efforts to bring about reconciliation between the two Koreas, as well as concern whether the self-proclaimed deal-maker can deliver a nuclear accord with Kim.

“The fate and the future of the Korean Peninsula hinge” on the meeting, South Korea’s president, Moon Jae-in, told Trump in an Oval Office meeting Tuesday.

Trump said Kim had not met unspecified “conditions” for the summit. But Trump also said he believed Kim was “serious” about negotiations. Moon expressed “every confidence” in Trump’s ability to hold the summit and bring about peace.

“I have no doubt that you will be able to … accomplish a historic feat that no one had been able to achieve in the decades past,” Moon said.

Trump said he didn’t want to “totally commit” himself on whether North Korea should denuclearize all at once or in phases. “It would certainly be better if it were all in one,” Trump said, before adding, “You do have some physical reasons that it may not be able to do exactly that.”

Trump suggested the summit could be delayed rather than canceled: “It may not work out for June 12, but there is a good chance that we’ll have the meeting.”