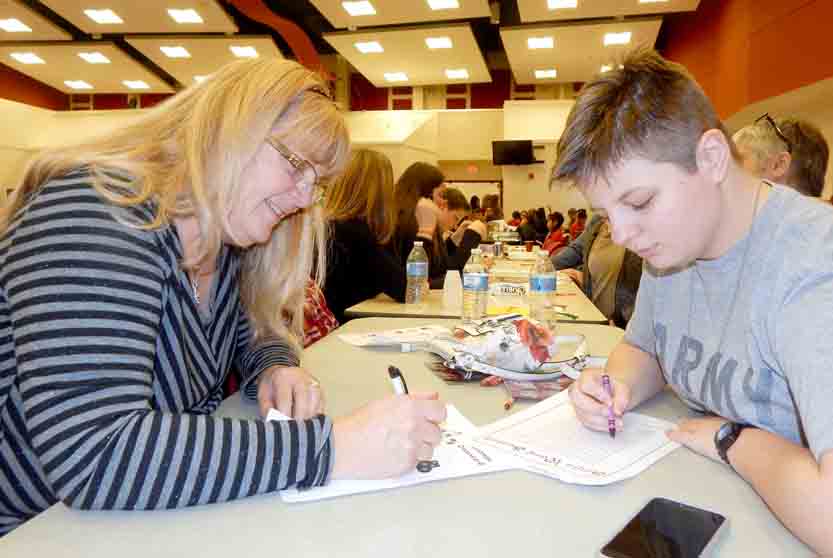 GIRARD — Howland resident Kathy Shirley said she was “completely shocked” when Big Brothers, Big Sisters of the Mahoning Valley named her 2017 Volunteer of the Year.

Shirley was recognized for putting together a large garage sale fundraiser at the Girard Multi-Generational Center which benefited the organization.

”There was a lot of effort from the board and volunteers who donated items and helped with setting up and selling at the event,” Shirley said.

With her at the event was Lydia Smith of Cortland, Shirley’s “little sister.”

”I thought it was pretty funny when they called her name and she had no idea. She had to go up in front of everyone. It was pretty exciting,” Smith said.

Brian Higgins, executive director of BBBS, said children and teens in the program and their families as well as ”big brothers and sisters” were treated to a catered dinner, visit from Santa Claus and presented gifts.

Higgins said each child received a bag of gifts that were donations from the Giving Trees in the community, which has tags with children’s wishes for Christmas.

”We had many extra tags on the trees in the community at different locations. We are excited to be giving so many gifts this year. We are thankful for the help from the community,” Higgins said.

Higgins said Shirley’s garage sale fundraiser was a big help to the organization.

In addition to Shirley, also recognized were 2017 Big Brother of the Year Jim Mashburn of Mineral Ridge and 2017 Big Sister of the Year Teresa Stupka of Canfield.

Higgins said this was one of the main times, in addition to Scrappers games, that all the big brothers, sisters and the children and teens all get together in one place.

”We hold this event to really thank those who make this possible. This is our largest event in terms of getting everyone together in one place,” he said.

CELEBRATING OUR ROOTS: The Trumbull County NAACP will hold “Celebration Of Our Roots” for Black History Month ...

Despite rumors, Ford not in area

99 years ago in 1921 The Ford Motor Company plant rumor was revived here again when it was stated that Henry Ford ...

HOWLAND — District students are preparing for more success in the annual Destination Imagination ...

• McDONALD BOARD OF EDUCATION Buildings and Grounds Committee will meet 6 p.m. Monday at the high school media ...