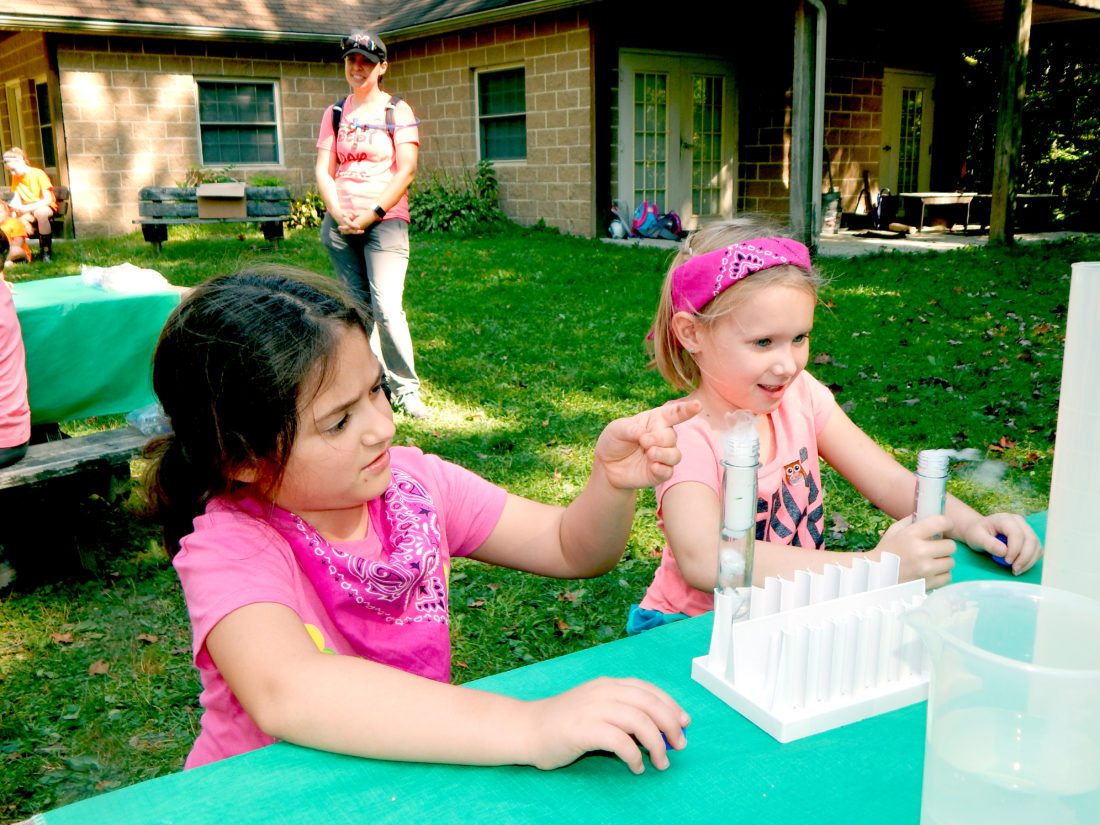 With the theme, “The Wizardly World of Camp Sugarbush: Looking Back on Harry Potter,” more than 150 Scouts went to eight different camp sites, participating in activities involving astronomy, transfiguration, herbology, owl care, hot-air balloons and the game “quidditch” that was in the Harry Potter books.

The annual camporee has been held for more than 25 years with themes of pirates, the Old West and the medieval period.

Julie Strama, committee member, said the eight stations all related to themes from the series created by J.K. Rowling.

”There is a class about owls where the Scouts looked inside pellets to see what the owls had eaten,” she said.

Barbara Rosenblum, a Scout leader, said the Scouts found bones of rodents and birds that owls had eaten.

Mary Pipino of Howland, who has been involved in Scouting, said Harry Potter had a pet owl named Hedwig and in the book, owls were used to carry mail.

Rosenblum said the pellets were sanitized to be looked at.

John Moran brought a hot air balloon to the event for a lesson on flight.

Pipino said some of the Scouts marking their last year in Scouting have been involved for the past 12 years and attended 12 camporees.

”This year, there is a large group of seniors who will be done with Scouting. Some have been here 12 and 13 years,” Pipino said.

Melody Michetti, 17, of Fowler, said the Roman medieval theme was her favorite with a catapult.

“The camporee provided a nice break for everyone. The topics we knew ahead of time about but not everything that was going on. There were lots of surprises,” Michetti said.

Emily Strama, 17, of Vienna, said the surprise activities were what made the camporees fun.

”I liked the space theme camp and going up in a hot -air balloon,” she said.

Kisa Bowan, 18, of Vienna, said she likes to go camping and remembers the early camporees when the Scouts were in the creek.

She said she might come back as an adult helper at the camps.

Ariel Takat of Howland said she was in camporee 11 years and now came back as an adult helper setting up the quidditch game.

”It was always a lot of fun. I have played quidditch before so it is a fun game to learn,” Takat said.

After participating in the camp stations, Scouts could take part in archery, canoes and other activities.

Pipino said many of the scouts will attend the annual Scout conference Oct. 6 to 8 in Columbus.

In a time in which everyone seems to have a voice — especially everyone with a social media account and a ...

SUTLIFF LECTURE: The Sutliff Museum will present the final lecture in the Nurturing Pathways to Freedom lecture ...

NEWTON FALLS — With concerns by residents to address some crime in their neighborhoods, village officials and the ...