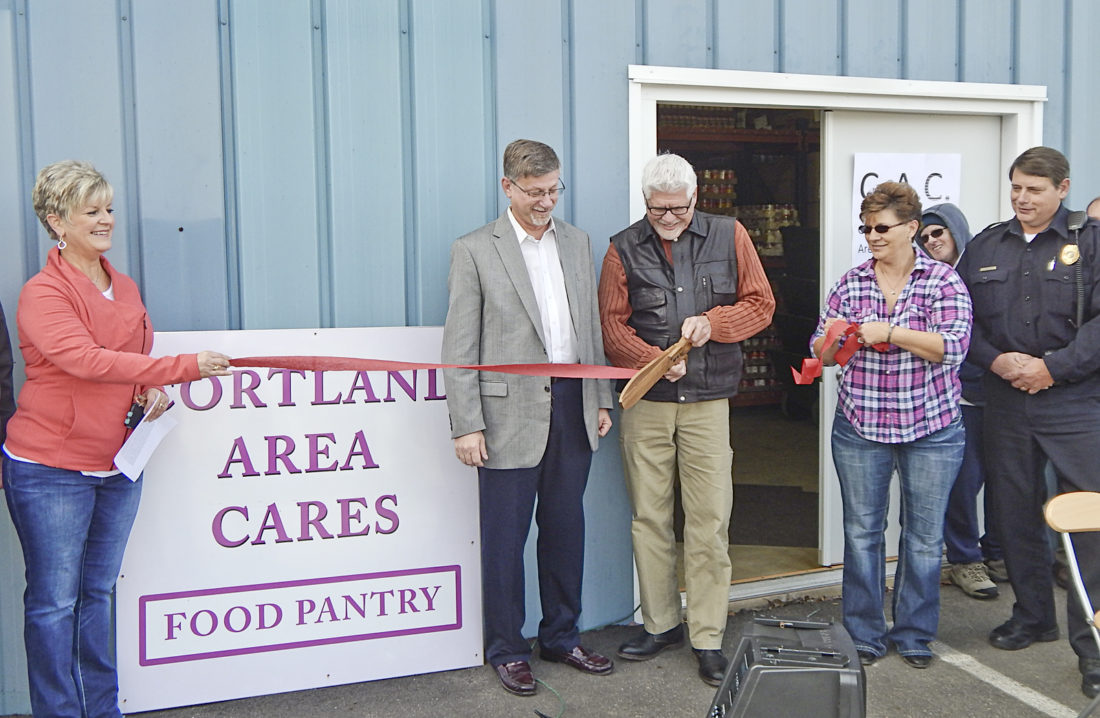 CORTLAND — Since it began more than 30 years ago, Cortland Area Cares has expanded from helping 38 families to assisting 244, sometimes more. This week, CAC opened a larger food pantry at 1000 Fowler Street.

A ribbon-cutting and open house over the weekend was attended by local officials, area service clubs and churches, and volunteers who help at the pantry.

CAC serves residents in the Lakeview Local Schools district as well as members of any of the seven Lakeview Outreach and Fellowship (LOAF) churches.

Jean Bolinger of Cortland Area Cares said the group has been expanded to accommodate the growing need for food. She said the new location in a former factory provides more room and better parking.

Pastor David Vensel of Cortland United Methodist Church said the pantry, started by a group of church women, has expanded into a very “ecumenical and secular effort by the entire community.”

“We give all of you thanks to help the needy among our community. The vision planted so many years ago and by their efforts, desire and love we have grown and touched so many lives,” Vensel said.

In the early 1980s, a group of lay people from Cortland churches met to discuss the possibility of establishing a food pantry in the area. The idea was presented to the local ministerial association, which agreed to the proposal.

One small room at the Cortland Church of God served as the pantry, filled with food purchased by two women, Elva Hopkins and Betty Canfield. Funding and volunteers came from the various churches.

Bolinger said that when the small room became inadequate, the pantry moved to larger quarters in the lower level of the church. In 2007, space was rented on Pearl Street, but the number of clients who were served each month vastly outgrew that building and the small parking area around it.

Donna Kittle, who will serve as pantry manager, said CAC serves hundreds of people each month. The food is purchased from Second Harvest Food Bank along with donations from residents and service clubs.

Lakeview Schools teachers Angela Sarco and Jamie Brown had students with the Beta Clubs at the high school and middle school fill a school bus recently with 4,000 pounds of nonperishables and canned goods. The effort was part of the National Day of Service sponsored by Ameriprise, Brown said.

”The community, schools and churches have all been so helpful,” she said.

Juanita Smith, a volunteer, said a lot of good work has been done through the food pantry helping many residents.

”The volunteers we have here are very dedicated. Every month, no matter what kind of weather — hot, cold, rain and snow — they are here to help. They do care about Cortland,” Smith said.

A goal is to get more youth involved at helping at the food pantry.

BRACEVILLE — The varied accomplishments and inventions of African Americans were highlighted at the annual Black ...

• CHAMPION TOWNSHIP TRUSTEES will meet 3:30 p.m. Monday at the community room at the high school. • NEWTON ...

­­­Hello, Trumbull County. Have you ever had guests quickly overstay their welcome like cousin Eddie in the ...