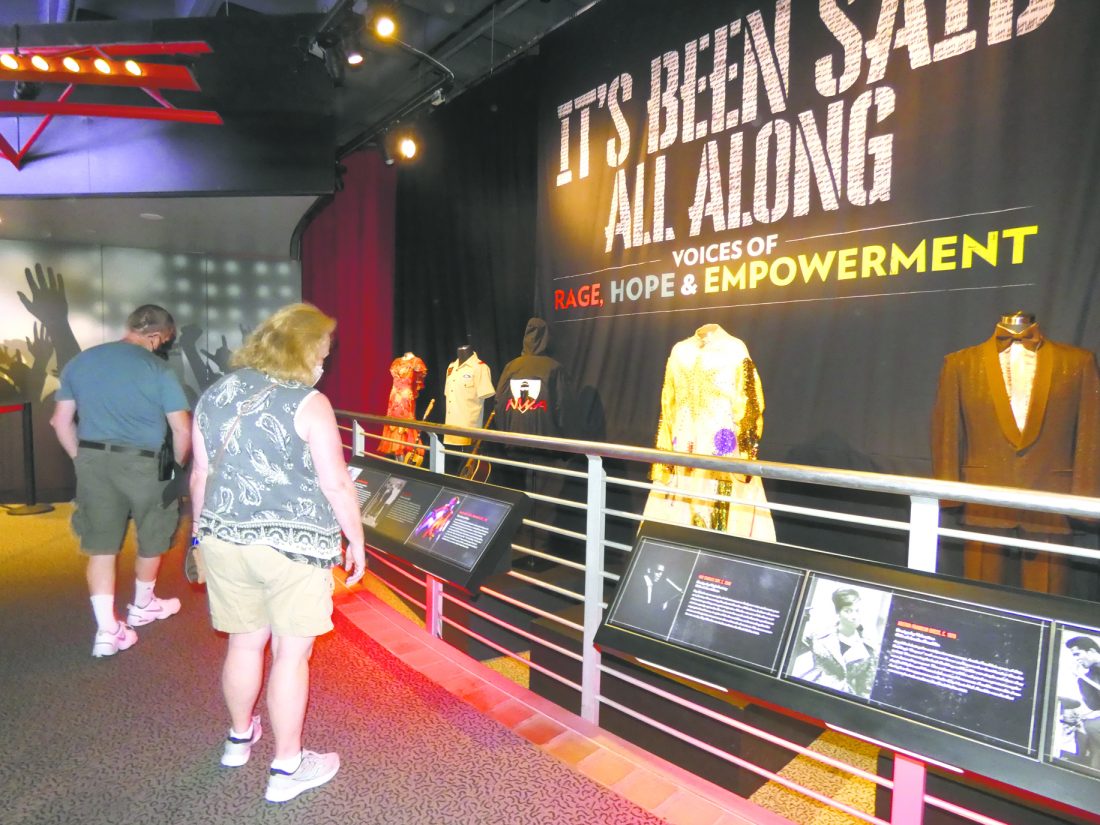 Visitors check one of the displays in "It's Been Said All Along: Voices of Rage, Hope & Empowerment," a new exhibition at the Rock and Roll Hall of Fame and Museum in Cleveland. (Staff photo / Andy Gray)

CLEVELAND — “Shut up and sing” never has been a philosophy followed by contemporary music’s most powerful voices.

As singer-songwriter Nina Simone said, “An artist’s duty, as far as I’m concerned, is to reflect the times.”

Simone’s words are prominently featured in “It’s Been Said All Along: Voices of Rage, Hope & Empowerment,” a new exhibition at the Rock and Roll Hall of Fame and Museum in Cleveland. It uses artifacts from the museum’s permanent collection and new submissions to illustrate the role singers and musicians have played in giving voice to social justice movements.

Telling that story has been part of the museum’s mission since it opened 25 years ago, according to exhibit curator Nwaka Onwusa.

“What we wanted to do, especially during this time, is amplify these voices,” she said. “We wanted to plant seeds of understanding, encouragement and hope, just to talk about fighting for a better tomorrow for justice and to highlight the musicians who have used their platforms to do that.”

Set up just inside the entrance of its main exhibition hall, the display highlights a diverse range of performers, from crooner Nat King Cole to current rapper D Smoke. Onwusa also used the work of African-American photographers like Chuck Stewart, whose work adorned more than 2,000 album covers, to complement the message of the show, instead of using the images of protesters being attacked that often accompany social justice-themed museum exhibits.

“I wanted to highlight some of the voices we don’t always talk about and celebrate them in different ways,” she said. “This sampling highlights some anthemic songs, anthemic voices and some prolific trailblazers who represent what rock ‘n’ roll really is.”

Not surprisingly, the exhibits features plenty of one-of-a-kind artifacts, such as the Valentino gown Aretha Franklin wore for her first Radio City Music Hall concert. That concert included one of her first public performances of “Respect,” which became an anthem of both the civil rights and the women’s rights movements.

There’s a jumpsuit worn on stage by James Brown; a dress worn by Mavis Staples and an electric guitar belonging to Pops Staples, both of the Staples Singers; and a leather vest belonging to Isaac Hayes, who headlined the 1972 Wattstax benefit concert in Los Angeles.

“I really wanted to represent him as a global voice for unity,” Onwusa said.

Another item sure to catch the attention of visitors is the guitar strap used by Jimi Hendrix during his 1969 appearance at Woodstock.

“To use that platform and that opportunity to perform ‘The Star-Spangled Banner’ the way he did, talk about a voice of rage, a voice of empowerment,” Onwusa said.

Another set of handwritten lyrics — D Smoke’s “Let Go” — were written the day George Floyd lost consciousness under the knee of a Minneapolis police officer and died. An acoustic guitar belonging to Fantastic Negrito represents his 2017 song “In the Pines (Oakland),” a 2017 song about a mother whose son was gunned down.

“These were influences to my musical experiences,” Onwusa said. “Someone like Fantastic Negrito, I saw him live at a festival, and the power I felt, the energy of his music and the lyrics, it just really resonated with me.”

“It’s Been Said All Along” will be on display for the next year, and Onwusa said they are in the process of also creating a virtual version of the exhibition that can be enjoyed online.

Soprano Marian Vogel will be the first performer in a new online series presented by Youngstown’s Opera Western ...

In some ways, “I Used to Go Here” is a more introspective and far less bawdy version of “Old ...

The 910th Airlift Wing and the Youngstown Air Reserve Station in Vienna will be the focus of the next program in ...

When people talk about low-budget films, they often are referring to movies with six-figure budgets. Even “The ...