This Dracula wants your blood … for hospitals 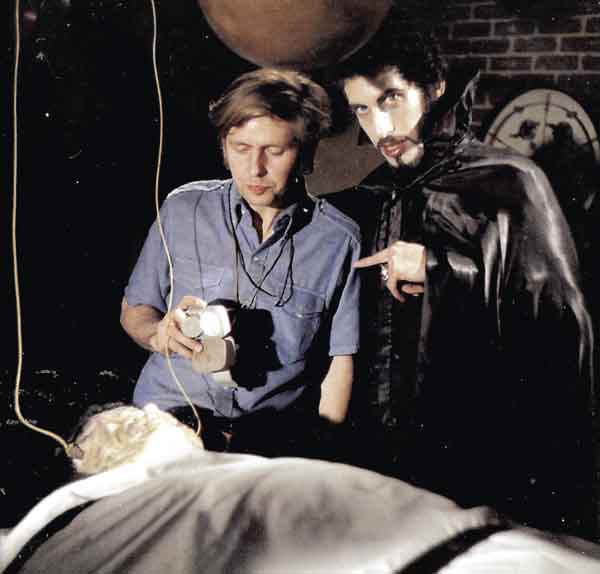 Low-budget horror movies and gimmicks — both were drive-in staples when outdoor screens numbered in the thousands, not the few hundred that remain today.

Skyway Drive-In in Warren Township brings back both as the next stop for Sam Sherman’s Retro Road Show “Camp Classics” Tour, which includes two horror films directed by Al Adamson and produced by Sherman in 1971 — “Dracula vs. Frankenstein” and “Brain of Blood.” It opens Friday.

Adamson cranked out more than 30 movies between 1965 and 1978, everything from horror to biker films (“Satan’s Sadists”) to softcore skin flicks (“The Naughty Stewardesses”). Sherman has restored and digitized many of his old films and has made them available to drive-ins, the type of theaters where they originally played.

The gimmick for this double bill is that Raphael Peter Engel, who played Dracula in “Dracula vs. Frankenstein” and has a smaller role in “Brain of Blood,” appears on screen, complete with cape and fangs, to lead the audience in “The Vampire’s Oath of Blood.”

He doesn’t want the plasma for himself — the vampire is encouraging the audience to support local blood drives.

Moviegoers will get a card with the oath on one side and Dracula’s image on the other side when they pay their admission. The idea was inspired by a gimmick created for 1968’s “The Mad Doctor of Blood Island.” Audience members were given a packet of “green blood” — “I think it was apple juice and food coloring,” Engel said — and were told at a point in the movie to drink it while reciting the oath of the green blood.

“Why not have Dracula do something that speaks to the shift of cultural reality (due to the COVID-19 pandemic),” Engel said. “Instead of taking blood, he’s encouraging people to give blood.”

Movie buffs won’t find the name Raphael Peter Engel in the credits of either film or on IMDb.com. He used the stage name Zandor Vorkov, which was a combination of legendary horror actor Boris Karloff and Anton LaVey, founder of the Church of Satan.

Engel, who was born in Cleveland but spent most of his childhood in Florida, had a little acting experience. He moved to the Dayton area his senior year of high school, did some community theater there and landed an apprenticeship at Cleveland Play House. After a stint in the Army and a deployment to Vietnam, Engel was living in New York and helping Sherman and Adamson raise funds for their films.

He was offered the role of Dracula mainly because he was tall and thin like actor John Carradine, who had played Dracula in the ’60s, and much cheaper to hire.

Engel didn’t particularly like horror movies. His mother was partial to foreign films and took him to see those on occasion. One of the only “horror” movies he remembers seeing in a theater was “Abbott and Costello Meet Frankenstein,” which included Bela Lugosi reprising his iconic role as Dracula. He drew inspiration from Lugosi’s work, particularly how his Dracula changed once he got a taste of his victim’s blood.

“He felt rejuvenated,” Engel said. “I worked with that concept, being on edge and switching to getting calm when I got what I wanted.”

He might not have liked horror movies, but Engel did like drive-ins — “Especially with a young woman by my side. It was a good place to take whatever food you wanted, fill up your car with friends. It was a wonderful experience … There’s a sense of autonomy, being in a car or a truck or a motor van and sharing the experience with others. It’s not always good to have someone talking during a movie, but it didn’t matter in your car, and these films aren’t the ones you have to pay strict attention to. You can just have a lot of laughs with your friends.”

Engel has a smaller role in “Brain of Blood.” His character is killed in a wreck, and the thing he remembers most about the movie is filming that scene with a stunt driver speeding down a curve-filled mountain road.

“The guy was supposed to be a professional, but it almost seemed like the car got out of control,” he said. “There were moments where my life flashed before me … My expressions (of terror on screen) are pretty real.”

“Life Examined: The Impressionistic Realism of Sam Rosenthal” was supposed to open in March at the Butler ...

.38 Special to perform at Packard in Oct.

WARREN — .38 Special is booked to play Packard Music Hall on Oct. 16. The southern rock act has sold more than ...

With its 2020 season at the Robins Theatre canceled because of the COVID-19 pandemic, the Millennial Theatre ...