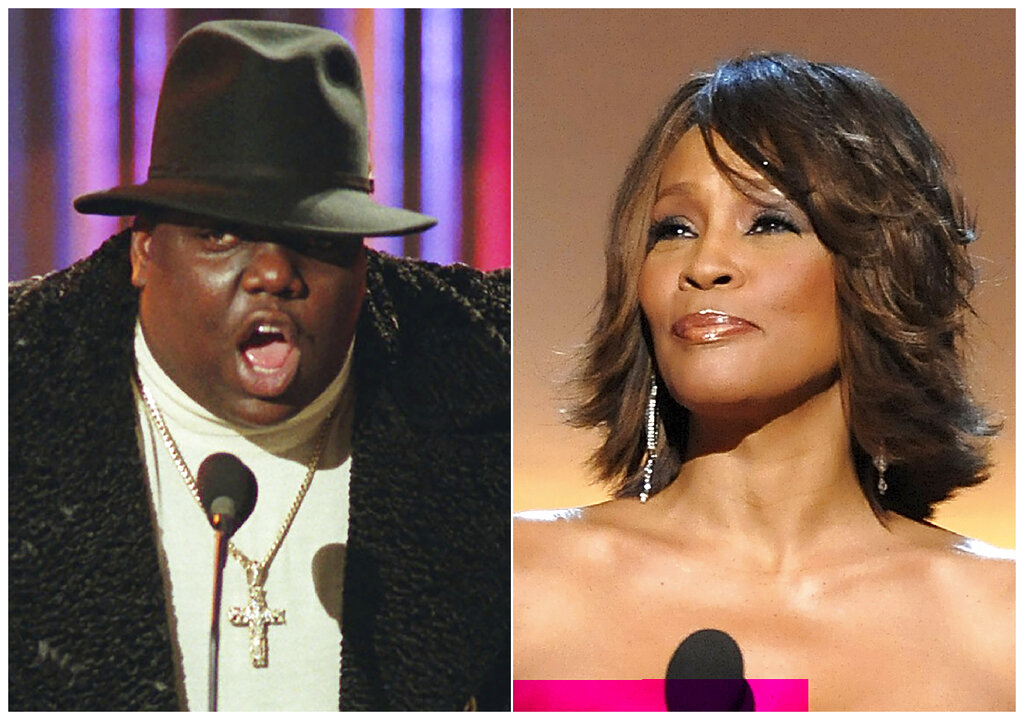 Rapper The Notorious B.I.G., left, and pop diva Whitney Houston are among the 2020 inductees for the Rock & Roll Hall of Fame. (AP Photo)

The Rock & Roll Hall of Fame Class of 2020 ranges from classic rock to rap and from pop divas to industrial icons.

The six acts who will be inducted in Cleveland on May 2 include Depeche Mode, The Doobie Brothers, Whitney Houston, Nine Inch Nails, The Notorious B.I.G. and T. Rex. Also selected for induction as nonperformers were Jon Landau and Irving Azoff.

Greg Harris, CEO of the Rock Hall, said, “It truly is a show of the multiple genres of music that are under that big tent, that umbrella of rock àn’ roll. Rock àn’ roll was never just skinny guys with long hair and guitars. … It’s always been diverse.”

In addition to a range of genres, Harris pointed out the geographic diversity of the lineup — Notorious B.I.G embodies Brooklyn, Trent Reznor’s Nine Inch Nails was born in the industrial midwest of Cleveland and Doobie Brothers started in northern California — and how the inductees themselves evolved.

“It’s amazing the way these bands changed through their life cycles,” Harris said. “The Doobie Brothers started one way, had great success, and then the Michael McDonald era comes in and was equally successful. … T.Rex started in the ’60s as a folk group and became glam rock pioneers. Whitney Houston had a lot of diverse styles, much like Aretha (Franklin). She could do ballads and hard-hitting rockers, soulful dance stuff and funk.”

The Rock Hall also announced that the ceremony will be shown live on HBO for the first time. In the past, the cable network has aired an edited version of the ceremony about a month after the event.

Harris said the move will mean some changes in the ceremony with stricter time limits on induction speeches (and possibly limiting the number of band members who are permitted to speak). It also will mean more music with performances by both the living inductees and acts they influenced.

Now that the inductee lineup is set, the work is under way to collect artifacts that will be displayed at the hall and to arrange the speakers who will inductee the artist and the performers at the ceremony.

Reznor told Rolling Stone Wednesday that Nine Inch Nails would perform. The Doobie Brothers, launching a 50th anniversary tour this summer, certainly will play, and Depeche Mode also seems likely. However, Houston, Notorious B.I.G. and all but the drummer from T.Rex are deceased, so other acts will have to represent them.

The nonmusic inductees could attract the biggest names. Landau has worked closely with Bruce Springsteen for more than 40 years and Azoff has an even longer relationship with The Eagles.

Harris didn’t deny that Springsteen would be the likely induction speaker for Landau. And while there might not be music as part of the induction speech, Harris said, “Having Bruce up there (for the all-star finale) would be pretty special. All that will come out in the next few weeks.”

Tickets to attend the ceremony at Public Auditorium in downtown Cleveland will go on sale to Rock Hall members on Feb. 25 and to the general public at 10 a.m. Feb. 27 through Ticketmaster.

Those who can’t make it into the main event will be able to enjoy a week of activities leading up to the induction ceremony. Harris said public concerts, fireworks and special programming at the Rock Hall will be part of the celebration.