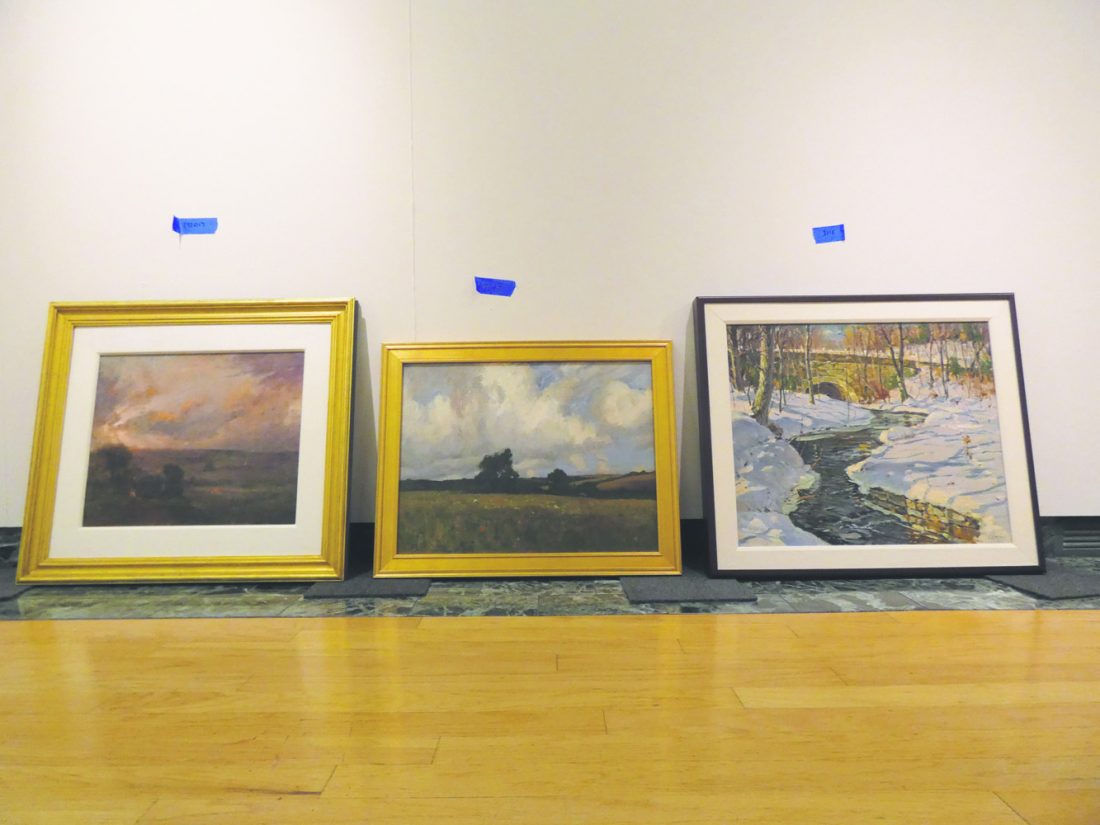 Paintings that are part of "In a New Light: American Impressionism 1870-1940" were spaced out on the floor, waiting to be hung, last week at the Butler Institute of American Art. (Staff photo / Andy Gray)

Several leading artists from the late 19th and early 20th centuries are featured in an exhibition opening Sunday at the Butler Institute of American Art.

“In a New Light: American Impressionism 1870-1940” includes works by more than 75 artists and is drawn from the art collection owned by Bank of America.

Butler Executive Director Louis A. Zona said, “The names are so familiar, it’s just too good not to take advantage of it. It shows other works by some of the same artists who are in the Butler collection.”

One of the elements of the traveling exhibition that Zona found interesting is how it alters the definition of what is considered American Impressionism.

The American artists also took a different approach than their French counterparts, Zona said, and he used one the most revered works of the Butler’s permanent collection — Robert Vonnoh’s “In Flanders Field,” to illustrate his point.

The show also takes artists traditionally associated with other concepts and illustrates the similarities to Impressionism that can be found in their work.

Jeneen Marziani, Ohio market president for Bank of America, said in a statement released by the Butler, “Bank of America is pleased to support The Butler Institute of American Art and honored to share works from our art collection with the Youngstown community. As one of the largest corporate supporters of arts and culture programming, we believe in the power of the arts to help communities thrive, educate, inspire, enrich societies and create greater cultural understanding.”

Zona expects the show to be popular at the Youngstown museum.

“As word gets out and word of mouth spreads over the next three months, I expect a lot of people coming in, especially when they see so many familiar names,” he said.

Several events are planned in conjunction with the exhibition. Free docent-guided tours will be available from noon to 2 p.m. on weekends, and Zona will give a lecture on “The Roots of Impressionism from Giverny to the Hudson River Valley” at 2 p.m. April 5.

Several of the Butler’s regular activities — Arts in the Early Morning, Stroller Art, Young Friends Adventure, Senior Art & Learn and Free Family Days — will feature programming inspired by “In a New Light.” Details can be found online at butler art.com.