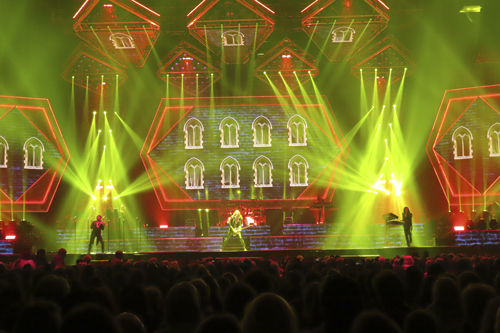 Correspondent photo / Bob Jadloski Members of Trans-Siberian Orchestra perform as a dazzling laser show plays in the background during the band’s second stop of its national tour Friday at the Covelli Centre in Youngstown. If you missed Friday’s performances, the band will be in Pittsburgh Dec. 22 and in Cleveland Dec. 27.

YOUNGSTOWN — It’s been doing this for 21 years now, but Trans-Siberian Orchestra proved to packed houses Friday it still has much more to offer fans — and even as some of the group’s founding members age, they have not missed a beat.

It was only the second day of TSO’s brand new six-week holiday tour, yet the flawless performance showed no bugs to be worked out.

This group that presents a unique mix of rock, classical orchestra and theatre returned to its roots for this year’s tour with a beautiful staging of the “Christmas Eve” tale, the show that started it all for TSO in the late 1990s. “Christmas Eve” involves the narration of an angel’s Christmas Eve trek around the world. Between chapters, moving renditions of traditional Christmas songs break out, highlighted by TSO’s always amazing visuals. Red and green lasers crisscross throughout the arena, and video screens float above the stage and floor seating. Colored spot lights and fiery pyrotechnic effects flash throughout the performance as incredible long-haired guitarists duel, accompanied by a high-energy violinist dashing non-stop around the stage without missing a beat or his breath. On stage, platforms holding the percussionist and one keyboardist rise so high into the air that it seems they could touch the arena rafters.

This year, a double-Tesla coil that rose up sporadically in the front of the house had fans sitting on the floor twisting in their seats to see lightning bolts shoot from the huge science fiction-like contraption, all timed to the beat of the band’s guitar solos.

All this visual chaos was accompanied, incredibly, by perfectly executed lovely renditions of holiday classics like “What Child is This,” “Hark! the Herald Angels Sing,” “March of the Toy Soldiers,” “God Rest Ye Merry Gentlemen” and “Joy to the World.”

TSO’s rendition of Christmas Eve / Sarajevo 12/24 brought the audience to its feet.

Fans were not to be left wanting. After the full 90-minute presentation of “Christmas Eve” wrapped up, TSO went on to perform for more than 60 additional minutes. It shared music the group has become known for, including a finale of an awe-inspiring version of “Carol of the Bells” that included what can be described only as a party for the senses. Alongside the flawless musical presentation, flames and sparklers shot from the stage, twinkling lights rose and dropped from the ceiling, and dancing colored laser beams cut through the smoke-filled arena, alternating with spotlights and strobes lighting up the dark, all executed to the beat of the music.

The tour continues at a high pace across the United States in coming weeks. Nearby stops include Dec. 22 in Pittsburgh and Dec. 27 in Cleveland.

The William Holmes McGuffey Historical Society will resume its Memories of a Lifetime series on July 18 with ...

The Speakeasy Lounge is downtown Warren is seeking submissions from local filmmakers for an independent film night. ...

A memorial to the life and work of Percy “Perc” Kelty is on display at the Youngstown Historical Center of ...

Disney+ ‘Hamilton’ is better and yet no match for live