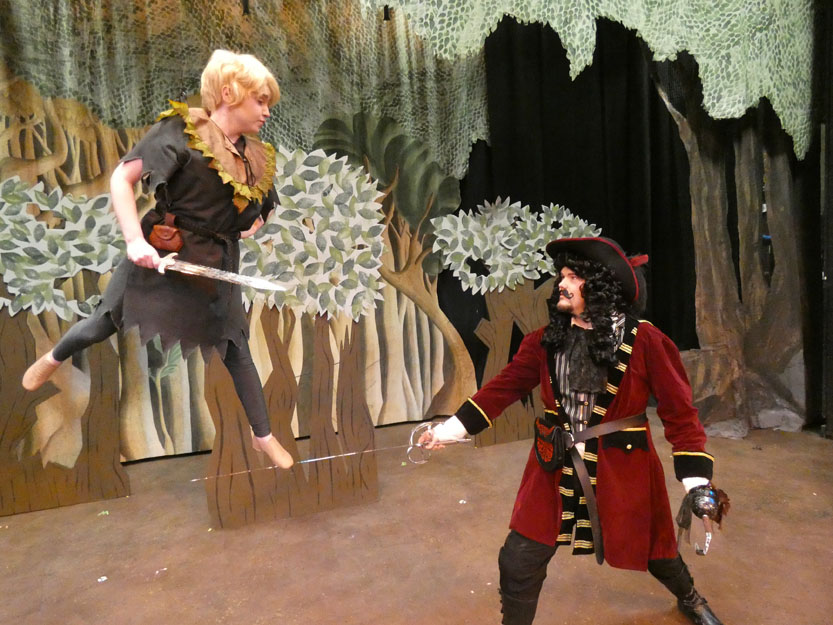 There are lines and blocking to learn and the anxiety that comes from performing in front of a live audience.

Several cast members in Kent State University at Trumbull Summer Stock’s musical have an additional obstacle — doing all of those things while “flying” across the stage.

“Peter Pan” opens tonight for an eight-performance run, and the actors have been working for the last two weeks to create the illusion of flight.

Sierra Boyle, who plays the title character, admitted, “I had a complete fear of heights before even doing this, but I love this role so much, it’s such a dream role, I knew I had to conquer it in order to do it.”

Getting over the fear came quickly.

“The first time you go up, the fear is gone,” she said. “You know you have a team with you that is going to keep you up, hopefully. As long as you have that trust, the fear goes completely away.”

In addition to regular evening rehearsals, the “flying actors” and their teams have spent up to four hours in afternoon sessions to get comfortable and proficient with the equipment. Director Melanie Lucas said they are working with Bill Auld from Kent State University at Tuscarawas, who previously worked for Flying by Foy, the preeminent company when it comes to theatrical flight.

Because of liability issues, the flying actors were encouraged to have family members work with them on their team. Boyle’s father, James, is operating her rigging system.

“He’s always been there,” she said. “He’s always supported me 100 percent. I knew he would be the one to do this. He’s not a theater guy, but he came in here fully confident to learn this, learn a new system. Without them, this would be nothing. They’re such a blessing to have.”

Elora Davis, who plays John Darling, described herself as a thrillseeker and didn’t have the same apprehensions as Boyle. However, that doesn’t mean it’s always fun.

“If your harness is right, it’s fun,” Davis said. “If it’s not right — ‘I need to get down’ … There are two pads that support us. If those pads are flipped out or too far back or too far up, it’s gonna hurt. You can ask to go down, but I think it’s a sense of pride for us. You don’t want to ask.”

Boyle added, “There are times when we can look like we’re having the best time of our lives, but we’re chaffing so bad and it’s going up my butt. I can’t function right now, but we just have to sell it. love it.”

Those flying actors created some additional challenges for Lucas. She couldn’t block certain scenes until she knew how the system would work and what the actors would be able to do on stage.

“Until Bill came, I didn’t know how some things were going to work,” Lucas said. “I knew there will be something awesome here, but I wasn’t sure what it would be.”

“Peter Pan” wasn’t the original plan for the summer stock musical. Kent-Trumbull Theater Artistic Director Eric Kildow wanted to do a classic musical, and he and Lucas settled on “Fiddler on the Roof.” However, a national tour made the rights unavailable.

With its roles for children, “It’s a good musical for Summer Stock, and it isn’t done that often,” Lucas said.

It’s also one of the director’s favorite musicals.

“I grew up loving ‘Peter Pan’ with Mary Martin,” she said. “It may be the first musical my parents really introduced me to. I used to watch it every day on a VHS tape and would act it out.”

The musical version was written by Mark Charlap, Jules Styne, Carolyn Leigh, Betty Comden and Adolph Green, and is based on J.M. Barrie’s play about the Darling children — Wendy, John and Michael — who are introduce to a magical fairy (Tinker Bell) and a boy who won’t grow up (Peter Pan) and transported to Never Land and its world of pirates and Indians.