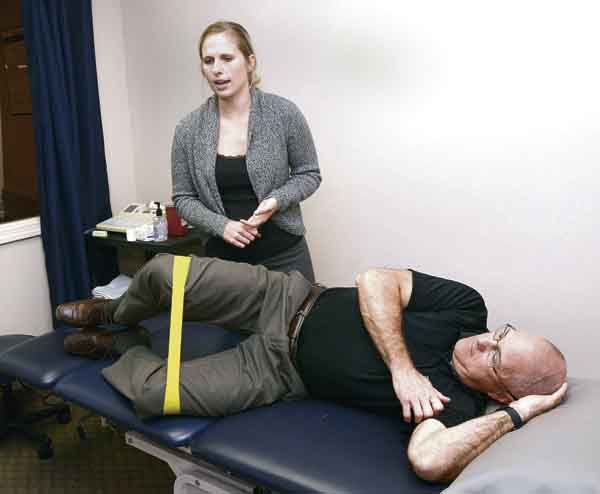 HOWLAND — Julie Landis, 34, an insurance producer from Howland, wanted to stop running to the bathroom so often. She said the urges had grown so frequent that she made an appointment with an urologist to find out if something drastic was wrong.

The pelvic floor is the group of muscles in the bottom of the pelvic area under the rectum or vagina that helps control the bladder, uterus or prostate, and rectum. It’s one of the four core muscle groups — but not one people tend to think about. A weak pelvic floor is one of the major causes of incontinence issues.

Landis said she was put on a regimen that included lying on her side with a resistance band around both legs and stretching against it to strengthen her inner abdominals. The exercises worked.

“I think it’s really beneficial. I don’t think it’s anything to be embarrassed about at all,” she said. “If it affects your life, why don’t you do something about it?”

Dr. Riana Taktikos of Eschman Physical Therapy in Howland said it’s an all-too-common misconception that there’s nothing women can do about moments of incontinence.

“They’ll report low back pain but not that they leak,” the doctor of physical therapy said. “(They’ll say,) ‘I have three kids. What do you expect?’

“It doesn’t have to be normal,” Taktikos said.

Since arriving in Howland about a year ago, Taktikos said she has been trying to educate the Mahoning Valley about pelvic floor therapy as a way to address incontinence and pain. The official estimates are that 25 percent of women and 10 percent of men have pelvic floor issues.

Taktikos said she believes the percentages are higher because many people are too embarrassed to report having incontinence problems. They don’t realize the problems often can be addressed with therapy, she said.

“It’s embarrassing, but I find people are so thankful when they are treated,” she said.

A weak or dysfunctioning pelvic floor can cause incontinence or pain, she said. The pelvic floor often gets stretched out in women during pregnancy or in men after the prostate is removed.

While some pelvic floor conditions may require surgery to correct, a great deal can be addressed first by targeted stretches, the specific strengthening exercises, Taktikos said.

Patients first answer a questionnaire and have a face-to-face discussion about their history and issues, she said. Then external and internal assessments of the pelvic floor region are conducted and core muscle groups examined. Then individual treatment plans are constructed.

“Depending on what I find, I have them do either stretches or strengthening exercises — or sometimes a combination of both.”

The workouts go beyond simple Kegel exercises. Besides, she said, “up to 45 percent of women don’t do Kegels correctly.”

Taktikos earned her doctorate in physical therapy in 2018 from Cleveland State University. Her training included work at the Herman & Wallace Pelvic Rehabilitation Institute and University Hospitals. Last year, she joined Eschman Physical Therapy in Warren with hopes of eventually creating her own pelvic health clinic to treat patients with pelvic floor dysfunction.

Dr. Joe Eschman said he welcomed the addition to his practice on North Road NE.

“Women who are pregnant would benefit from a few stretches,” Eschman said. It would make recovery after birth less painful, he said. There also are exercises that will make labor easier.

The going is slow. While pelvic floor therapists in the Cleveland area have waiting lists of up to three months, the idea of pelvic floor therapy remains relatively new and not talked about in the Mahoning Valley, Taktikos said. She spends much of her time going to various community groups to explain what the therapy is and how it works.

Landis said she had no clue what pelvic floor therapy was before her urologist recommended it. Now she recommends it, too, as a great relief.

Working hard on the farm while everyone is at home

Today was such a beautiful sunny day with the temperature around 60 degrees. Everyone is home due to the ...