Couple works to restore, and modernize, Kinsman Town Hall to create a market

Couple works to restore, and modernize, Kinsman Town Hall to create a market 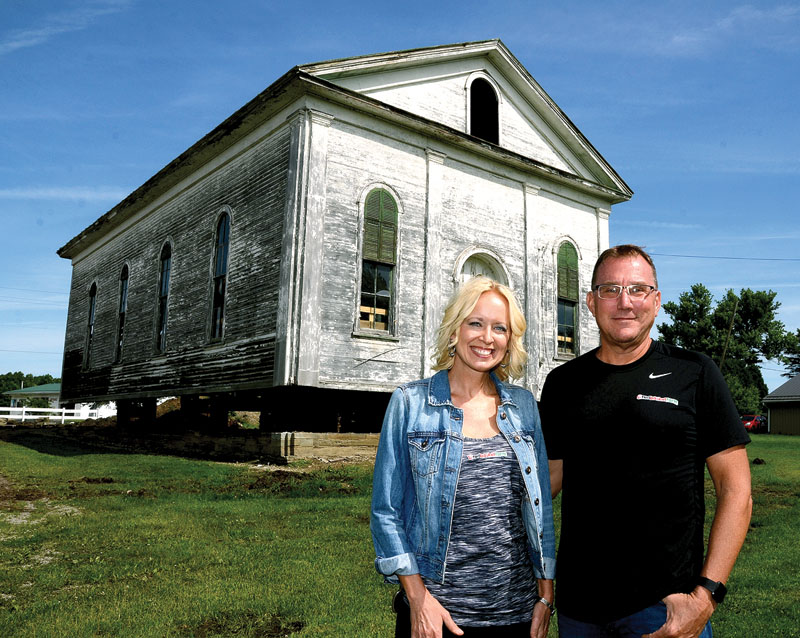 Amy and Floyd Davis of Kinsman, owners of Red Basket Farm, will operate a farm-to-table cafe next spring in the old Kinsman Town Hall when the 1874 building is restored. (Tribune Chronicle / R. Michael Semple)

KINSMAN — He’s a lifelong farmer and a local history buff.

She’s a marketing and business management expert who grew up in the heart of the city.

Now Floyd and Amy Davis, owners of Red Basket Farm, are combining their passions and experiences for their latest venture — building a market and cafe featuring local produce and baked goods inside the nearly 150-year-old former Kinsman Town Hall.

“The outside will be restored to its original character. Inside will be modern,” Amy Davis, 48, said.

It will open in spring 2020 as Good Intentions Market and Cafe.

“One of the things we are passionate about is people being intentional with the way they eat,” Amy said. “Nutritiously dense produce — that’s our focus.”

The restaurant and coffee shop portion of the market will be what Floyd calls a farm-gate cafe “because we grow most of what will be used. It really will be farm-to-table.”

Their own Red Basket Farm will provide much of the fruits and vegetables needed for the menu items; other local farms will be tapped as well.

“We’ve been on the produce side a long time. We already partner with local farms. We’ll just expand on that,” he said.

“We have good intentions for the community,” Amy said.

The 40-foot-by-70-foot wood frame building at the corner of Kinsman Road NE and state Route 7, north of Kinsman Square, has a two-story height but only one floor. Plans are to build a mezzanine level.

Actually, there’s no floor at the moment. The shell sits more than three feet off the ground on a series of block platforms while its original stone foundation is refurbished.

The inside of the building shell is reinforced with a skeleton of temporary beams and trusses to keep it from collapsing while suspended. The outside is weathered-gray wood, with remains of peeling white paint and a few cracked windows.

The town hall was built in 1874, nine years after the Civil War ended. “Then it had many different lives,” said Dick Thompson, owner of neighboring Heritage Hill Farm. He bought the old town hall 30-some years ago when it was a used car lot.

“It was an eyesore. We bought it with the idea of trying to find a purpose for it. It took us a long time,” Thompson said. “We were quite pleased to partner with the Red Basket. It can have a new purpose.”

“We think this is the character of Kinsman, the fabric of Kinsman,” Thompson said. “We see this as an available treasure. Not too many people can use a town hall.”

It is costing “a lot of money” to restore the building, Thompson said. He wouldn’t say how much was being invested, just that “it will be a significant number to bring it back, to bring it up to code.”

Mike Fisher of Fowler, a contractor with Gilmore Design of Cortland, said the long, tedious process of raising the town hall began June 2. It was lifted a few inches at a time with coordinated hydraulic jacks under a lattice of iron beams supporting the structure. At every stop, another layer of wooden blocks was added to platforms beneath the beams.

Next, the foundation was taken apart stone by stone and stacked on skids according to their location. After a new footer is dug and poured, the stone foundation is being rebuilt.

Thompson said the town hall should be ready to lower onto the new foundation within two weeks. Then interior renovations begin.

The Davises tried to make a go of various other types of farming.

“I raised beef. I used to raise corn and soybeans. I had hay,” said Floyd, whose family settled in Gustavus in 1820. He grew up in Hartford.

Then came the breakthrough.

“We joke about how it was kind of a happy accident — right place at the right time,” he said. “We got involved with the local food scene in Cleveland in 2009, 2010, when it was starting.”

Amy, who grew up in Warren near Packard Music Hall, said, “I’ve done sales (and management) my whole life,” including for a local bridal salon and a local photography studio. Now she does so for their own burgeoning business.

Their Red Basket Farm at 6311 Mayburn Barclay Road, south of Kinsman center, has 15 acres of outdoor production and 20,000 square feet of greenhouse space. They bill it as “extended season, natural farming.”

Earlier this month, a fair amount of open space remained in the fields full of peppers, broccoli, cabbage, lettuce and other produce.

“Because of the weather, we’re behind,” Floyd said. “We have 55,000 plants that need to go in.” That’s where the greenhouse comes in handy.

They plant crops in staggered blocks so there will be different harvest times. “Once we make something available, we make it available as long as we can,” he said.

They’ve been produce farming for 10 years, selling primarily to restaurants and schools. But people kept stopping at the farm, hoping to buy fresh vegetables. People are changing they way they eat, Floyd said. There’s a renewed interest in healthy eating and fresh products.

“We have almost 200 people signed up for weekly produce from us,” he said. “It’s a waiting list. The demand for this is growing all the time.”

The Davises set up a make-shift market out of their carport. Over the last four years, they looked for a retail location.

“We looked at other historical buildings in town,” Floyd said. They also looked at sites in other communities. When they found out Thompson would work with them to renovate the old town hall, the vision took off.

“We were better known in Cleveland than in Kinsman — and that’s about to change,” Floyd said.

Supposedly most schools in Mahoning and Trumbull counties — and schools throughout the entire country — just ...