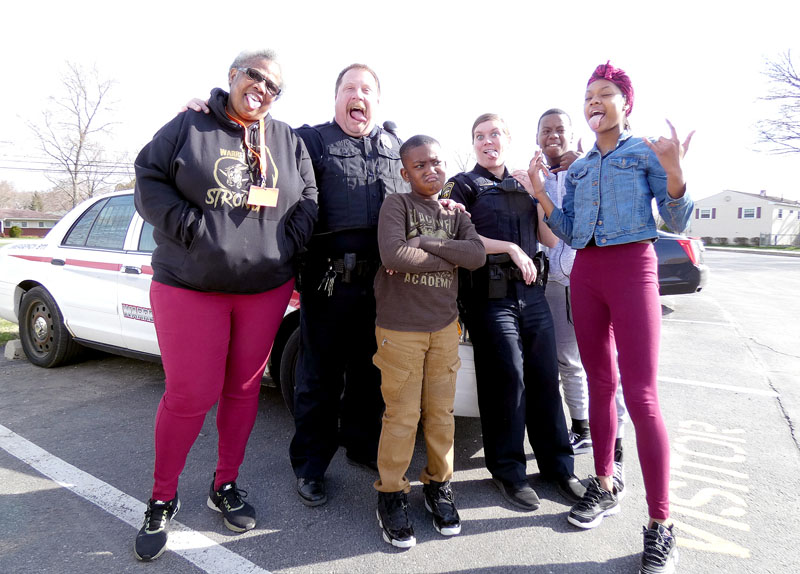 “She ran from me,” Coulter said.

Gia, now 14 and in the eighth grade at McGuffey PK-8 School, ducked her head and giggled at the awkward recollection of two years earlier.

Coulter, her eyes sparkling a mixture of merriment and amazement, said, “I had to chase her down a road and through a backyard. I caught her as she was climbing over a fence. I had to take her back to school in the patrol car.”

Coulter shook her head. “I thought, ‘This isn’t going to work.'”

She didn’t quit. Likewise, Gia gave the pairing with a police officer a chance — and found she had a caring confidant.

“I don’t have a sister that lives down here, so I would not have anyone to talk to,” said Gia, whose two blood sisters live in Georgia. “We do a lot of stuff. We got our nails done together. We go out to eat a lot of times.”

“Gia and I, we took it slow. We got to know each other. She’s so talented athletically and artistically. I’m so glad I stuck it out. I love Gia and I consider her like having one of my own.”

“He knew this was near and dear to my heart. My husband is a police officer (in Youngstown),” Welch said. “Mr. Chiaro asked me to take this on because there was not such a program in Warren or in Trumbull County. I said I’d be honored.”

Big Brothers Big Sisters of America said it launched Bigs in Blue in 2016 as “a one-to-one mentoring program that connects youth with police in communities throughout our nation, building strong, trusting, lasting relationships. These relationships can help children develop into confident adults and help build stronger bonds between law enforcement and the families they serve.”

Since 1904, the national organization has paired adult mentors from all walks of life with children who generally are missing one or both parents, and who have strong family support for the program.

She chose three students from various grade levels who she thought would make a great connection. She paired Gia (“strong with a big heart”) with Coulter; Gia’s brother G (“a people person and smart”), now 13 and in seventh grade, with Dina; and Jamari Cayson (“witty and funny”), 10, fourth grade, with Currington.

“The mentorship has now turned into a great relationship, not only with the officer and the child, but with their families,” Welch said. “Not a one-and-done thing — I wanted this to last forever.”

“It’s been great,” G said. “It was kind of scary at first. Now it’s a way for me to escape my life. … He started coming here (to school). He goes to my football games. Sometimes we just sit down and talk. He’s like a brother.”

“This came at the right time because they lost both their mom and their dad,” Jones May said of the siblings. “They needed someone.”

The school district, Big Brothers Big Sisters and the police department all would like to expand the program, Welch said.

“But in a way, it already has,” she said. “There are a lot of other kids who are now interested. They say, ‘Why can’t I have someone come around and love on me and spoil me?’ It has spread awareness that there is a positive relationship between the police and the community.”

“I did 10 years in the detective bureau and I did all the child crime (cases before become a school resource officer),” Currington said. “When Mrs. Welch asked me to do it, it was my pleasure. I’m juvenile and immature, according to my wife, so I fit right in.”

Jamari said, “It’s really fun to have a big brother. Whenever I get in trouble, he helps me through it so I won’t get in trouble anymore. He says he loves me. I never really had a brother until now.”

“I really enjoy the Cayson family,” Currington said. “We always have a good time. It’s something positive. It’s that interaction with them — the aunt and Jamari — it’s a true team effort to help everybody out.”

Tonya Cayson, Jamari’s great-great-aunt and guardian, said, “I enjoy the program.” Currington’s no longer another cop on the street but an embraced family member, she said.

The program is designed to be active during school hours only, but all three officers have gone way beyond that, Welch said.

“Leona and her husband are so supportive,” Coulter said. “They let us stop by the home when we want or let us take the kids with us — just letting us be a part of their lives. I appreciate it.”

The mentors benefit from life lessons, too.

But he could tell from the look of disgust on Jamari’s face that while full-grown “juvenile and immature” men might love it, 10-year-old boys need something more challenging.

“Our next adventure is to Tilt,” Currington said.

“Jamari is so fun. Fun and funny,” Currington said. “He really has the potential to go far. I am so proud of him.”

All three students are looking to go into law. Gia said she plans to study for a career as a lawyer. G and Jamari both want to become police officers.

Coulter said the program is helping change perspectives on who police officers are. “People are usually calling the police because something traumatic is happening, not to say, ‘Hey, let’s go to lunch,'” she said.

“The police are there for more than to arrest people,” Jones May said.

G said, “One of my favorite things is the police station” — with his Big Brother.

It was 72 years ago, the late winter of 1948. What I remember about the beginning of that year was the cloudy, ...

SCHOOL RETIREES TO MEET: Howland Schools Retirees will meet for lunch and a brief meeting 11 a.m. March 3 at ...

A cool day for a pot of chili

It’s amazing how another week has already gone by, and it’s time for me to pen another column. Son Kevin, 14, ...