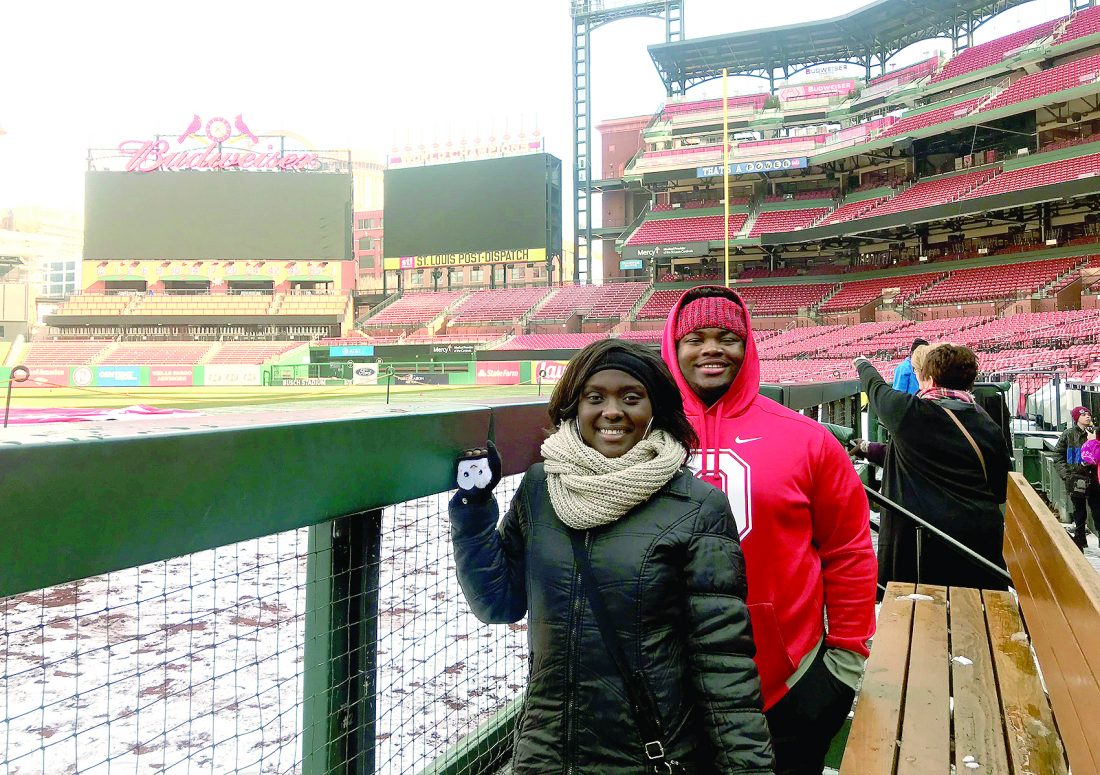 Warren G. Harding High School junior Precious Ball, left, and WGH senior Simahjay Warfield visit Busch Stadium during their trip to St. Louis. They were two of the first four students nationally to be invited to present at a panel discussion at the Collaborative for Academic, Social and Emotional Learning's annual Equity Work Group meeting. (Photo special to the Tribune Chronicle)

Precious Ball, a junior, and Simahjay Warfield, a senior, were on a panel with two students from Minnesota to discuss building stronger relationships among students and teachers. They also told educators about monthly schoolwide roundtable discussions, an innovation that Harding is trying and that other schools are interested in following.

“It was the first time students were invited to speak at the conference,” said Jill Merolla, Warren City Schools supervisor of community outreach and district lead for social and emotional learning.

“We can talk about students all we want,” but it’s not the same as hearing the perspective of the students in their own voice, she said.

“They did an excellent job,” Head Principal Dante Capers said. “I felt like they were very genuine, reflective. They represented the best of what Warren has to offer.”

Warfield, a senior — a leader of his church’s youth group and a volunteer mentor for the Kids’ Club at Trumbull Family Fitness who will study communications at Lake Erie College on a football scholarship — said the conference brought “a panel of students together to give the adults a perspective on how we relate to teachers and how it can be better.”

Ball — president of the youth chapter of the NAACP and a member of the Kent State University Upward Bound program who intends to go to law school and eventually become a judge — said, “Listening to the other kids on the panel as well, it opened my eyes to the opportunities we have. Other schools didn’t have the experience of a roundtable. Our school does try.”

That’s where Harding’s roundtable discussions come in. Starting this year, each teacher, administrator and guidance counselor meets with eight to 12 students to share their thoughts about pressing concerns, such as bullying, respect and harassment, Janis Ulicny, a Harding assistant principal, said.

Ulicny said the student groups are a mixture of ages, backgrounds, academics and extracurricular interests.

“It’s a whole-gamut melting pot in one room,” she said. “In my group, I have a senior boy and a freshman boy. They never would have crossed paths. Now they talk.”

“The roundtable is a place to talk honestly without criticism,” Ball said. “We’re trying to present ways to get to the child who is not engaged as much to connect too.”

“It’s legit,” Warfield said. “It’s a place where teachers and students can connect on a different level.”

Teachers can get a better feel for what students are seeing and feeling, and students gain a perspective on what a teacher’s life is like, he said.

“Me, I’m going to get the work done, but I’ll work harder because I feel like she knows me instead of, ‘Just do this assignment,'” said Warfield, who maintains a 3.5 grade-point average while taking honors and College Credit-Plus courses.

Harding students were invited to the conference in St. Louis with Capers, Merolla and Ulicny — all Harding grads themselves — primarily because of the roundtable concept. “They were very interested,” Merolla said.

Capers said hearing the voice of students is important to knowing how to best to reach students in light of a fast-changing world. Everything from the idling of the General Motors plant in Lordstown to the opioid epidemic happening outside the school walls affects the mindset and academic performance of the students, he said.

“For us not to expect it to have an impact would be foolish,” he said. “SEL is about adjusting to changing needs.”

Ball’s advice on improving the student-teacher relationship: “It’s when a teacher is fair, consistent with all the rules to all kids. Basically, being fair all around. It’s balancing the academic while understanding the child has a life outside of school.”

Warfield said that personally, he has no trouble with his teachers. “I can go to any of my teachers for help.” And students know that if a teacher appears to be having a bad day, they can show their concern to them.

As for the roundtable, “It was good to know that people were actually listening,” Warfield said. “Afterward, people would come up to me and say, ‘I never knew you felt that way.'”

Ball and Warfield both said the St. Louis trip was their first time on an airplane. There wasn’t much time for touring, but they did get a quick visit to Busch Stadium, home of the St. Louis Cardinals baseball team. Ball said she even worked up the courage to go to the top of the St. Louis arch.

“I wasn’t going to do it, but I would have been mad later if I knew I had gone all the way to St. Louis and not done it.”

“I feel like something like that (conference) should come to Warren. Host it here, so people can come to our home and talk to us and we talk to them and everybody can see differences,” he said.

Ball said of the trip, “I think it inspired a lot of kids to try to be noticed, to try to get more active or more involved. It lets them know your voice matters — but you have to want to be heard.”

Sherri Mamounis, 56, of Youngstown, gets paid to be the live-in caretaker for her twin sister, Sheryl Lasky, who ...

July is a busy month