Top prize still up for grabs, it’s any team’s game 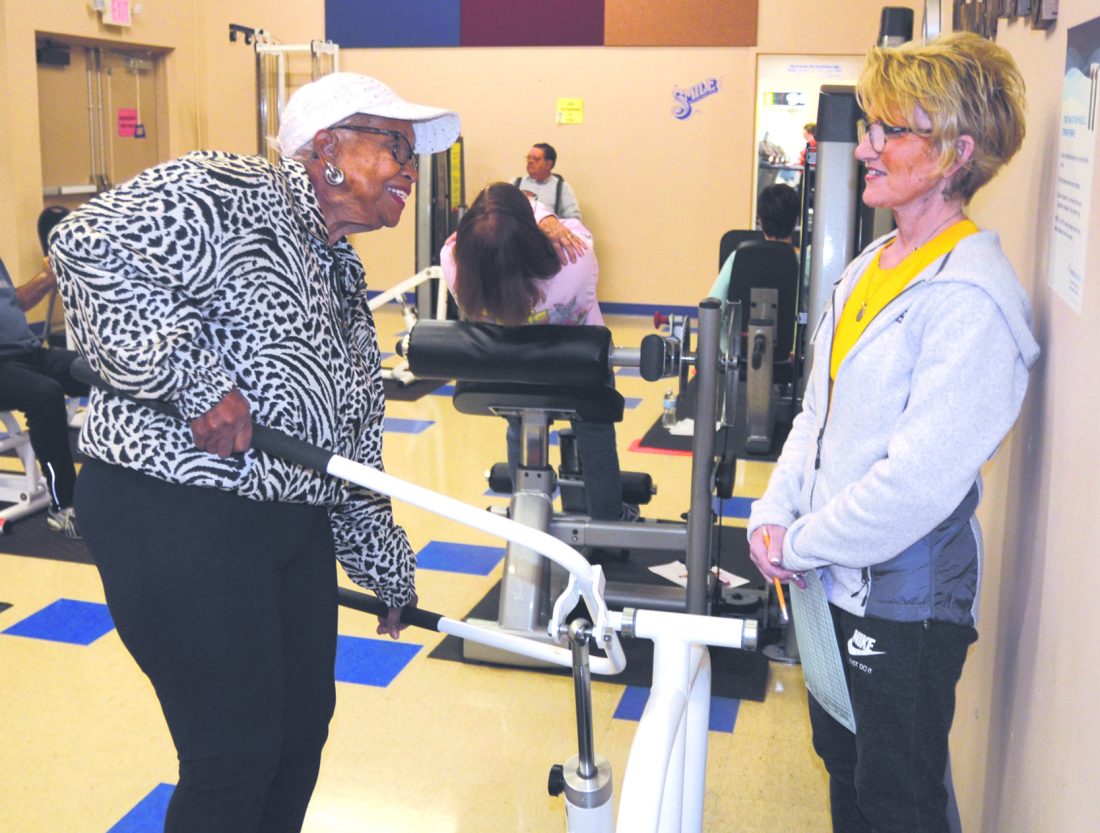 Alma Currie of Warren, left, a member of the God's Busy Bees Fitness Challenge team, works out at St. Joe's at the Mall under the watchful eye of instructor Lana Eddy-Campfield. (Tribune Chronicle / R. Michael Semple)

The names at the top — the Big Dogs and Just Weight — look familiar at halftime in the 2019 Tribune Chronicle / Mercy Health Fitness Challenge community weight loss competition to benefit charity.

But neither the Dogs nor Just Weight has been leader of their pack all the way through, and neither team holds a comfortable advantage now.

“Wow, halfway through. It’s definitely time to intensify,” Michele Garman of Because We Can 2 said. “It’s getting harder to take off the pounds and Valentine’s candy is everywhere.

“Still making sure to count those calories, watch those portions and stay away from the carbs,” she said. “Also, making sure to make it to Cardio Jam every Monday, Wednesday and Friday at St. Joe’s in the Eastwood Mall — because we can! Got the treadmill cleaned up and running for the rest of the week.”

Overall, the 120 players on the 24 Fitness Challenge now have shimmied, shook and smartly snacked their way out of 1,349.5 total pounds over the first four weeks of play. That’s a few ounces shy of 5 percent of our starting weight no longer threatening to pop our buttons.

There are four weeks and plenty of time for any team in either the Go-Getters or the veteran’s Dynamos division to take a load of the scales and collect the fat $775 top prize for the nonprofit groups of their choice. All teams will donate at least $225 to their charity.

It would also help if some of the front-runners slowed down a bit, Garman mused.

“I think the guys at Mathews High School (the Thinning the Herd team) need some doughnuts,” she said. “Maybe I’ll bring some by…”

After four weeks, The Big Dogs still have their jaws clamped on pant leg of first place in the Go-Getters division. The Dogs have lost 8.5 percent of their starting weight.

“It’s not much of one but it’s a lead,” Glenn “Big Dog” McClellan said. “I was thinking about inviting them to an all-you-can-eat buffet, on us.”

Last week, the Dogs and Slimpossible were practically tied, 6.77 to 6.73 percent.

The Blubber Busters didn’t have their best week, but still strong enough to keep third place at 5.5 percent, with Arianna’s Hope remaining at fourth for another week at 4.8 percent.

But watch out, the LPJ Lean Machine, in sixth place last week, nudged into fifth at 4.79 percent.

McClellan said one of the secrets for the Dogs was visiting the Trumbull County Dog Pound. Their prize money will go to Voices of the Trumbull Pound Dogs, a group of volunteers who work to help the dogs at the pound find and keep homes.

“Toni Libbey, Tonya Shelko, Joanne Snyder — those three ladies we met at the Trumbull County pound, they are the Voices of the Pound. They were wonderful,” McClellan said. “It kind of gave us a little fire in our bellies to try to help them out the best we can.

“We’re just continuing to stay working hard,” he said. And taking advice from teammate Dave “Soup” Campbell, the only Fitness Challenge veteran on their team. “He keeps us upbeat and moving forward.”

DISH ON THE DYNAMOS

The juggling act continues in the top three spots of the Dynamos Division.

This week, Just Weight decisively reclaimed first place at 9.3 percent, knocking The Slimsons back into second at 8.7 percent.

Thinning the Herd, which had been in second place the first two weeks, kept third place at 8.3 percent.

“We will continue to do the best we can and see where it takes us,” Miller said after his team slipped into second.

Where it took them was back to the top — for now. There are still four weeks to go and the lead for the Dynamos keeps on changing.

The team with best single-week performance each week earns a bonus $10 for their designated charities.

The caveat is that all five members must weigh in at both ends of the week — no laying back for a couple of weeks, then showing up with a three-week loss disguised as one.

This week, the teams of the week are the Big Dogs for the Go-Getters, chomping off 1.87 percent of their weight over the previous seven days, closely trailed by Mission Slimpossible at 1.47 percent; and for the Dynamos, Just Weight, with a 1.23 percent single-week performance.

That’s the second week in a row and third out of four weeks that Just Weight has pulled off a Team of the Week showing, interrupted only by The Slimsons in Week 2.

It was the second time that the Big Dogs scored Team of the Week. The honor belonged to Mission Slimpossible in Week 1 and the Blubber Busters in Week 3.

The Big Dogs became the first Fitness Challenge team this year to cross the century mark. The team has lost almost 109 pounds in four weeks.

Three other teams are in the 90-pound range: The Slimsons at 99.5 pounds; Thinning the Herd at 97pounds; and Mission Slimpossible at 94.5 pounds.

Or course, the Challenge is based on percentage of starting weight lost, not total pounds, which is why Just Weight, which leads the Dynamos division after dropping a “mere” 88 pounds or so.

Last week, two of the 24 teams GAINED weight and another broke even in the weight LOSS competition.

This week, only one team slipped. The Flash Mob gained three pounds — but they’re still down more than 30 overall.

Speaking of the Flash Mob…

The Flash Mob is eating less so that less fortunate students will be able to eat more.

The Mob, all employees of Kent State University at Trumbull, are playing for the Flashes Food Pantry — which doesn’t exist just yet.

The institution is working through Second Harvest Food Bank to establish the pantry as soon as this fall, he said. The pantry would be available for students enrolled at the regional campus of Kent State in Champion.

“There’s absolutely a need,” team member and campus dean Dr. Lance Grahn said. “Virtually every high school in Trumbull County has their own food pantry. Food insecurity is increasing for students through the region and the country.”

How do the Fitness Challenge teams come up with those inventive names?

This week, Shirley Lisk explains why two teams based out of St. Joe’s at the Mall are named Because We Can (1 and 2).

“This is our motto at St. Joe’s at the Mall,” Lisk said. “Why do we come to exercise and take good care of ourselves? Because we can!

“Because We can came from one of our participants in our Monday-Wednesday-Friday Cardio Jam at 8:30 a.m.,” she said. “When asked why you all come out every Monday, Wednesday and Friday at 8:30 a.m. in all kinds of weather, she replied, ‘Because we can!'”

The phrase stuck, both as a motto and as a team name.

Looking back at a simple morning in 1939

FIBROMYALGIA SUPPORT: The Chronic Fatigue and Fibromyalgia Support Group will meet 2 p.m. Jan. 20 at the First ...