Warren man sheds half his weight after heart scare 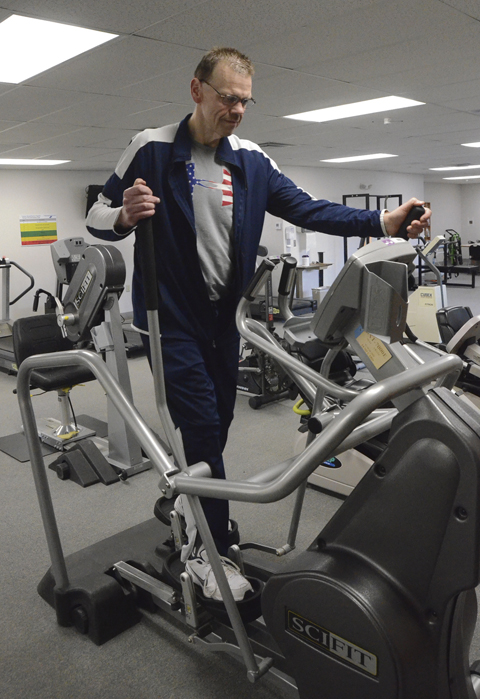 Editor’s note: This is the third in a series of stories running on Tuesdays in February of local residents sharing their heart stories for American Heart Month.

Not only has the massive weight loss improved his heart function, McClellan has celebrated a number of other health benefits.

“I was maxed out on all of my oral medications for diabetes. I take none now. I was on blood pressure medication. I’m off that. I do take a cholesterol pill but my numbers are good. I might not need that,” he said. “I made a total life change. I was going down the wrong road, the doctor said.”

The journey began when McClellan, a shop coordinator at AML Industries — a metalforming lubricants and coatings manufacturer in Warren — ran into a friend at the grocery story.

“He had triple bypass surgery and he was telling me some of the symptoms. I said, ‘Man, I have some of those symptoms.'”

When McClellan had tried to help his son fix up a house, dizziness and shortness of breath limited him to 10 or 15 minutes before taking yet another break. “I thought it was because I was heavy and out of shape,” he said.

He made an appointment with his family doctor, underwent a stress test and ultimately was diagnosed with a 90 percent blockage in one artery and a 50 percent blockage in another. A stent was put in to open up the major blockage. The lesser blockage was treated with blood-thinning medication and modification of lifestyle.

While recovering from the heart catheterization to place the stent, McClellan was visited by Matt Halula, the clinical exercise physiologist at the Trumbull Regional Medical Center Cardiac Rehabilitation Program. At first, McClellan wasn’t buying whatever this guy was selling. But the more Halula talked about the exercise, nutrition and education the program offered that could save his life, the more McClellan listened.

“He started talking about cardio rehab. He got me excited,” McClellan said.

McClellan powered through all 36 sessions of exercise over 13 weeks. On his last day, he wore a T-shirt his wife had made for him that proclaimed: “I survived cardio rehab.”

Then he joined Global Health and Fitness gym on Elm Road in Warren — and almost gave up after two months.

“I was doing biceps and it was too much,” he said. “I was sitting there. I was so frustrated. I’m like, ‘I’m quitting. I’m going to get up and get out of here.’

“This lady walks over — I didn’t know her — she leaned over and said, ‘Glenn, you’re doing good, you’re looking good. Keep up the good work.'”

If others were seeing results, maybe the workouts were doing some good. McClellan stuck it out.

“The next week, I thanked her. After that, a lot of people came up and encouraged me. I thank this lady quite often.”

He works out seven days per week, if not at the gym, then pedaling 10 to 15 miles on his bicycle three times per week in the summer or walking up to nine miles two or three times a week.

“I’m obsessed, I admit it,” he said. “My main motivation is the fear of gaining it back.”

McClellan said he had been active in high school, playing football, basketball and baseball. He kept playing sports after graduation. But after he married and his family began to grow, time for sports dropped away.

“The last thing I quit was bowling,” he said. “I broke both feet sometime when I was heavy.”

His weight went up, depression set in, and he ate more to work past the depression.

Since his heart procedure and weight loss, the Big Dog has reclaimed his lawn.

“For a few years, my wife cut the lawn. Now I’m back. Now I consider it my yard.” Plus, he tends his mother’s yard as well.

“Last summer, I told Mom I’d fix her garage. I worked on that all summer. All that stuff I’d never been able to do. I’m constantly on the go. I hardly ever sit still anymore.”

And like the lady at the gym did for him, McClellan said he likes to encourage others to succeed in their own health journeys. If one is exhibiting heart issue symptoms — such as chest pressure, fatigue, nausea, dizziness, shortness of breath, neck or jaw pain, and a sense of doom — get it checked out, he said. And get on board with a better lifestyle to keep the heart happy.

Lovina remembers a time before toilet paper was available

It’s a rainy Wednesday evening here in Michigan — a week before you are reading this. Supper is over and the ...