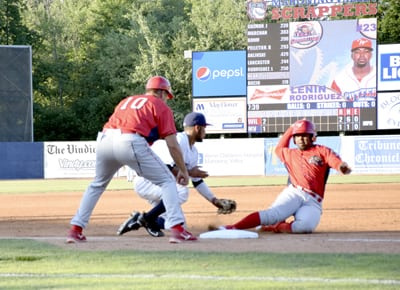 The Mahoning Valley second baseman was too quick for Guzman to recover and throw to first base. Ric Flair’s trademark “woooo” pops over the speakers at Eastwood Field.

Men at first and second. One out.

The 2,394 at Eastwood Field were treated to another “woooo” over the speakers, the sound of the legendary professional wrestler. 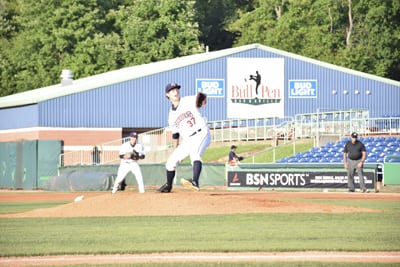 Looked like a rally as Mahoning Valley trailed by two runs.

Hosea Nelson didn’t want to be a killjoy.

He put his best finishing move on Williamsport starter Gustavo Armas. Nelson crushed an 0-1 change-up, which was left a little bit up, over the right-field wall — giving Mahoning Valley a one-run cushion in what eventually became a 6-3 victory Monday at Eastwood Field. It was Nelson’s first home run this season.

Those wooos were about to get louder as Simeon Lucas’ double scored Clark Scolamiero. A four-run inning for the Scrappers put away the Crosscutters (9-14) as Mahoning Valley (16-7) won for the fourth time in its last six games.

“I was trying to do my part and it worked out perfectly,” Nelson said.

Williamsport tried to recoup its advantage.

Alec Bohm took a shot on a sidearm pitch from Scrappers reliever Randy Valladares in the top of the eighth inning. The hit to Bohm was so hard he was writhing in pain on the ground. He had to be helped off the field as he limped toward the third-base dugout.

Seth Lancaster hit it hard, but his bat split — resulting in a ground out to shortstop.

Scolamiero’s double to right fielder scored Angel Lopez added one more run in the bottom of the eighth inning.

Scrappers starter Cameron Mingo was lifted for reliever Adoni Kery with one out in the fourth inning, leaving runners on first and second. Kery, who earned the win, got out of the inning with two fly outs. He went three 3 1/3 innings, giving up two hits and striking out three.

Mahoning Valley lost its first series against Batavia on Friday, but rebounded to win this one against the Crosscutters.

Nelson, he’s trying to get better, even preparing after going 0 for 4 on Sunday — going out early Monday to hone his skills.

“It’s all focused on hitting the ball as hard as I can consistently, quality over quantity,” Nelson said.

Wednesday, the Scrappers start at three-game series at Staten Island. First pitch is at 7 p.m.