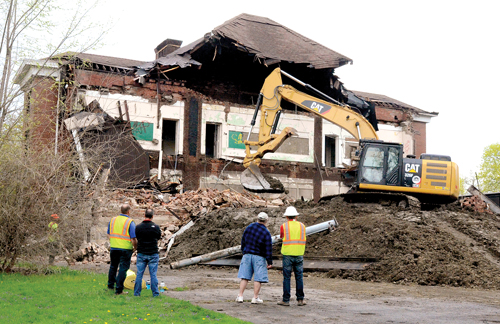 The former Garfield Elementary School, built in 1905, is being demolished by the Trumbull County Engineer’s Office. The demolition is a joint effort among Niles, Trumbull Neighborhood Partnership and the Trumbull County Council of Governments. Tribune Chronicle photos / R. Michael Semple

NILES — Cheryl Cole, who has lived across from Garfield Elementary School for the past 37 years, said she has many memories of the 114-year-old building her two children attended and where she also spent time reading to students in the library.

Cole was among a steady stream of people who watched as demolition began Tuesday on the school located off West Third Street.

Cole, of Eliza Street, said her son, Jeff, and daughter, Candy, attended the school from kindergarten to sixth grade and she was one of the classroom moms who helped with holiday parties and other events.

“I have a lot of good memories of that school. I remember the stairwells,” Cole said of the times she would read books to the children in the library or watch them on the playground.

“The teachers there were really great with the children,” she said.

Cole said although it was hard to see the school being taken down, it was aging and had problems.

Retired teacher Sandy Bilovesky, who taught third grade and worked at the school for 27 years, said she had many wonderful memories teaching at the building on the city’s south side.

“A big part of my teaching career was at the school. The families were great and the children wonderful to have in class. Teaching at the school was like one big family. When I heard demolition was starting, it brought tears to my eyes,” she said.

Bilovesky said the school was older and a different construction style than many others in the district, with the office located on the second floor. Most schools’ offices are on the main floor.

Before its closing, the school had one teacher for each grade level. Bilovesky said she and others connected with the school were hoping to get a brick from the building as a memento.

Niles Mayor Steve Mientkiewicz said the vacant school has been a problem for the southside Niles neighborhood for the past 13 years, with vandalism and people dumping mattresses, garbage, tires and debris at the site.

He said the demolition was necessary because of health concerns and safety hazards, and also said it was “a good step in the right direction to clean up the southside.”

The demolition was made possible through a partnership with the city, Trumbull County Council of Governments and the Trumbull Neighborhood Partnership.

“This is an affordable, once-in-a-lifetime deal to take care of this blighted problem in the city. I talked with some demo companies and it would have cost hundreds of thousands of dollars to demolish. It will cost us $20,000 and save taxpayer dollars. This is the final piece of the puzzle,” Mientkiewicz said at an April Council of Governments meeting held in Howland.

TNP acquired the property through the Trumbull County Land Bank, but TNP cannot legally demolish commercial property. The county engineer’s office, as part of the agreement, provided manpower and equipment, as did the city.

Mientkiewicz said TNP agreed to do the asbestos assessment and abatement of the building. The deed was transferred from TNP to the city.

Mientkiewicz said once the school is torn down, the property will go back to TNP for it to auction.