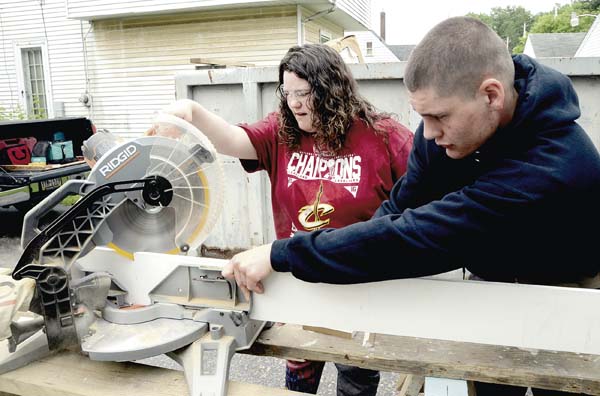 WARREN — Local youth are acquiring construction skills while also completing their GEDs as they spend part of their spring and summer restoring a 1939 home in Warren through Youth Build Trumbull County.

Randy Carnino, construction manager with Youth Build, said the organization was able to acquire a two-story house at 160 Kenmore Ave. SE from the Trumbull County Land Bank for $300.

“The house has sat here vacant for seven years and has been completely renovated with all new heating, cooling and wiring and new cabinets, windows, doors and floors,” he said, estimating $42,000 was put into improving the home.

Carnino said the 1,100-square-foot home was the standard for homes in Warren in the 1940s.

“We give them opportunity to come here and work for minimum wage for three and half hours a day and then they spend the rest of their day working for their GED or attending River Gate High School to get their education,” Carnino said.

LaShonda Allen, program director with Youth Build, said the program started in 1995 when it was founded as the Job Training Initiative.

She said the program helps disadvantaged youth ages of 16 to 24 acquire construction skills, complete a high school education or GED, and receive leadership training while rehabilitating affordable housing for low-income and homeless people in the county.

A benefit of the program is participants gain construction skills on both the inside and outside of the home, which also included a walkway and a deck at the back of the house.

Carnino said when the house is completed, it will be available for sale or rent to low-to moderate income families as a starter home by Trumbull Metropolitan Housing Authority.

A ribbon cutting ceremony will be held in August.

He said Youth Build is looking at another house to fix.

Warren resident Andrew Colbert, who has worked on the house this year, said he and others have done a lot of work on the house.

“There were no walls in the house and I have wanted to learn drywalling. Everyone took turns trying something new and learning different skills working on the house,” said Colbert, who also earned his GED.

He said he handled most of the drywalling and painting

Eric Kenney, construction coordinator for Youth Build, said this is the second house he has worked on in the program

“The last house on Youngstown-Warren Road was a lot more work. It was totally gutted. This house was not as bad as the house we had before,” he said.

Kenney said the Youth Build participants spend part of the day in class and the other part onsite working.

“They are gaining softskills to go out into the workforce,” he said indicating many get certified through the National Center for Construction Education and Research.

Brenden McNemar of Warren said he has learned many skills in construction that will benefit him for future employment.

Carnino said participants gain various math skills such as measuring with tape measure and other tools.

“It is neat when they start to catch on,” he said.