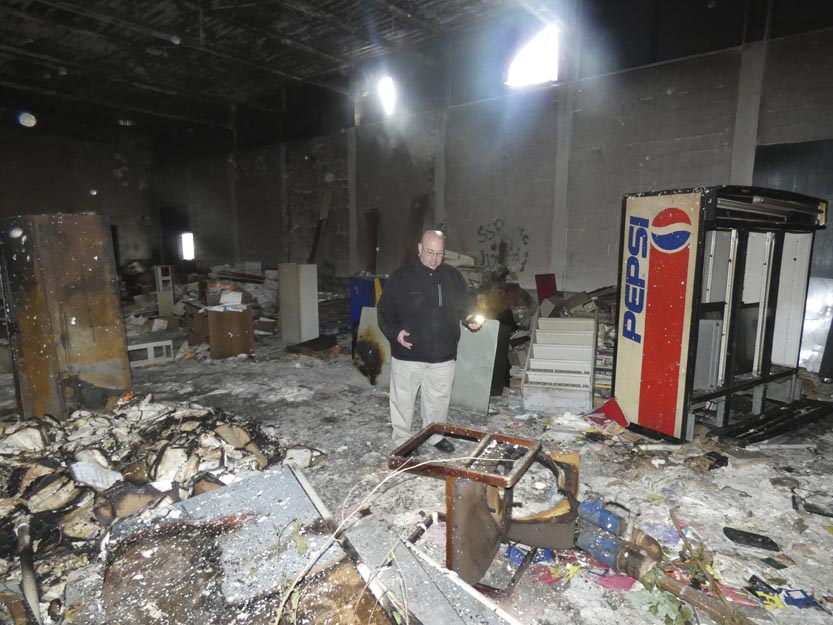 Tribune Chronicle / Jon Wysochanski Barry Steffey, president of Niles Council, stands inside the dilapidated former Garfield Elementary School on Third Street in Niles. The city is in the process of getting asbestos testing on the property in hopes of soon demolishing the building.

NILES — City officials are trying to move forward with demolition of the south side’s biggest example of neighborhood blight.

The former Garfield Elementary School was closed in 2003 and sold to a private investor at auction in 2005. That investor eventually walked away from plans to make the building into offices and stopped paying taxes, according to City Council President Barry Steffey.

The building is a sore spot for the community not only because it is an example of blight, but also because the school district invested hundreds of thousands of dollars into a new roof and windows the year before closing it, Steffey said.

The nearly 100-year-old building that once housed kindergarteners through sixth-graders now has hand-painted murals of “Charlotte’s Web” alongside spray-painted vulgarities.

The cafeteria caught fire in July 2017, and the smell of smoke and water damage still exists alongside reams of water-soaked papers and files. Dark corridors with paint-peeled ceilings and walls show signs that some have sought refuge in the dilapidated building to heat spoons and shoot up heroin.

It’s sad to see the building in such a sorry state of affairs, said Steffey, who lives in the neighborhood and had children who once went to the now-decaying building that sits prone to break-ins.

“This used to be beautiful,” Steffey said. “Teachers waited out front for the kids, and it’s disheartening. This is the front door of the south side and when you turn on Third Street this is what you see.”

Although the previous administration did nothing with the building and was unable to find a way to demolish it, Steffey said he hopes demolishing it and turning the land into a park might become a reality at some point in the near future. The building is a safety hazard to those who still enter it, whether its kids or drug addicts, Steffey said.

“This is what inspired me to go to my first council meeting,” Steffey said. “It was a disservice to the residents to spend money on this building, close it and then leave it to fall into disrepair.”

The first step in trying to demolish the building is to have it tested for asbestos, according to Service Director Ed Stredney.

Jack Simon, who works in the Trumbull County Engineer’s Office and is licensed to perform asbestos inspections, has agreed to take samples on his own time free-of-charge, Stredney said. City Council will have to appropriate $1,500 to have Simon’s samples tested by an independent lab, Stredney said.

“In order for us to try to come up with a plan, we need to know a couple things and one of those is how much asbestos may or may not be in the building,” Stredney said.

Matt Martin, executive director of the Trumbull Neighborhood Partnership, said the Trumbull County Land Bank doesn’t have money for commercial demolition, but they are still willing to work with Niles to find a solution, secure resources and offer advice.

“At the end of the day, it’s going to take some real money to do that demolition,” Martin said. “We’re the ones who went and picked the piece of litter up, and now we’re all trying to find a garbage can for it.”