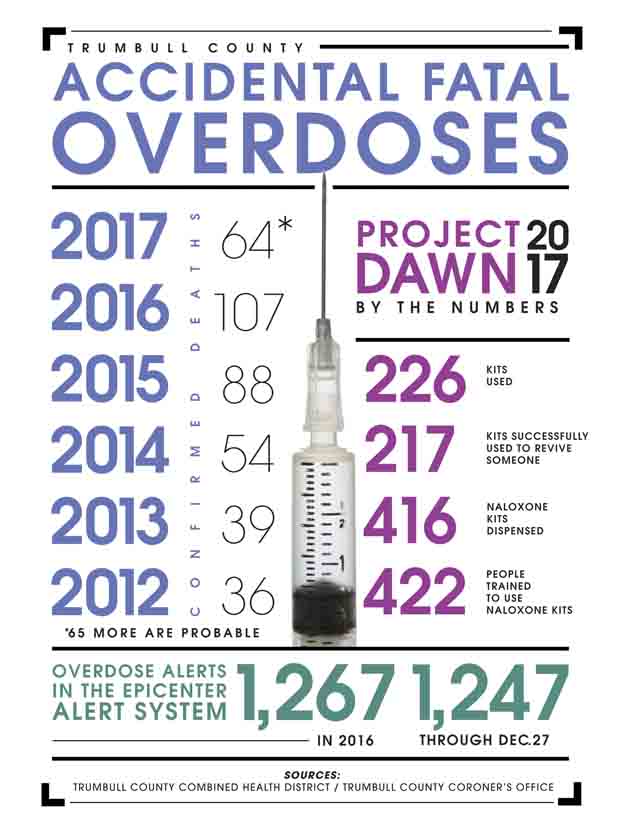 Editor’s note: This is No. 1 of the top 10 stories of 2017 voted on by employees of the Tribune Chronicle.

WARREN — More than 100 dead from acccidental drug overdoses hasn’t been the only effect of another record-setting year in the trenches of the opioid epidemic in Trumbull County.

More kids are living with relatives or foster families because of dependency and neglect, county departments struggle under budgetary constraints responding to a need for services, more police officers have become medics, the county jail is bursting at the seams, toxicology reports lag behind and more families are living without their sons, daughters, mothers, fathers and friends.

But 2017 also has seen the media and lawmakers talking about solutions, agencies getting more involved with substance use prevention, more people on the frontlines getting trained to reverse opioid drug overdoses and officials and individuals alike working to reduce the stigma they say allows substance use disorders to flourish.

“We still have a long way to go when it comes to erasing the stigma of addiction and the understanding of addiction as a disease. There are still negative attitudes and beliefs about the use of Narcan and incarceration as tools in this fight, but as more and more people continue to come to the table and talk openly about what once was a uncomfortable topic, the more potential there is to create meaningful, lasting change,” said Lauren Thorp, director of recovery and youth programs at the Trumbull County Mental Health and Recovery Board. “I am hopeful that 2018 will bring new opportunities and partnerships that will result in groundbreaking programs and innovative ideas. One thing that 2017 has shown me, is that our community is becoming more and more aware, and that we are all in this together.”

There is hope that ground work laid in the past few years will help bring an end to the public health crisis.

In 2017, at least 64 have died from accidental drug overdoses — the majority of whom had an opioid of some type in their bloodstream at the time of their death, and at least 65 others are suspected to have died from the cause, according to the Trumbull County Coroner’s Office.

Trumbull County Coroner Dr. Humphrey Germaniuk has been unable to finalize the status of the remaining 65 deaths because of a backlog in autposies and the length of time it takes to get back toxicology screenings, according to his office.

As the caseload rises at the coroner’s office, Germaniuk is asking for funding to add a position to help him keep up with the work. Communities across the nation struggle to fill forensic pathologist positions and Trumbull County commissioners struggle to find money in a tight budget to assist Germaniuk.

It might be difficult to calculate the cost in dollars that years of addiction to opioids has wrought on the budgets of individuals and businesses or city and county governments.

But in hopes of paying for some of the increased costs to county departments, Trumbull County commissioners in 2017 joined multiple communities in Ohio and other states to file a lawsuit against opioid pain pill manufacturers, distributors and pushers.

The suit came after the Trumbull County commissioners in April declared the opioid crisis an emergency, as did many other Ohio communities, though the state itself did not. President Donald Trump declared a public health emergency in October.

The lawsuit filed in December by several law firms on behalf of the commissioners in Trumbull County Common Pleas Court seeks to recoup costs from 25 different entities for expenses in departments that have had to increase services in response to opioid addiction, like the coroner’s office and the Trumbull County Jail.

The jail is often at or over capacity, said Trumbull Couunty Sheriff’s Major Dan Mason, jail administrator, during county budget hearings in November. The sheriff’s office requested an increase of about 24 percent for operating expenses in 2018 over its $6.32 million 2017 budget.

The cause for the crowded cells? The opioid crisis, Mason said. The cost doesn’t only lead to more spending on obvious items like food and supplies, but also medical expenses, Mason said. And because of the opioid crisis, those expenses are higher than they have been in the past and include more mental health services. Plus, overcrowding at the jail leads to more wear and tear, Mason said.

A full body scanner the jail expended $118,000 on in hopes of increasing security and reducing the presence of drugs in the facility was implemented in September.

The need for the scanner was made apparent with several opioid overdoses in the jail in 2017. Two inmates overdosed in October, three in September and one in April. The inmates all survived the overdoses.

Attention focused on the crisis has led to more community involvement.

“As the project director for the Alliance for Substance Use Prevention (ASAP) coalition, I have watched an incredible growth in not only the number of our members, but in the diversity of our members,” Thorp said. “We have changed from a small group of treatment providers, schools and family members to a coalition made up of law enforcement, politicians, health departments, universities, people in recovery, churches, along with treatment providers, schools and family members. Our meeting attendance has grown to where we’ve had to consider moving to a larger space.”

Thorp said the community involvement — which includeds more people than ever offering their help — has been a “blessing” and is a “testament to the outstanding people in our community.”

There has been a large increase too in the efforts of thereligious community to offer support.

Partnerships have been especially important in developing ways to reach the public and track data releated to the crisis. The mental health and recovery board partnered with the Trumbull County Combined Health District to better track overdoses in 2016. The effort led to the ability to send alerts to the public in 2017, warning drug users, their family members and the treatment community to be prepared for batches of street drugs that were sending a high number of people to the hospital or the morgue several times, including in March and September.

The media also got involved in a new way to make an impact with a collaboration between the Tribune Chronicle, WFMJ, the Vindicator and WKSU through Your Voice Ohio. At well-attended meetings, people at the frontlines of the crisis came together to offer their stories and to pinpoint what needs to happen to end the crisis.

“The media has also become a partner in this fight. Our local media outlets have shown a desire to move beyond the sensationalizing stories and reporting on the things that will be helpful to the viewers,” Thorp said.

“For the past year it has seemed that we have not been able to escape the daily stories of families being crippled by a loved one’s addiction and children who have not ever taken a drug, becoming the youngest victims of this epidemic,” Thorp said.

Children in Trumbull County have found their parents in the middle of overdoses and even dead. Adults have been arrested for having their drugs around children, caring for their children while intoxicated and driving while intoxicated with their kids in the car. Some kids were left alone while their parent was distracted with drugs.

The disturbing trend has left children in the care of grandparents and other relatives and in custody of Trumbull County Children Services.

In Trumbull County, calls for abuse and neglect are higher so far in 2017 than they were in 2016, and there are fewer foster families available to take kids who need care outside of their families, said Tim Schaffner, executive director of children services.

Between 2013 and 2015, the number of kids in the agency’s care soared by 40 percent. And the cause? The opioid crisis, Schaffner said.

“Our kids in custody continue to go up. Our referrals go up. Abuse and neglect calls are up,” Schaffner said. “We are not surprised by this trend, we have been seeing it for a while.”

The agency is holding a meet and greet 5 to 6 p.m. Wednesday for interested families at the agency’s offices, 2282 Reeves Road NE.