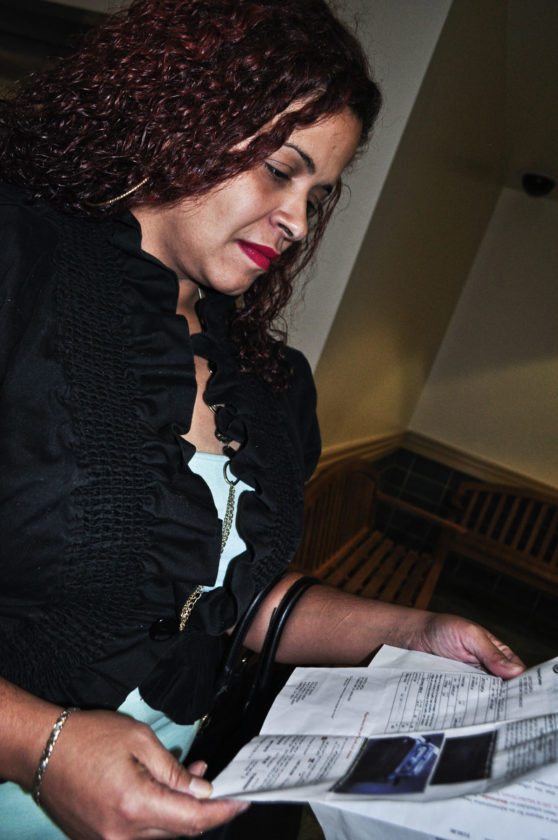 Lissette Garcia of Youngstown said the ticket she received while on Interstate 80 was inconvenient and seemed like a scam. The hearing officer reduced the fine.

That is what some of the people who contested their LiDAR speed camera tickets called the Girard program after a hearing officer presided over the first dispute hearing for the newly implemented speed enforcement program last week.

But, police Chief Jeff Palmer said, the program is working, slowing down traffic, reducing crashes and people who are not speeding don’t have anything to worry about.

One man drove up from Columbus to attend the 5 p.m. Wednesday hearing — the first of its kind in the city. It was held in the municipal court but outside court hours. It was presided over by a local attorney the mayor appointed at a fee of $100 an hour.

Jeff Manross, an information technology consultant, said his trip from Columbus was worth the gas money. Hearing officer Ron Marks dismissed his $150 ticket, but ordered him to pay a $75 court cost, a fee Palmer said he wasn’t aware of and that could violate an Ohio law barring court fees at civil hearings. Palmer said he would look more into the legal aspect of a fee before the next hearing is held.

If allowed, the fee could detract people from contesting their tickets, Palmer said, and maybe a complaint process for individual cases might work better.

About 25 people sat in the court room to contest the tickets, car owners who were sent the first wave of notices after the program’s warning period ended in August.

More than 5,000 tickets­ have been issued since the start in July, Palmer said.

Manross said he has a theory about why so few people disputed the fines.

He said many of the ticketed will just pay the $100 to $150 fine for several reasons. First, he said, many like him are only passing through Girard on the short section of Interstate 80, where the city has jurisdiction and many of the disputers reported receiving their tickets. It is easier to pay the fine and be done with it.

Second, Manross said, the ticket — which arrived in his mailbox a few weeks after one of the handheld police operated devices logged him going 74 mph in a 55 mph construction zone Aug. 8 — contains language designed to make drivers thankful they didn’t receive a traditional violation.

“The ticket isn’t reported to your insurance company or to the state license bureau, so they are counting on scaring you into letting it go and just paying it,” Manross said.

Traditionally, Manross said, an officer has more discretion about whether a speeder deserved a ticket. Taking out that discretion isn’t fair to the people who become subjected to an unethical toll, but also hampers the purpose of speed monitoring in the first place, Manross said. Officers who are pointing and shooting the device, issuing up to four tickets a minute, aren’t in a position on the roadway to go after dangerous drivers; they are, instead, throwing out a net to rake in cash, like a new toll booth, Manross said.

Manross said the way Girard is using the camera by “hiding” on an overpass makes it harder for drivers to see police and slow down. As the officer is drawing up tickets, the real-time traffic conditions aren’t affected by the officer’s presence, which historically deters speeding, he said.

“The idea behind the program is, the mere fact that they are in operation, will eventually reduce speeding; it might not happen immediately, but there is a safety benefit,” Palmer said. “Sure, if the driver isn’t stopped, the deterrent doesn’t hit them right then, but in two weeks, when it comes in the mail, they will think about their speed more.”

In other parts of the city, Palmer said, traffic has noticeably slowed down, with the traffic flow traveling at speeds close to the posted 25 mph, with only a few drivers going over that. The program has reduced serious crashes in the area by half, Palmer said, citing department data comparing crashes in July and August to the same periods going back five years.

The LiDAR machines are being used on the interstate only in the work zone, which is obviously undergoing construction and has clearly posted speed limits of 55 mph, Palmer said.

“We are not camping out there, planning to remain in perpetuity; we won’t be there forever. When the construction is gone, we will revisit where we go, check the data for crashes and re-evaluate,” Palmer said. “But in the meantime, for the safety of the workers and the drivers, we are going to enforce the traffic laws.”

And despite some of the disputers’ claims that there are no signs indicating the cameras are in use — as required by Ohio code — there are signs posted next to the Girard municipality limit markers on I-80, according to visual inspection by the Tribune Chronicle.

There are 13 posted signs in the city, Palmer said. On Friday, the signs were visible, to the right of several closed lanes under construction in the eastbound lane and on the right side of the road in the westbound lane. It is white, about 6 inches by 12 inches and a few feet below the Girard sign.

Grover Diggs of Warren had a different type of hiccup with his ticket. Owning multiple cars that multiple family members use, Diggs said he was absolutely sure he was at work at the time the ticket was issued and said he could bring proof of it. Because of the time that passed, he said he couldn’t be sure which of his family members drove the car an officer photographed speeding.

Marks told him to bring in proof from his employer he was working at the time. It isn’t clear if the hearing officer will charge Diggs a $75 court fee. The ticket comes with a statement that claims the registered owners or lessees of vehicles photographed, “are liable for the violation.”

Lissette Garcia of Youngstown said she got charged $150 as a repeat offender because her son had his own ticket while he was driving her car. Marks reduced the ticket to $100, the cost to a first-time offender going 10 mph over the speed limit. She said the whole program has the feel of a scam and is a big inconvenience.

Jeremiah Davis said he was driving to work in Austintown when he got his ticket. He insisted — if the enforcement warning signs are posted, they aren’t obvious enough, especially in the construction zone.

Palmer said the city has jurisdiction to enforce traffic laws on the interstate and said Ohio code Manross cited that states municipalities have to have a population more than 50,000 to enforce laws on an interstate applies only to townships, not cities.

Manross also questioned the accuracy of the LiDAR, wondering if the machines are really calibrated every day and if they work properly from above the roadway at an angle.

Palmer said the policy at the department is to calibrate the machines before each use, done by pointing the camera at a predetermined spot at a known distance from the parking lot of the department.

“It is a proven technology that is nationally accepted and has been in use for years. In my opinion, its accuracy shouldn’t be questioned. It is a laser beam, target specific. If it were a conical beam, I could see the questions, but it isn’t,” Palmer said.

Still, the program doesn’t sit well with Manross, who said it is a “racket” but won’t continue to fight it.

• $100 — Starting ticket price; goes up $50 for repeat offenses, for being clocked going more than 15 mph over the limit and for speeding in a construction zone

• 40 — Percentage of fines that Blueline Solutions, a Kentucky-based company, takes of fines paid

The Mahoning Valley saw increases of a few COVID-19 cases and an uptick of new deaths in Trumbull County, according ...

The average price for a gallon of gasoline in the Warren-Youngstown and Niles areas is $2.18 and $2.14 per gallon, ...

LIBERTY — A Liberty man turned himself in to township police Monday evening on charges stemming from the early ...

NILES — Closed Levin Furniture stores in Niles and in Boardman will not reopen under a new version of the ...

WARREN — Warren city officials are exploring the legalities of requiring masks within the city, and are expected ...